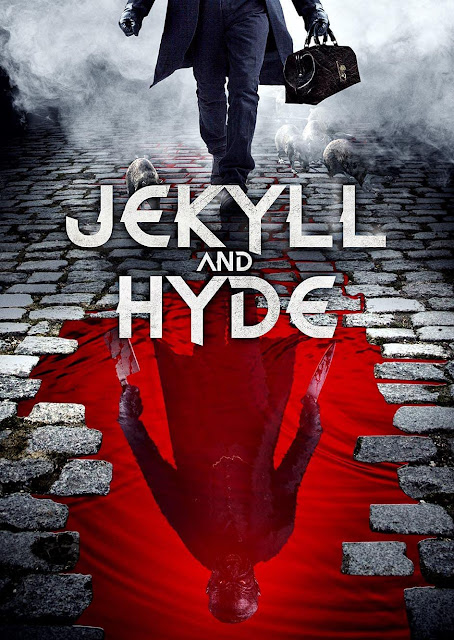 I was very unsurprised after watching Jekyll and Hyde to discover that the writer and director, Steve Lawson (Pentagram), was also responsible for Ripper Untold. Both take place in roughly the same time period, both are takes on popular subjects (this case an adaptation of Robert Louis Stevenson's The Strange Case of Dr Jekyll & Mr Hyde), both feature low thrill, low budget and sedate stories, both have the same use of exterior and interior locations to try and conjure an image of the late 19th Century, and both even have nearly identical covers!

Nearly everyone is aware of the classic story this film is based on, but here things are handled a little differently. Dr Jekyll (Michael McKell - Pentagram), a close family friend to lawyer Gabriel Utterson (Tom Hendryk - The Haunting of Alcatraz) is found dead by apparent self inflicted gunshot wound. On his person is a confession stating that he was responsible for a number of recent murders of prostitutes. His letter states that he created a potion that changed him into someone full of evil urges that compelled him to kill. Gabriel is convinced his friend could not have committed these crimes and so sets out to discover what really occurred. The more Gabriel investigates however, the more it seems that Jekyll really may have been the man responsible, something Inspector Newcombe (Mark Topping - Bram Stoker's Van Helsing) is all too keen to point out. 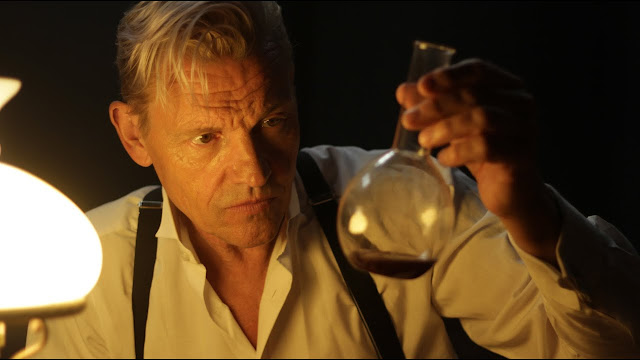 I was expecting a typical re-telling of the story and so was surprised to see Jekyll dead within the first ten minutes. When Gabriel finds the confession and upon reading it a flashback begins, I expected this would make up the rest of the film, and would be a way for the story I expected to come forth on screen. I was then double surprised to see this flashback made up only a tiny part of the movie. The main plot of the film is Gabriel trying to prove his friend's innocence. He does this by flitting around a couple of dimly candle lit rooms, speaking to various characters. Like Ripper Untold before it, this is a low budget film that features lot of talking and not too much else. Victorian England is represented by nearly entirely these dim lit rooms, the only outside moments are shown as brief establishing shots, either close up images of buildings, or a horse drawn carriage turning up at Jekyll's mansion. I almost expected Newcombe to be the same character from Ripper Untold, and I wouldn't be surprised to find out that this re-uses the same sets from that film. There is a disconnect between the bright and well lit outdoors shots and the perpetually dark interior shots, they didn't seem to fit together cohesively.

The story had some twists to it that were not expected but was relatively low-key. The crimes of Jekyll are shown via short flashback sequences, with special effects kept to a minimum to sell any type of violence. The actors had some good choices, I enjoyed McKell in Pentagram, and here he was another highlight. Of course this actor plays both the parts of both Jekyll and Hyde, and looks suitably evil as the later. Hendryk was decent as the protagonist, though the character came across as a bit of a buffoon, a likeable one though, I thought Helen Crevel (Curse of the Witch's Doll) was good in her role as Gabriel's wife, even if she didn't get much chance other than to stand around talking. That was the case for a lot of the characters here, was certainly a low thrills movie. 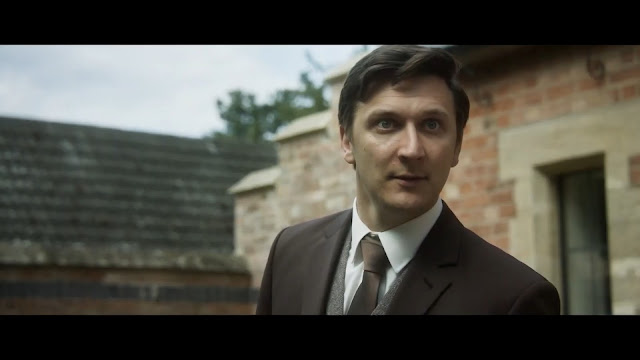 I enjoyed Ripper Untold and as Jekyll and Hyde was almost the same film, at least in terms of the flow and the peaceful pace, I enjoyed this also. Due to the similarities in film making it didn't really do too much to stand out on its own, but I did like the changes it made to a story I was pretty convinced I would know what to expect with. Jekyll and Hyde is due for release later this year from High Fliers Films.