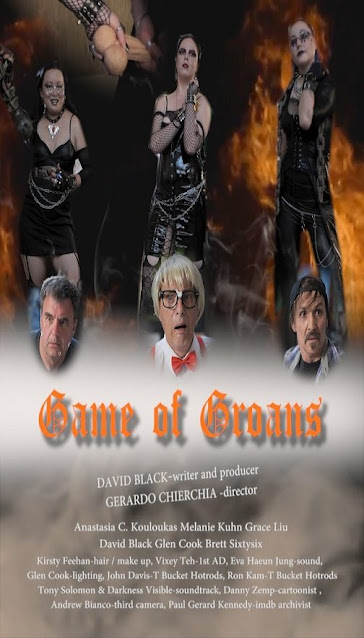 Game of Groans is the latest short film from the prolific David Black (Sinister Symbiosis, Badass Bunyip), this one with a script by Black and directed by Gerado Chierchia (Toxic Alien Zombie Babes from Outer Space, Time Goddess). As the title should suggest, this is a comedy, and as always, features humour that doesn't really appeal to my tastes.

Black reprises his role as the nerdy Darvis (last seen in Time Goddess), and is at his clubhouse playing monopoly with his equally nerdy friends Kenobe (Glen Cook - Badass Bunyip, Little Miseries) and Kelvin (Brett Sixtysix - Toxic Alien Zombie Babes from Outer Space, Badass Bunyip). Without warning the clubhouse is invaded by Lucifer's Ladies, a three strong, all female gang made up of Annabashya (Anastasia C. Kouloukas - Badass Bunyip, Sinister Symbiosis), Melcontent (Melanie Kuhn - Dark Ditties from Down Under, The Last Hope) and Graceless (Grace Liu - Cahya, Colony). The gang assault the three men before suggesting they all play a game. Darvis agrees to this as he hopes to get something good out of it should he and his friends somehow win, but they may get something quite different to what they expected. 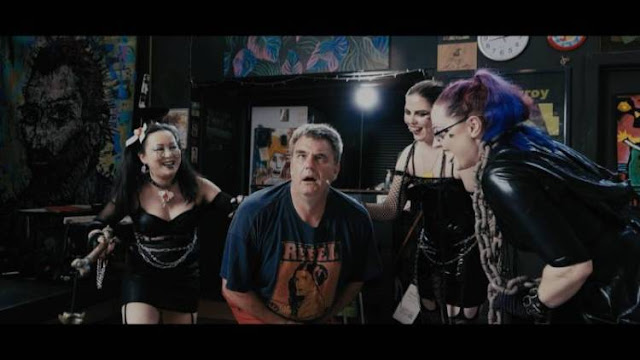 For me this started off well, an intro sequence that features a car revving in a carpark. I also liked the introduction of the gang, complete with their own credit sequence. The humour was quite puerile and gross, such as Darvis being tricked into drinking urine, and some purposely fake looking genitalia on show, so none of that appealed to me. What was obvious was that the cast appeared to be having fun in their roles, all of them putting a lot of energy which created a feeling of cohesive unity,. It ends on a slight twist that was expected, but was a fun way to end this. The humour means that what could have been an unpleasant story came across as more cartoony, which worked in its favour, especially during a key fight sequence.

While the comedy here didn't appeal to me, I still thought this fifteen minute short was enjoyable to watch. There is a consistent style going on and was less rough around the edges than I expected it to be. Game of Groans can be seen on YouTube, here.