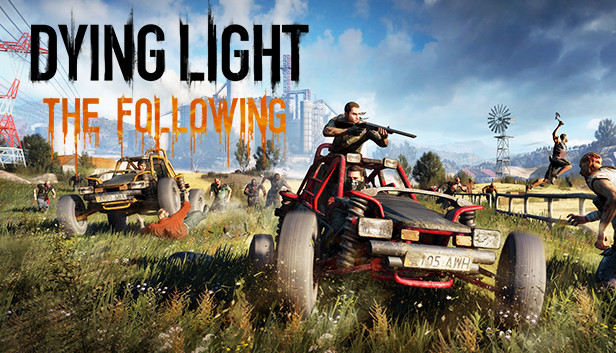 I really enjoyed playing Dying Light and so when a sizeable expansion was released (titled The Following) I happily snapped it up. Fast forward some six years later and that DLC was still sat unplayed on my Playstation 4. With Dying Light 2 coming out I thought it was about time I returned to to the original to finish things off, but after playing this ill suited expansion I almost wish I hadn't bothered.

A mortally wounded stranger appears in the zombie infested city of Harran and before he dies he speaks of a cure that has been discovered in the area surrounding the city. With map in hand, the protagonist Kyle Crane (voiced by Roger Craig Smith - Batman: Arkham Origins) heads into the nearby countryside in search of this cure, as the supplies of the virus suppression drug Antizin has almost ran out at the HQ of the main survivors in the city. It is not long before Crane learns there indeed is an apparent cure, a strange cult named 'The Children of the Sun' are said to be immune to the undead, as are its followers, and with this knowledge in hand, Crane sets out to infiltrate the cult and discover the secret to their thriving in an undead world. 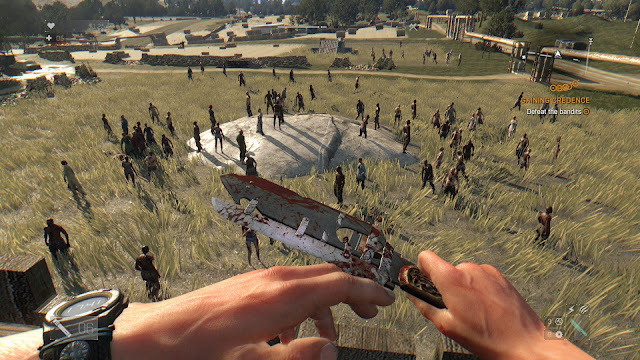 The Following is around a ten to twenty hour experience that takes place in an open world setting that is bigger than the base game's two maps combined. Much of this setting is open countryside, while there are a few small towns dotted about the place. To make up for this huge area you get provided with a buggy, this buggy provides you with a new skill tree, points are earned for this skill tree by doing stunts and running over zombies. The buggy, while a neat idea on paper, is what really ruins this DLC. There is only the one vehicle in the entire game, it requires constant repairing of five different key parts, as well as fuel to keep running. Should you accidentally flip over the buggy then there is no way to put it right again, the only option is to slowly traverse the giant world on foot until you can get to a safe house and respawn the vehicle. That wouldn't be such an issue if the buggy wasn't so notoriously difficult not to flip, I literally lost count of the amount of times I was in absolute nowhere and my buggy either got jammed on a bit of the scenery or got knocked over. This made traversal a real headache, add in to this equation of misery a complete lack of a fast travel option and frustration station was the place I spent far too much of the playthrough at. Dying Light wasn't designed to be an open world game with a vehicle, try as they might the antiquities of the base game meant the developers really didn't think things through. It's made even more annoying that quests typically bounce you from one extreme of the map to the other.

I will include here a paragraph of what was good about this DLC. Firstly, despite being a game from six years ago this really holds up graphically, I was impressed with how good it all looks. I also thought the story was decent, and was reminded how much effort has been put into the side quests in this game. They may typically just have you travelling from point A to point B for some sort of McGuffin, but there is a lot of exposition from characters you interact with. The main storyline has some interesting ideas to it, and naturally fits in the antagonists from the main game. It was also nice that you bring along all your unlocked skills and all your inventory from the main game, the flipside of that was that there is no tutorial, so starting this up after a six year gap meant it took far longer than I would have liked to be able to get back into the swing of things. The day and night cycle is effective, the weather effects are neat, and the visual splendor of a field of zombies was always pleasing. As weak as your buggy is, when you are plowing through the undead with each hit registering as a rumble in the controller it was darn immersive. 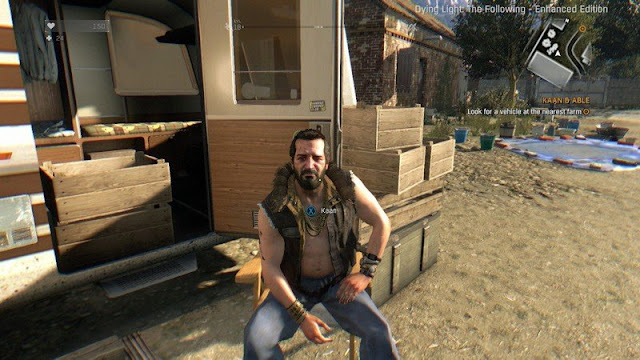 I didn't actually complete The Following, I made it up to the final mission but the broken mechanics of the game led me to do a rare rage quit. Without spoiling the plot, the final mission gives you a six minute time limit to race your buggy from one side of the map to the other and then climb a large wall. The problem was, and this was a huge problem, any fuel you consume in an attempt remains consumed when you next try. This led to the farcical issue many attempts in of constantly starting the mission with next to no fuel. Due to the stakes being high there were plenty of enemies on the road you have to travel, meaning when you stop to try and liberate some fuel from abandoned cars you are very likely to get swarmed. To make things even better, any health you consume on an attempt remains consumed. By the time I rage quit I had no medpacks left at all (I had used over fifty medpacks during my many goes), and the game world had transferred into the much more deadly night (time also continues passing throughout each attempt). I estimate I must have drove across the game world in this final mission some thirty to forty times at five minutes a pop. Even when you get to your objective things continue to be miserable, having to climb a huge wall with the very suspect climbing mechanics (that are more than likely to have your protagonist randomly leap off to his death mid-climb) meaning there were no end of baffling fails.

Dying Light: The Following seemed like a good idea on paper. Instead of a huge city you have the rolling countryside, but without a useful means of getting around (whether by fast travel options or a more reliable vehicle) this turned into a real tragedy. Kudos to this still looking good all these years later, but boy, this sure is a nightmare dressed like a daydream.

Posted by Daniel Simmonds at 11:33