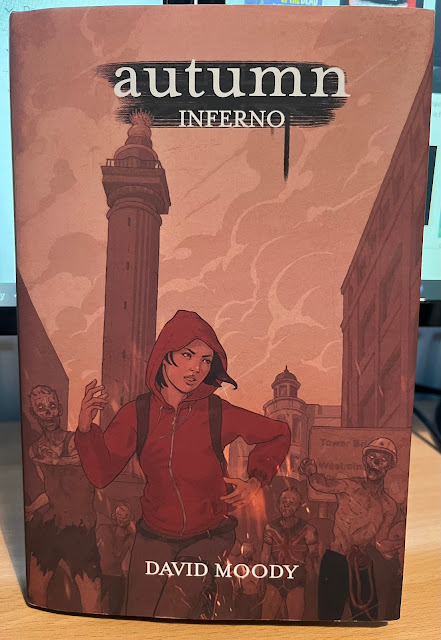 Autumn was one of the first ever zombie novels I read and that series has remained my absolute favourite ever since. There was something about the ever present crowds of dead that just made my introverted self shudder. I'm going to try not to go over too much of what I said in my review of last year's Autumn: Dawn other than to say it is still so cool that a new trilogy of books set in this universe were being written. Even more cool was seeing that I was quoted in this second book, Autumn: Inferno! Off topic somewhat, but I read two thirds of this on a Kindle, the last third from a book proper, it confirmed that it really is more satisfying to read a physical rather than digital format. As a warning, there will be unavoidable spoilers from Dawn to follow.

It is now seventy two days since the world essentially came to an end, with 99.9% of the world's population dead, the majority of them resurrected as walking corpses. Once again the setting is London, with the three hundred strong group centered around the Tower of London now in a desperate battle for survival. It becomes clear that the downside of having such a large group of people is that they require a lot of food. The plan is to find enough supplies to make it through winter, with it hoped that by the time spring comes around much of the undead will have rotted away. To get more supplies the group need to claim back more land from the unending horde, but to do that creates a lot of noise, and noise brings with it the attention of the dead...

A lot of Dawn had survivors out in the zombie infested streets, so this becomes almost the opposite, with much of the story taking place within the fragile safety of the area around the Tower of London. This means technically the stakes are lower, though it becomes increasingly clear that perhaps having such a large and noisy group of people in one area of a silent city is not a great idea. Reading Inferno brought to mind the contrast between this and the old style of Autumn novels. The first book had just a trio of characters deep in the countryside trying to be quiet, here, the falsely placed confidence of the group means many of them couldn't care less about the noise they are making. It was interesting to get an opposite take on survival and the reasoning behind character's actions. One thing Dawn didn't have was as hateable an antagonist as the sadistic teenager Webb, here that is righted somewhat. To me Piotr always had potential to take that place, the muscle to Dominic's brain, this man seemed like what Webb might have been like if he had been older. It was interesting to have an antagonist but still within the context of a semi-civilised group, with the divide between dictatorship and democracy becoming apparent, both Dominic and Piotr almost getting drunk with power rather than really thinking about the consequences of their actions.

Moody delighted me in Dawn by turning his undead into a literal sea of corpses, this time around things are viewed from a different perspective with much descriptions as to what thousands upon thousands of corpses crushed up against the survivor's barricades would actually look like. It was quite icky the look into what a solid mass of fused and leaking corpses would appear as, really quite grotesque and really quite cool. Sometimes the more simple descriptions are the most effective, the part which stuck most in my mind was the line "But all his whining did was make more of them scuttle towards him like broken spiders". There are endless ways the hundreds of thousands of undead are described here, in a way that makes the image in your mind's eye so vivid, it never got old.

By the time I was two thirds into the novel I did begin to wonder just what the 'Inferno' in the title referred to, but right around the corner this became apparent with the third act abruptly bursting into action like...an inferno. This whole final part was deliriously exciting, I was completely hooked once again, almost having to pinch myself that it was 2022 and I was reading a new Autumn book.
Dawn ended on an optimistic note, many plot threads unresolved but seemingly many problems , solved. Inferno ends on more of a cliffhanger, but with a clear goal set out for the survivors to follow.

Autumn: Inferno was a good middle book, it both builds on what has come before and sets up what is to come. The relatively more secure position characters find themselves in allows it to focus on the dynamic of the group rather than the threat without and is a good counterpoint to what has previously been explored. Much like at the end of that first book, I find myself excitedly awaiting the next one, this new trilogy continues to show just why Moody is the master of zombie fiction, especially when it comes to his unique take on the undead.