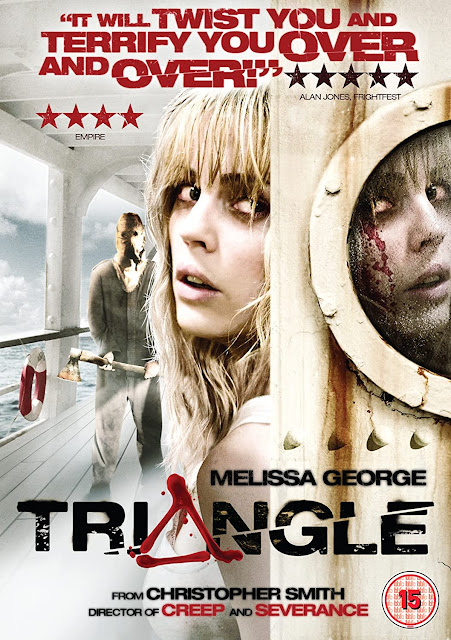 I have wanted to see Triangle for over a decade now, and that desire couldn't have been too strong as I have owned it on DVD for much of that. This was written and directed by Christopher Smith (Severance, Creep) and I feel it was ahead of its time. At the moment the concept of a time loop is very much in vogue, back then, with the exception of a few outliers such as Groundhog Day, not so much. The biggest reason I wanted to see this was that my local cinema heavily advertised this in trailers for months leading up to its release, but subsequently didn't actually bother to end up showing it, so finally, today some thirteen years later, I have managed to finally give it a view.

A group of friends have arranged to go out on a yacht for a day trip. These friends include Downey (Henry Nixon) and his wife Sally (Rachael Carpani), Greg (Michael Dorman - Daybreakers), his friend Victor (Liam Hemsworth - The Avengers), as well as Jess (Melissa George - 30 Days of Night) who has been struggling with caring for her autistic son. They soon run into trouble when a bizarre storm appears out of nowhere, it ends up capsizing their yacht, but luckily they happen to get the attention of a passing ocean liner and are rescued. They are puzzled to find the boat appears to be deserted, and during their search for any sign of life they run into trouble with the appearance of a masked gunman who seems determined to kill them all. 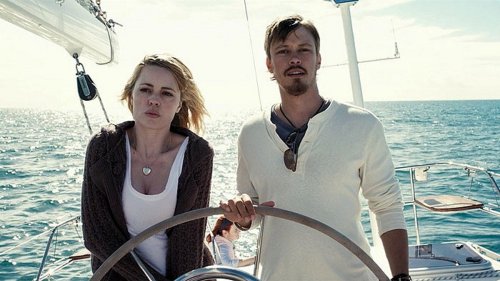 Writing about this it is really hard to work out how much of a spoiler to give, I think I will stop with what I have already said, that this is a time loop film. Jess is the film's protagonist and it is her journey that we follow, making sense as she becomes the only character to realise they are trapped in a time loop and the only one to experience multiple loops. What was clever here was that this isn't a loop that exists on its own, instead the loop is happening in the exact same place, so if someone is killed in an earlier loop their corpse will still be there to see when time repeats. Much is made of this concept and I have to say I was impressed with how involved this was. It is rare I would recommend a rewatch of a movie but there is much here that would give an entirely new light on a subsequent watch. You have clues dotted throughout that are not obvious at all when they appear, only with later knowledge do events become a lot more obvious. There are even scenes that play out, and then later on these scenes are extended in both directions to create an entirely different feel. The power of editing is evident throughout Triangle.

My complaints mainly stem from the dull characters here, all, with the exception of Jess don't have anything to their personalities, all are forgettable one note people. I didn't even bother mentioning the character of Heather (Emma Lung), she was another friend on the yacht but is in the movie for all of five minutes before she gets washed away during the storm scene. Her character adds absolutely nothing to the story at all, other than initially it is believed that she somehow made it onto the ocean liner and was the one making the random noises the friends hear, something which at the time, first loop around seemed far fetched. Another problem with Triangle was Jess' behaviour when she discovers she is in a loop, she goes out of her way to avoid her friends, It's never explained why she is trying so hard to avoid detection the first time this occurs, as she wants them to know what is happening. I had problems with Jess as a whole, but that is only until later revelations turn those issues moot. 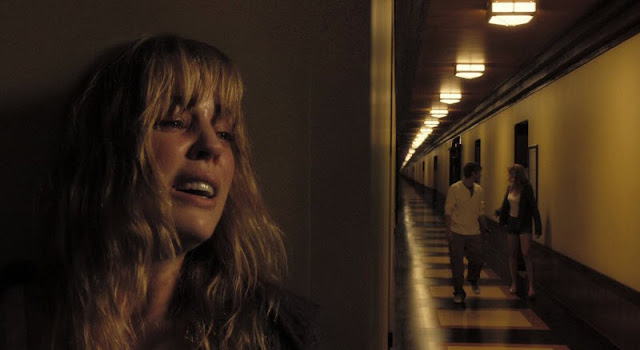 The horror here comes more from the situation than of the burlap sack wearing killer. There are some moments of violence, but nothing too graphic outside of some gunshots and knife wounds. I really enjoyed how clever and entwined this got, how seemingly every single thing that occurs can later be revealed to have had some special meaning. It leads up to a head scratching ending, one that made me go away and think about what had occured. While I had some issues with the bland characters, overall Triangle was enjoyable and went further into loop based shenanigans than I had anticipated, certainly a great thing to do.