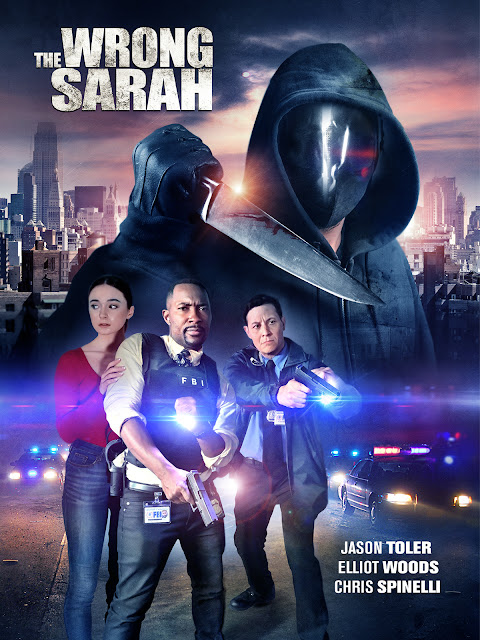 The Wrong Sarah is a crime thriller that follows an F.B.I agent's hunt for a serial killer. Written and directed by Jason Toler (who also stars in this), this somehow retained a chilled vibe despite the subject matter, while the relatively short length (at just over an hour) made this easy to get through.
F.B.I agent Jack (Toler) is in charge of the investigation into the 'black rose' serial killer, so called for leaving a black rose at the scene of his crimes. The man targets young females named Sarah, apparently seeking out one in particular due to his habit of writing 'wrong Sarah' near every victim's corpse. After Jack gets a clue as to the identity of the killer's next potential victim, he races to L.A in order to protect a young woman named Sarah Thomas (Elliott Woods - Amityville Cop).
There were a bunch of familiar faces in The Wrong Sarah, so it was fun spotting all the actors I recognised from previous films they have worked on. Sarah's mum is played by Lisa London, a fellow agent of Jacks is played by Chris Spinelli, Sarah Brine makes an appearance as an earlier victim of the killer, while Shane Ryan-Reid also features, these I have all seen previously in Heartbeat and Choke among various other films. Elsewhere some of the casting choices seemed slightly odd, especially during the first F.B.I scene in which one of the team members looked to be about fifteen years of age, so was a bit distracting.
Seeing the calm and collected way that Toler portrayed Jack was a breath of fresh air after the last crime thriller I watched, Spiral: From the Book of Saw in which Chris Rock butchered a similar role. Toler helped create a chilled vibe, with the exception of the killer himself all the characters seemed subdued and peaceful in their actions. As to that killer, he had a cool mask but there wasn't much to his character. With the eventual reveal of who he was there was lacking a sense of satisfaction, he just came across as a generic crazy bad guy with dull motivations. I enjoyed the relaxed atmosphere of the movie, aside from an ill advised sex scene and odd feeling romance I didn't have much fault with the rest of the story, it played to the limitations of its budget well.
There are a fair few bodies to be found here, mostly being discovered by Jack and his team, with only a couple of short scenes of the killer interacting with his victims, the corpses had make-up effects.
The Wrong Sarah wasn't a bad way to spend an hour, it wasn't the most action packed and exciting thriller out there, but it told its story in a way that mostly didn't waste time with needless scenes (outside of the previously mentioned sex scene, as well as an over long montage of Jack working out at the gym). The Wrong Sarah can currently be seen on Amazon, Vimeo and Tubi with more platforms getting the film in future months.
SCORE:

Posted by Daniel Simmonds at 06:37