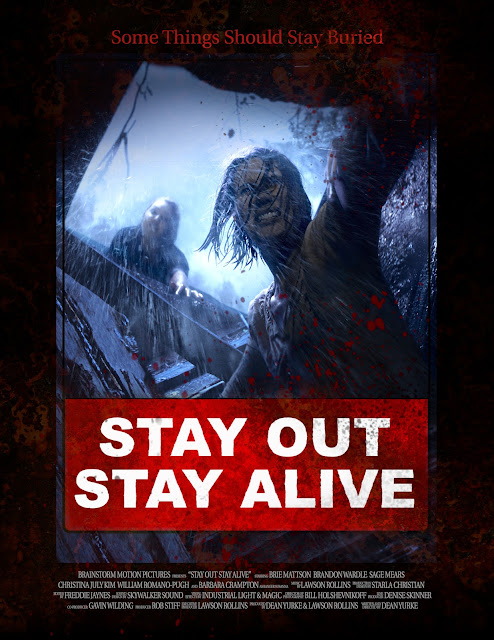 Stay Out Stay Alive was written, produced, and directed by Dean Yurke, a first for himself in all those roles. This didn't get off to a great start, some dodgy acting and a strange pace, as well as a really silly story all combined to make me have some trepidation. I was almost shocked to discover just how enjoyable a horror this actually turned out to be in the end.

Donna (Sage Mears - voice work on DmC: Devil May Cry), her sister Bridget (Brie Mattson - Agents of S.H.I.E.L.D TV series) and her boyfriend Reese (Brandon Wardle - Bumblebee), as well as Kyle (William Romano-Pugh) and his girlfriend Amy (Christina July-Kim - Office of the Dead) have all gone on a camping trip in the redwood forest. On the first night Donna goes missing, the next day her friends discover her at the bottom of a hidden mine at the bottom of a ravine. She had fallen in and in the process managed to get her foot wedged under a large boulder. Initially the friends all decide to go and get help from the forest ranger, Susanna (Barbara Crampton - We Are Still Here, You're Next) but the discovery of a large amount of gold in the mine halts these plans. The friends, with Donna's blessing, decide to instead spend a few days gathering as much gold as possible, and only then going to get help for the trapped (and also I will add, pregnant) girl. As time passes the friends begin to change, becoming obsessed with getting as much gold as possible, and in their pursuit of this goal go to drastic lengths from which there is no returning. 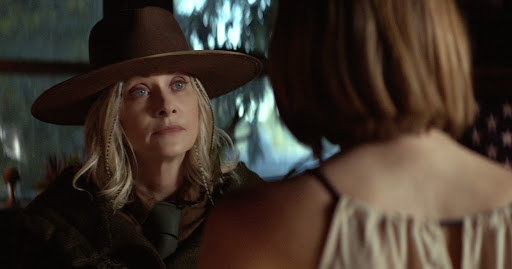 The biggest hurdle I had to get over while watching this was the ridiculous concept that the friends would much rather steal gold than help out their trapped friend. This was made even more stupid in that Donna was perfectly happy to remain trapped for days on end for this to occur. Later in the film there becomes a supernatural element, a curse on the land is slowly changing the characters behaviours so that they become crazed with greed, but initially this isn't the case. This marred my enjoyment of the first act but things do become a whole lot better. The story does not take long to get going, in fact, within around ten minutes the heart of the film has been established. I liked that the horror here was an insidious one, there are ghostly figures to be seen but only fleetingly, instead it is the characters changing behaviour which carries a lot of the horror. Things got quite dark here with lines crossed that can't be uncrossed, I was surprised just how events played out, and I liked the rustic low-key music that played out over many of these scenes of darkness.

The acting wasn't the best, not helped at all by the wooden dialogue which was full of cliches, it became easy to predict what characters would say to each other. Despite that I did think the breakdown in the friends behaviours was well done, this at times made me think of The Shining, but set in a small mine instead of a hotel, this even applies to the vaguely generic but still fun ending which aped aspects of that film's ending. Special effects worked, some better than others. The spirits had a slightly CG look to them but they were used very sparingly and in dark settings and so were not jarring. There were a couple of painful looking falls into the mine shaft, and on that note the set design itself was cool. The mine had a certain character to it, the found diary there adding background details to the peril. 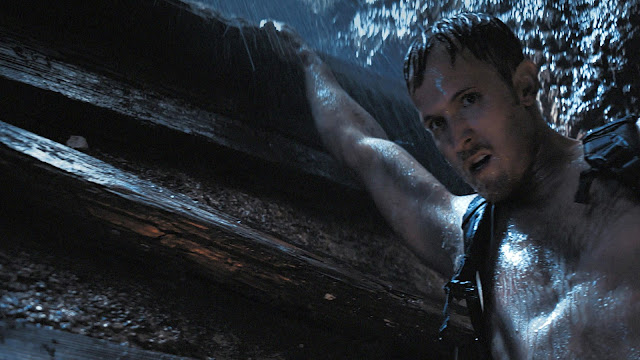 Stay Out Stay Alive really improved the more it went on, character motivations improved with the knowledge their minds were being affected by a curse, though I could never completely forget the stupidity of their motivations in the movie's first half. This became atmospheric and thrilling by the end, it may be very dumb but it was also a good piece of escapism. Stay Out Stay Alive releases on 13th June thanks to High Fliers Films.

It's hard to believe it's been 10 years since you reviewed one of my first comics.

There's been a few more since then which you can check here:

Time really does fly it's good to see you are still keeping busy, I will check out the links, thanks for the info.