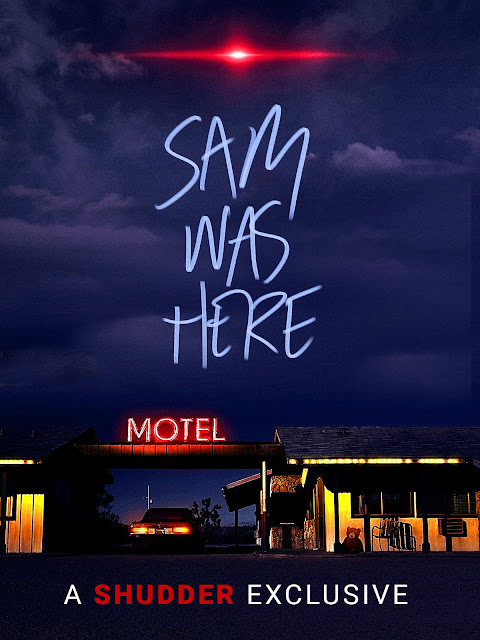 I have intended for 2022 to be the year that I spend more time watching films of my choosing rather than solely watching horrors sent to me for review. I found the Christophe Deroo written and directed Sam Was Here towards the back end of my Shudder queue and I admit I chose to watch it based on its short running time of seventy five minutes. This remains Deroo's only feature length movie he has created and it stands apart as a very mysterious film, style over substance, but that is one of the things that I really appreciate in films.

Sam (Rusty Joiner - Resident Evil: Extinction) is a travelling salesman who is travelling through the Mojave Desert back roads of California in order to get home to his wife and young daughter. After his car breaks down he is baffled to find everywhere he visits deserted, yet with signs of people having recently been there. He also finds he is unable to contact anyone on telephones, either receiving dead ringtones or answer phone messages. The only bit of normality he does find is a local radio station hosted by a man called Eddy. The radio show is talking about a killer on the loose and the more Sam listens the more he begins to realise that the person being talked about is himself. Soon he finds himself hunted by the inhabitants of a rural community who want the confused man dead. 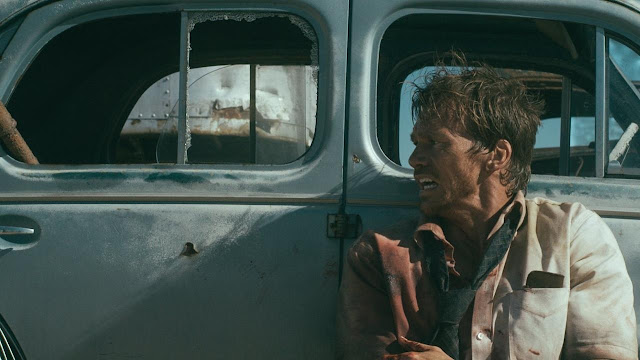 I had read beforehand that this film was like an episode of Black Mirror if it had been directed by David Lynch, I can kind of get that. While not as surreally nasty as Lynch's work can feel, this had its weird moments that really did give off a vibe such as that. For one thing you have a strange red light constantly showing up, both far off in the sky, and closer to home. Then you have the story that is a slow burn of limited reveals. I fully expected the film to loop around on itself like Lost Highway, it had a similar kind of vibe at times, I also expected maybe this was a Twilight Zone style hellish afterlife in which a bad person is forced to face endless persecution. Instead the film ends with nothing explained which I can see frustrating some people. There is plenty of suggestions throughout but nothing concrete or definite is ever given. Apparently Deroo said of the film that the only part of Sam Was Here intended to be understood was the atmosphere, and the paranoid desperate journey of Sam's, punctuated with moments of brutality certainly maintains a cruel atmosphere all the way to its finale.

Joiner for a good 75% of the movie is the only character on screen, though much of the dialogue is carried by Eddy and the various people calling into his show. He does a good job in a heavy role, a believability to his early actions. Just when it felt like he would be the only physical character in the whole movie we then get the introduction of other characters, though ones who wear grotesque masks and who never speak giving them a hallucinatory quality. The fight scenes are full of messy fighting and always looked effective. The sparse locations have minimal effects required but when they are used they fit in perfectly. Accompanying this is a great score composed by Christine, eighties style synth that reminded me of the soundtrack to the video game Hotline Miami, fantastic stuff that added a lot to the atmosphere of the movie. 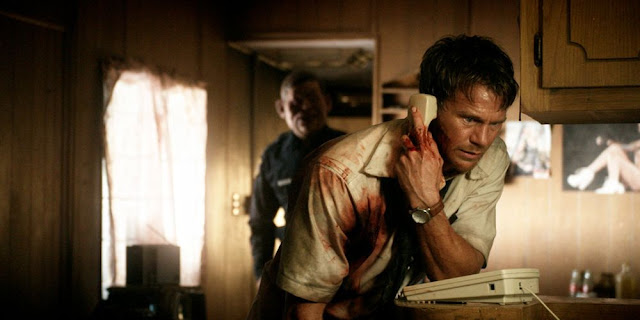 If you are a firm fan of style over substance you will enjoy Sam Was Here, I found myself glued to the screen, especially during the third act. It may not have provided any answers by the time the end credits roll around, but it sure was an atmospheric journey, and it at least provided many suggestions. Sam Was Here can currently be streamed on Shudder.