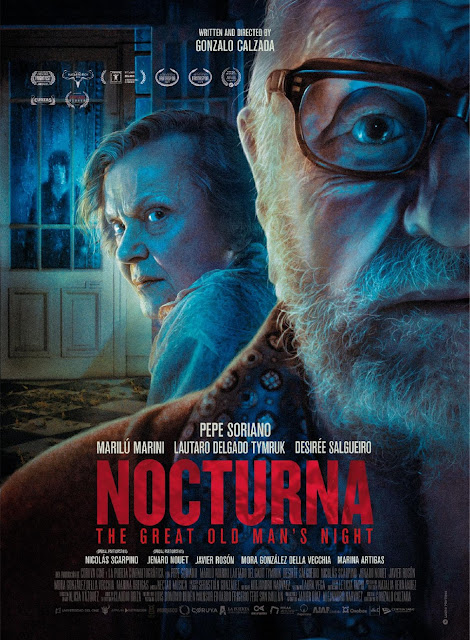 As the title may well suggest, the Gonzalo Calzada (Luciferina) written and directed Nocturna: Side A - The Great Old Man's Night has been designed as a double bill, its sister being Nocturna: Side B - Where the Elephants Go to Die. I thought the poster for this film was great, and it is a rare occurrence where the quality of the film matches up to the quality of the poster. Despite being in Spanish I found this to be a really affecting film, one that I admit reduced me to tears by the end of its one hour forty five minute run time.

Ulises (Pepe Soriano) is an old man approaching his hundreds who is steadily becoming senile. He lives in an apartment with his wife Dalia (Marilú Marini) and both live in fear of being evicted from their home due to their advanced years becoming an issue with the patient building superintendent, Daniel (Lautaro Delgado Tymru). The film takes place over the course of one long night, a night in which a neighbour from upstairs plummets to her death in the couple's courtyard, yet after this mysteriously keeps appearing at their door pleading to be let in. This and other events causes Ulises to reflect back over his long life and become mindful of his biggest regrets and mistakes that he hopes to somehow atone for before his own death. 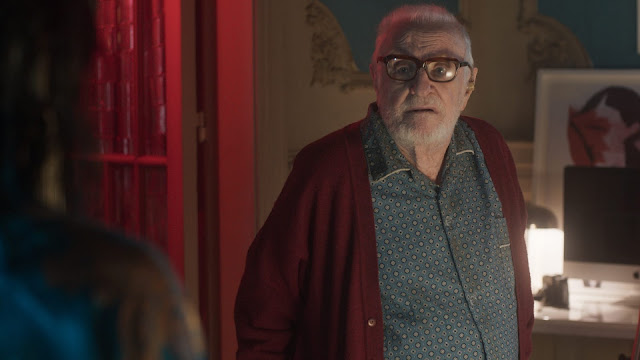 First off special mention has to go to the acting here. Sure, I don't understand Spanish, but no character seemed to be a poor actor, Soriano in particular was a real highlight. Despite not understanding the language, he brought a tremendous believability to his role with his actions and expressions bringing over way more than just words ever could. The vast majority of the film rests on his shoulders, to my knowledge he is in almost every single scene and not once does he give anything other than a powerful performance. His senile moments feel real, and his role was such a bittersweet sad one. When Ulises and Dalia are scared it feels authentic, the way they act around each other with almost resentment between the two, yet a shared love brought about by spending most their lives together. Ulises was not a happy character, there is so much in his life that hasn't gone as he would have liked, with a son who barely visits, to an estranged daughter, the sadness and sorrow is reflected so deeply on him, especially in the moments where his failing memory upsets him.

One of the themes that Nocturna: Side A brought to the table was dealing with and accepting death, this was carried out in a more humanistic feel than the muddled attempt M.Night Shyamalan had with Old. It was this that resonated with me, I'm swiftly approaching forty and getting somewhat of a mild feeling of a midlife crisis. Here, with the constant flashbacks to when Ulises and Dalia were young teens you feel the sorrow and heartache that comes from Ulises' bittersweet memories. Often the film plays around with this reflection with plenty of scenes where old Ulises is replaced with the teenage version of himself, and vice versa with Dalia. The soundtrack perfectly supplements this bitter heart wrenching feeling of loss, combined was what reduced me to tears during the end of the movie. The only issue I had with that was a few moments towards the end when it felt like the story was all over, only for it to start up again before bringing it back to another false end. 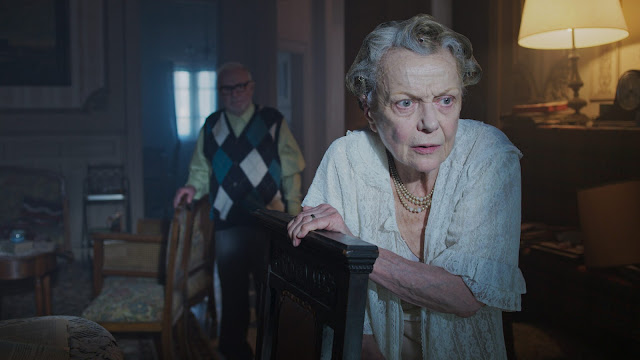 There is also a definite horror part to the film, this mainly comes from the upstairs neighbour, Elena (Desirée Salgueiro) whose constant bizarre appearance at the apartment door provides a supernatural vibe. At first I figured the film would have a twist and thought myself quite clever at having 'gotten' it, in a way I was correct, but there was far more to this, something to which there are plenty of obvious clues throughout Nocturna: Side A, but which still had a powerful impact when it was revealed. Whether the ghosts are real, or part of Ulises senility made up a large part of the puzzle for me but their inclusion was effective, especially considering the old age of the protagonist who obviously would not be able to defend himself in any type of conflict.

The only parts of this film that I thought brought it down where when the slow burn feel affected the pace, especially towards the end with its many false endings. Looking outside of this and there really is not much to complain about, the acting is superb, the set design is fantastic, the cinematography, directing and editing are all amazing, and then there is the soundtrack that really brings everything together in a way that became really affecting to me. A bittersweet, mournful and heart wrenching slow burn horror that felt like something real special. Nocturna: Side A - The Great Old Man's Night, as well as Nocturna: Side B comes to Digital on January 18th, with a DVD release of The Nocturna Collection arriving on February 1st.

Posted by Daniel Simmonds at 10:36