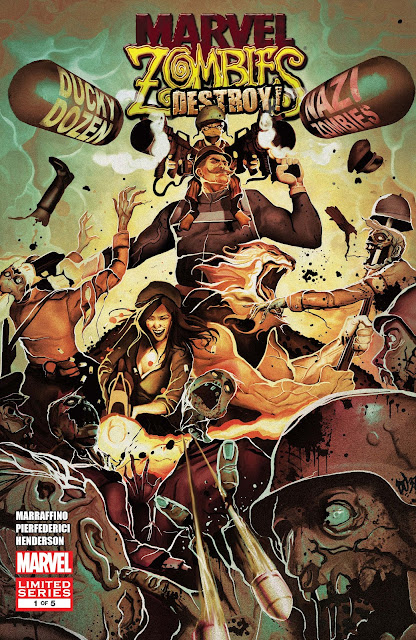 There is currently a Kickstarter running to get funds to make a Zombicide board game based on the Marvel Zombies property. It looks amazing, but alas, the price is too steep for me. Currently, to get everything, which includes the base game, the X-Men Resistance, Galactus the Devourer, Fantastic 4: Under Siege, Guardians of the Galaxy Set and Hydra Resurrection expansions would cost $550 (around £410). So, sad news for me not being able to stomach that cost, but it did remind me that I was still part way through my reading of all the Marvel Zombies graphic novels. There were five main graphic novels and since then a series of seemingly unrelated goes at bringing everyone's favourite (and more obscure) heroes into the rotting world of the undead. The last one I read was Marvel Zombies Supreme back before the pandemic struck, and now I have read Marvel Zombies Destroy!
Howard the Duck, working for A.R.M.O.R has recruited a whole bunch of heroes for a very dangerous mission. It turns out there is an alternate reality in which the Nazis won the second world war by unleashing a zombie virus that changed their soldiers all into zombies. Having completely conquered their world, they now seek to create a device that will allow them to invade other realities. Leading the team of heroes, alongside Howard, is Dum Dum Dugan, a former Howling Commando. Their plan is to travel to the zombie reality and destroy the Nazis stronghold. An already impossible mission is made harder by the realisation that the Nazis have already turned a whole bunch of former superheroes into the undead, as well as the entire population of Asgard led by a zombified Thor. 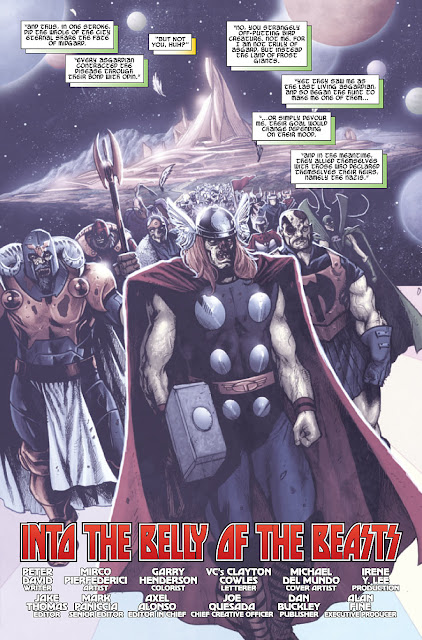 The story was action heavy and full of twists and turns along the way. If things had been played seriously I think Destroy! could have worked out a lot better. There is a bodycount that racks up and up throughout with many of the initial team of twelve meeting their ends in various bloody and gruesome ways. This could have felt daunting and horrific if played right. Unfortunately then the writing is often played for laughs, this felt at odds with the serious situation going on, it couldn't help but bring down the tone when in-between well known (and not so well known) heroes meeting their ends there is corny dialogue and terrible one-liners all over the place. The twelve core members of the team are made up of Howard the Duck, Dum Dum Dugan, Battlestar, Red Raven, Eternal Brain, Gur, Dragoon, Dynaman, Taxi Taylor, Flexo, Blazing Skull and Breeze Barton. Out of all those I had heard of just two before reading this. Some more recognisable ones do appear, including Loki, Bucky and Red Skull.
This brought together the five issues that made up the Destroy! arc. The story barrels along at breakneck speed with barely any break in the action, for me personally due to not being familiar with a lot of the characters it made them far less disposable to my mind. The fast paced plot meant that there wasn't really a lot to it. A few flashback sequences were shown to reveal just how zombie apocalypse had managed to occur, at least one dream sequence, and an obligatory final panel twist cliffhanger. Other than this, just like the zombies themselves it was braindead, no substance at all, no desire on the part of the reader to care whether anyone lived or died.
Marvel Zombies Destroy! didn't really do anything wrong, it was suitably gory when needed and plenty of undead appeared. A decent story was what this really required, or at best, totally drop all the ill suited humour and make this into something far more bleak and thrilling. By this point my expectations for this series are quite low, but I do have some hope that the property will still be able to make a story that hits the heights of earlier examples.
SCORE:

Posted by Daniel Simmonds at 07:50