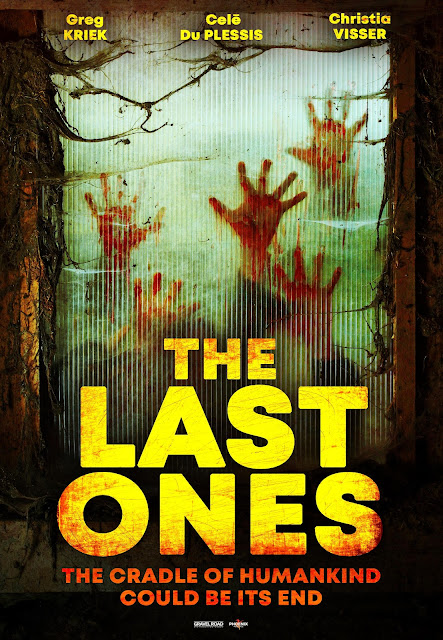 You can tell that writer and director Howard Fyvie was heavily inspired by 28 Days Later when coming up with his South African zombie film Last Ones Out. Everything by the fast moving infected 'zombies' to the up close and shaky camera footage during action scenes, even to the protagonist waking up alone in hospital. The only problem with this one however is the distinct lack of infected and some dumb and annoying characters.

A young American man, Henry (Greg Kriek - Maze Runner: The Death Cure) had been in South Africa to keep his fianceé company while she was working in the country. Due to needing to have his appendix removed he was in a rural hospital, and so when a mysterious new virus sweeps the continent and turns those infected into flesh hungry maniacs he finds himself in a bad situation. After the hospital is overrun, Henry is rescued by Sunet (Christia Visser), a nurse and together they team up with a doctor, Siseko (Tshamano Sebe) and a man named Vincent (Vukile Zuma). Henry manages to get in contact with his fianceé, but she tells him the unfolding disaster has made her contemplate her life choices and that she no longer wants to be with him! However, she does offer him (and him only) a place on the convoy that she has arranged to evacuate herself and her team. With the false promise that all four of them will be able to join the convoy, Henry and the others set out into the wilderness of Africa to get to the rendezvous point.

Things don't start off well and that is mainly the path of the whole film. The first biggest problem is Henry, this character is self centered, bossy and downright rude. Being in a strange country, and seeing the outbreak as nothing to do with him he just wants to leave, happy to trick his companions in his selfish desire to save himself. This is all designed I guess to give him a redemptive arc, and that is what is attempted with the character. I couldn't look past his earlier actions though, and where early in the film he had been trying to assert himself as the leader (even right at the start when he was still drugged up and barely able to move he is barking out orders!), this arc gives him the opportunity to become the leader he so desperately wanted to be. It sucks that he was made the central hero when I would say Sunet is much more of that. She is the one who rescued him, she is the one who carries on with the plan even when everything looks dire, yet she is made to play second fiddle to the arrogant Henry.

The biggest problem with Last Ones Out is the infected, or lack of. Right until the finale there is only ever one or two infected encountered at a time. Actually, up until the end of the second act the group only ever encounter one at a time. Trying to ape the fantastic chase across the open field at the start of 28 Weeks Later loses some of the translation when the heroes outnumber the sole infected person four to one. It made the scenes where infected appear feel repetitive, not helped by the fast editing and rapid swinging around of the up close camera that makes these scenes confusing to follow. I admit that the end of the movie featured a whole bunch of infected, it made for a thrilling finale that made me wish there had been more of this throughout rather than saved for the end. Even this pretty decent sequence is ruined by a character making a really illogical choice for literally no reason whatsoever.
One thing this does have going for it is the location, South Africa is a beautiful country, and there were some great places visited. A highlight was a maze like shanty town made up of small flimsy buildings that the protagonists have to traverse. The continent isn't enough of a reason to watch this as The Dead is a far better zombie film also set in South Africa.

I hoped for more with Last Ones Out, sure it doesn't have a fantastic budget but I wish they could have thrown more extras at this. If it had been the same film but the antagonist count tripled this may have been more enjoyable, but the lack of much threat made the insufferable Henry's journey almost dull, and the derivative nature made the comparisons to much better films hard to ignore. Last Ones Out can be seen on Shudder.