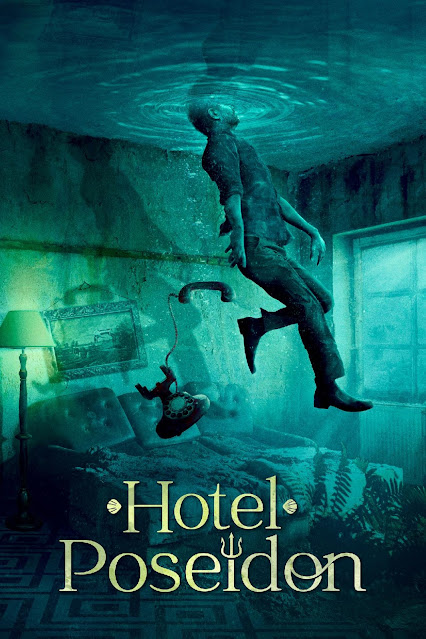 Hotel Poseidon is a Belgian darkly comedic fantasy/horror film that was written and directed by Stefan Lernous in his feature length directorial debut. It is a hard film to describe as it follows a near nonsensical meandering format with the only real constant being the central protagonist, and a story that is nearly non-existent.

Dave (Tom Vermeir) is the owner of a very dilapidated run down hotel that has seen much better days than the trash filled dive it has become. He discovers that his elderly Aunt has died, a problem as it is her pension that was paying for the hotel to remain in a somewhat working order. Meanwhile, two men hoping to hold a bizarre private function plan for the evening. 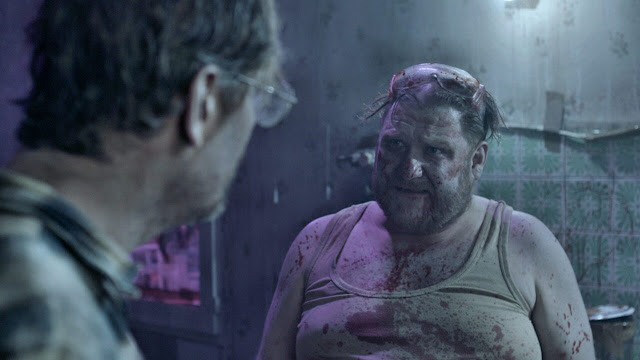 It is quite alright to ignore that synopsis as that is only tangentially what this very strange film is going for. With the whole film taking place within the walls of the hotel, and the random and often nightmarish situations that unfold within I got a real feeling of Mother! though I would add I appreciated this a lot more than that one. This similar feel is no more apparent than during my very favourite scene of the movie, a disorientating ten to fifteen minute section that takes place during the private function. This scene if it had been on its own as a short film would have scored very highly with me. In it, Dave bounces from group to group in the packed room, many characters speaking utter nonsense, and with a hostile atmosphere, such as a man that Dave keeps accidentally bumping into, a prolonged sequence of Dave crawling on the floor, and the finale for this section in which the patrons all turn on Dave. All of this set to the accompiment of some great music being played by a band in the room, and features some great direction, best of which were several long single shot sequences that had the man interacting with a whole host of characters in his dizzying journey around the room.

Nothing quite matches that sequence and Hotel Poseidon couldn't help but feel less exciting once this is left behind. There is no real semblance of order in what occurs here, such as when Dave starts to kiss a woman in the rickety elevator, then wakes up within an enclosed jungle exhibit in which sometime later he has grown a huge beard and fashioned a crude shelter to protect against the tropical storms. All of this of course as several characters passively watch him from without the enclosure. Bizarre things like that are the order of the day here. Dave is almost a blank slate, he doesn't have much to his character as he shuffles zombie like around his ruined hotel. Other characters for the most part have a unified grotesque look to them, they all seem to be covered in corpse paint, with wild makeup designs that their strange exaggerated facial expressions accentuate. This gave me the sense that Dave was in some sort of hellish purgatory, one in which the guests are passing through on the way to Hell. It is never made clear exactly what is going on and there is never any desire on the part of the filmmakers to make sense of anything. This felt very arthouse, including the obligatory edited together sequence of many different shots in short order,  these appear as some sort of nightmare sequence in which Dave is represented as a young boy. 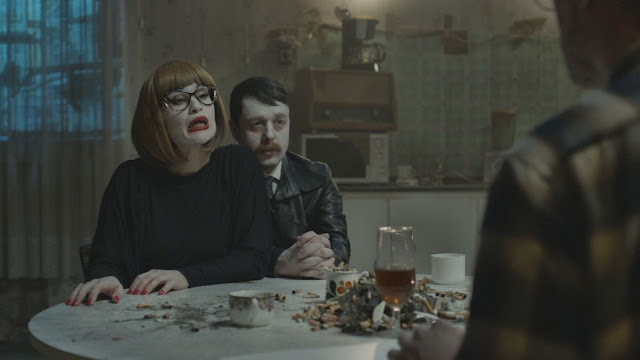 With this type of crazy it isn't frustrating to not get a real grasp of what on Earth the director was going for. Personally, I had no clue, the film ends as it starts, the plot points suggested through the ninety minutes having gone nowhere and without having been resolved. Nonetheless this was an experience, whether it is one that will appeal to you or not is another matter, outside of occasional slow moments   there were some wonderfully trippy parts here at points, while the hotel itself had some fantastic set design. Hotel Poseidon debuts on the Arrow subscription streaming service on January 3, and includes a bunch of extras.

Posted by Daniel Simmonds at 12:10