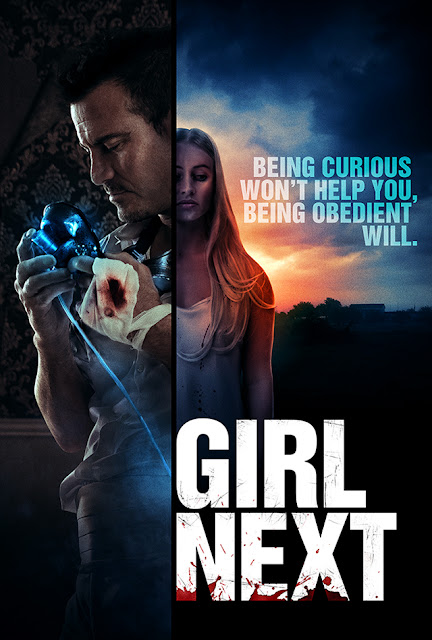 Before I begin this review I will say that I really didn't get what Girl Next was going for, I found it to be mostly an unpleasant experience despite how well made it was put together. This was directed by Larry Wade Carrell (Jacob) with a story written by Zeph E. Daniel (Society) and Michael Muscal and has won a lot of awards.

Lorien (Lacey Cofran) is a young woman who is abducted one day and taken to the mansion of pseudo scientist Heinrich (Marcus Jean Pirae - Bulletproof Monk) and his sadistic wife Misha (Paula Marcenaro Solinger). Heinrich is in the business of creating 'Sofia' dolls; brainwashed victims who become pliant and willing sex objects for his perverted rich clients. Lorien becomes his latest subject, and while on the surface she has lost all self control, on the inside she is on a hallucinatory journey to rediscover just who she is. 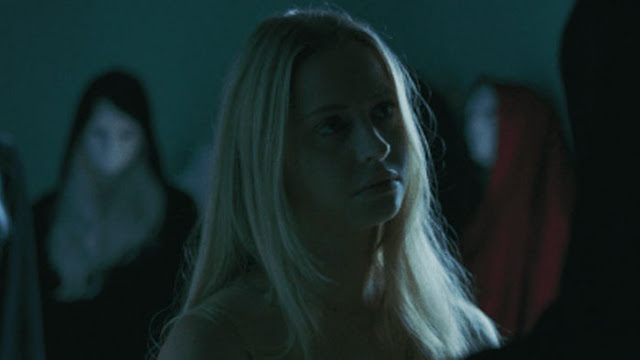 I expected Girl Next to follow the typical format of a revenge thriller. That terrible things would happen to the protagonist, but eventually she would escape in order to turn the tables on her captors. The crib notes I assume would say exactly that, but with the girl brainwashed at the end of the first act a lot of the film then falls onto the shoulders of Pirae and Solinger. Nothing with my criticisms falls onto their acting ability, I had no issues, except maybe the stereotypical portrayal of insanity of the character of Charlotte (Rachel Alig - The Cleaning Lady) and Cofran's character. Both of these were for very obvious reasons, the former had a lot more to her than at first appeared, while Lorien was brainwashed so obviously wasn't going to be full of personality. Elsewhere you had Larry Wade Carrell (Jacob) who played a one-note villain, but gave a fun performance, a despicable character who wouldn't be out of place in a Rob Zombie movie.

The film has one foot in the arthouse genre for much of the run time. Lorien has plenty of dream sequences, including the obligatory one of her being completely naked in a featureless void, which arthouse films always can't refuse to include. Subject matter aside I enjoyed the trippy vibes going on. There is a slight suggestion of a supernatural element, such as apparent tears in reality and a floating hologram of an angry clown head, but these can be attributed to the strange drug that Heinrich is addicted to (very Bane like when he has his face mask on). These all have good special effects, I loved the glowing blue liquid of the drug, and I thought the special effects were usually pretty effective. I certainly winced when a character had a hole drilled into their foot, and when a character had a knife jammed right through the palm of their hand.

For me it was the story I didn't enjoy. The shift to the antagonists as the central focus gave me the feeling that maybe Heinrich was meant to be seen as some sort of antihero that could possibly be rooted for. Then there are the scenes of rape and abuse with any kind of consequence not occuring till much later. Of course, the finale was as thrilling and violent as could be hoped for, but Lorien due to what the character went through, never showed any kind of personality to her and so unfairly it was hard to really care if she lived or died.

Girl Next was a well directed and acted film with some good cinematography (Pau Mirabet) and editing. The look of it was all effective, for me though the story just didn't resonate for me, I felt I just did not get what the intentions of the writers were. Girl Next is due for release on 2nd May via High Fliers Films.