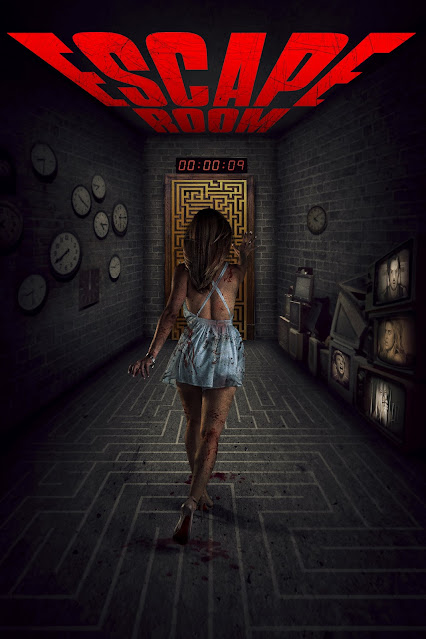 Escape Room (not to be confused with Escape Room that came out in 2017 also, or indeed Escape Room) is a horror film from Will Wernick (Follow Me) that was directed by him and co-written alongside Noah Dorsey. At the time there apparently hadn't been a horror film set in one of these places, but since then there have been at least ten different horrors using the same idea. The film was interesting, though lacking somewhat in the horror stakes.

For Tyler's birthday (Tyler played by Evan Williams), his girlfriend, Christen (Elisabeth Hower) has arranged for him and his friends to take part in an exclusive escape room experience. The couple, along with Tyler's sister Tabby (Kelly Delson - Follow Me) and her boyfriend Conrad (John Lerardi - also Follow Me) as well as Anderson (Dan J. Johnson) and Natasha (Annabelle Stephenson - Home and Away TV show) are taken to a hidden location and blindfolded. Removing their blindfolds they find they have been put in a series of escape rooms that they soon discover are interconnected. Working together the group begin to start the process of solving the clues to escape, but their fun time turns to horror when they discover that there are fatal consequences for any mistakes they make.

The film doesn't start off great, a murky prologue that shows a victim meeting his end, followed by a bizarre audio conversation of someone being tortured for failing to solve riddles, all set to different shots of city streets at night. Following this we are introduced to the characters, all of which appear to be young and rich, and all of which do not seem like good people. Eventually after a lengthy first act the escape rooms make an appearance and the film improves. For a horror film though this really takes a good while to get going. Ignoring the prologue sequence it is an entire hour into the movie before anything bad happens, an hour before the characters even realise they are in any kind of peril. This leaves just half an hour for the horror to unfold. It's a good thing then that the process of the characters solving little clues was interesting to watch. The set design is basic but effective, not remotely reaching the heights of the wonderful set design of the much more popular 2019 horror, but it was fun seeing the puzzles slowly get solved. Special effects are minimal, being rated 15 there isn't too much violence, it is always more implied than shown, except for one or two scenes.

All of the characters here were awful, I think it was a mistake to make none of them likeable. Tabby and Conrad spend most of their screen time kissing each other rather than making any effort to escape, then on the flip side, Anderson and Natasha spend most their screen time bickering. This would maybe then fall to Tyler to be the voice of reason but he weirdly gets more and more paranoid and deranged over the course of the film. It got to the point that I really didn't care if any of them lived or died. Talking of which, the story was kind of bad, nothing is really explained and rather than feel mysterious it instead made me a bit confused when it all suddenly cuts to credits. It felt like there could have been a better effort to neatly tie up the plot. 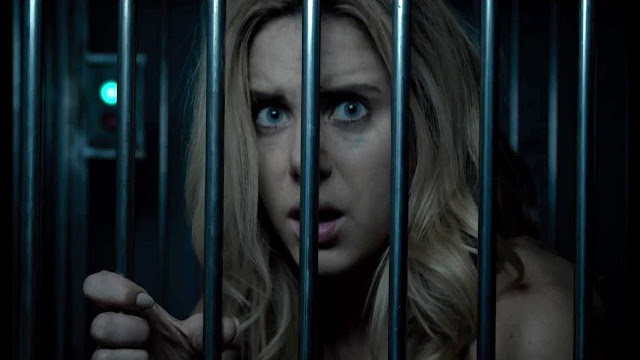 As an escape room this was entertaining to watch, as a horror not so much, it takes far too long for that aspect of the film to begin in earnest, and with the insufferable cast of characters it failed to ever make me care about their plight. Escape Room wasn't fantastic but it had its moments, there are certainly better examples out there now.

Posted by Daniel Simmonds at 11:34