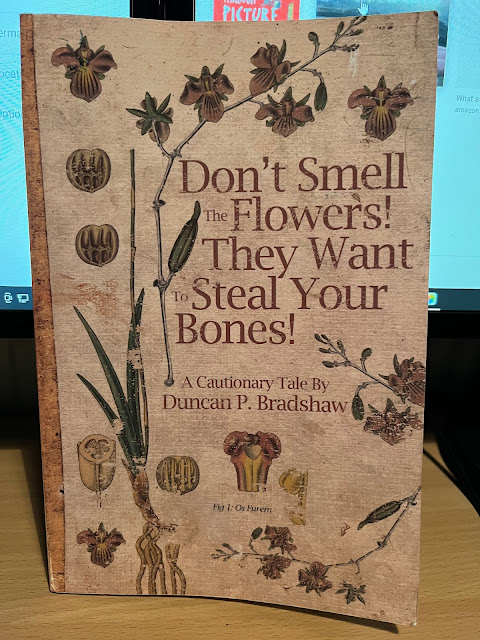 Duncan P. Bradshaw is a comedy horror author whose output gets increasingly weirder and weirder with each subsequent release. I figured he had reached the heights of this stupidity with the fantastic Mr Sucky, but the frequently fourth wall breaking Don't Smell The Flowers! They Want To Steal Your Bones! takes this to an intense new level.

In the village of Charlton something strange is occuring, the residents are being discovered with strange flowers attached to their faces which have rendered them unconcious. In desperation the authorities call in loose cannon Harry, a potentially psychotic and definitely barely dressed detective whose methods may win him no friends, but who always manages to get the job done. He intends to find the person responsible for unleashing these bone stealing flowers and stop him violently. With the help of a possibly magical man named Barnaby, Harry sets out (along with his trusty trebuchet) to save the day the only way he knows how.

It sounds strange to say this as a compliment, but this is exhaustingly full of stupidity, each line is crammed full of jokes, insults, puerile humour and nonsense that it often came difficult to follow the story that was going on. That didn't detract much from the story however as it was bananas, the revelation of just what is going on was as ridiculous as the rest of the plot. The novel becomes something far different than the crime mystery it started off as for much of the second half. This read like Robert Rankin but with added nonsense. A key part of what I loved so much about this was that the characters are aware they are in a book, that their roles are being written by an unseen author. This is another layer of silliness that added so much charm. to quote the book during a random example: "Harry went to roll his sleeves up before remembering that he hadn't had any during the entire story." This fourth wall breaking is constant over the course of the whole novel, even taking time to address criticisms of Bradshaw's previous novel Cannibal Nuns from Outer Space! at one point.

With Harry Surge you have a memorable protagonist, wearing nothing but a pair of speedos for much of the story (using his bottom as a fleshy pocket to store his possessions), his disregard for anyone has him insulting and threatening everyone he comes into contact with, from the world's most unlucky man, Chaz, to the former killbot, now library custodian BU-4T, none are spared from his belief that he is the most important character in the story. The book begins odd and gets even odder over the 162 pages, a third act that gave me Day of the Tentacle vibes, and an epilogue that goes to a genre other than horror. I often say when reviewing Bradshaw's books that I really don't find jokes about bodily functions and other immature things funny typically, but he turns these into an artform, pummeling the reader into submission, much as Chaz does with his surgically enhanced male member at one point in the story. The only real criticism I guess I had was the brief epilogue, it felt too short for the amount of info told to the reader, and it didn't lead up to what I expected, but then perhaps that was the point, seeing as how every other aspect of the traditional detective mystery was upended.

Don't Smell The Flowers! They Want To Steal Your Bones! is exhaustingly silly, but in the best possible way, many authors' writing improves over the years, of course that is the case here, but the quality of pure nonsense is also improving. Bradshaw is a surprisingly versatile writer when it comes to the style of writing, so it will be interesting to see what he comes up with in future novels.