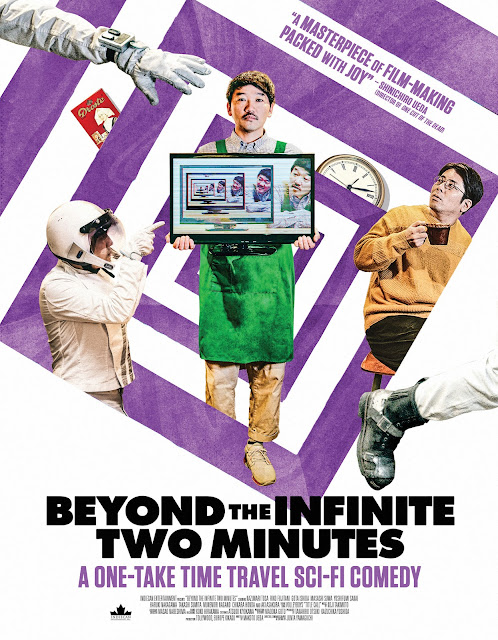 Beyond the Infinite Two Minutes (directed by Junta Yamaguchi in his sole feature film role, with a story written by Makoto Ueda) is the time travel genre's response to zombie film One Cut of the Dead, both of these are Japanese films, both purport to be shot entirely in one single take, and both feature a cast of very earnest and likeable characters. At a glance maybe you could say this shouldn't be featured on a horror site, but I have a fond love for anything involving time travel, and this uses a unique idea in plenty of inventive ways, selling its story despite an obvious low budget.

Cafe owner Kato (Kazunari Tosa) returns to his apartment one evening and is surprised to see himself on his TV. This person tells Kato that he has somehow time travelled into the future and that he needs Kato to come downstairs to the cafe where a second TV is located, in order to inform his past self about this. It eventually becomes apparent that for whatever reason the TV located in Kato's apartment has the ability to see exactly two minutes into the future, while the TV located in the cafe has the ability to see exactly two minutes into the past. By communicating via the downstairs TV, people are able to impart future knowledge to their counterparts in the past. It isn't long before a whole bunch of Kato's friends have gotten involved, all of them fascinated at being able to communicate with themselves. At first content to perform simple tricks to amaze their past selves, soon thoughts turn about how to utilise this wormhole in order to make money, and that's when things begin to make a darker turn. 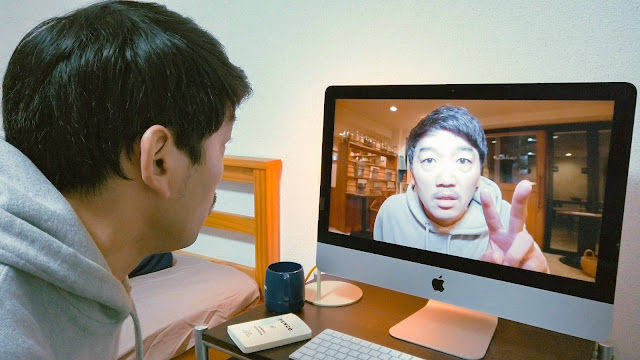 The whole of Beyond was apparently filmed on an iPhone and the whole film has a simulated look to appear as if it was all filmed in a single take. Obviously there would be breaks as filming an entire seventy minute film would be nigh on impossible in a single take, but it is impressive and never becomes obvious when a shot has changed. I found this more impressive than One Cut of the Dead as that changed into something far different later on, but here, this notion of one single take is stuck with all the way to the end. The flow of the story has Kato and friends constantly walking up and down the stairs in order to both speak to their future selves, and then go and act out their future selves talking back to the past. By necessity this caused a lot of repetition, but it was so clever, especially when things don't always turn out as expected. An early example is when future Kato is told by his older self to go and ask out the neighbour he fancies. He had always been too scared of rejection to do this, but is given confidence by his future self, only to do so and get rejected. Not wanting to disrupt the time flow he then pretends to his younger self that he was successful. This becomes one of the more interesting aspects of Beyond with characters being compelled to parrot their interactions out of a feeling of not wanting to cause a time paradox, rather than having an actual desire to do so, bringing up the idea of free will, or a lack of one.

There is a lot of energy with the characters here, with the exception of Kato who is very mistrustful of the ability. It creates an almost manic farcical energy with characters racing around to get in their positions and playing jokes on each other. Such as the one time the characters in the future are all wearing blankets over their heads pretending to be mystics, or when they discover a way to see further into the future than just two minutes and are shocked to see a post apocalyptic landscape, only for it to be revealed to just be a photo placed over the camera. It is a one trick pony, but a trick that is taken to its extremes with lots of different ideas investigated around the limited idea. At around the half way mark things began to get slightly tiring, but the high energy kept me going, while this does get slightly darker the film never loses its light hearted outlook. Beyond the Infinite Two Minutes was an impressive piece of filmmaking and an unique take on the idea of time travel. It might almost get a bit tedious with the frequent back and forth and the repetition, but the fun characters and the slight plot made this an enjoyable journey, one that pays off in the vaguely more serious third act. This releases on a variety of cable and digital platforms, starting today, January 25th.

Posted by Daniel Simmonds at 05:46