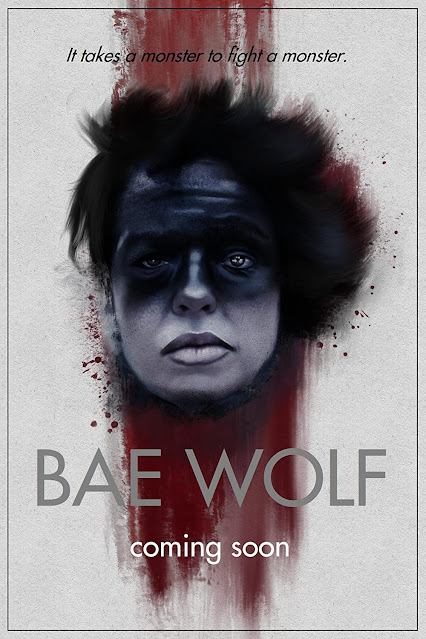 The films of David Axe may be low in budget, but at least with the ones I have seen they are high in ideas. It shows how weird these past few years have gotten in that it feels like much longer than 2019 when I first watched one of his movies, the excellent horror Shed, then it was only later that same year when I saw another of his creations, this time an indie dive into the post apocalypse with the intriguing and political Lection. Now he is back, and with another slight genre shift, as while Bae Wolf has horror elements, it is mainly a fantasy. Axe wrote, directed, shot, edited, mixed and produced the film, as always an impressive accomplishment.
Loosely based on the Old English epic poem Beowolf, Bae Wolf takes place around the year 500 A.D. In the Queendom of Heorot a monster named Grendel (Josh Kern - House Monster) is causing havoc, repeatedly attacking the mead house and killing everyone there. In desperation the Queen's teenage daughter, Freawaru (Morgan Shaley Renew - Bad Girls, House Monster) hires a wandering hero, Beowolf (Jennifer Hill - House Monster, Lection) to slay the monster, but it turns out this hero has secrets of her own.

The press release for this makes much of the fact that this is a queer film, but I would say that is only incidental within the context of the story. There is a gay subplot going on but it is just that, a subplot that doesn't really have anything to do with the main story. Instead this is much more a film about attempting to end cycles of hate, and how appearances can be deceiving. Grendel is portrayed initially as a monster with no redeeming qualities, Beowolf as a fearsome battle experienced warrior, while the town drunk, and Freawaru's best friend Unferth (Aaron Blomberg - Lection, Shed) has secret aspirations of becoming the hero that he believes the town needs. This deceptiveness also applies to the main story itself , I read a synopsis of the original poem so had certain expectations which this then subverts.
A key part of Lection was the devolved society, so reduced that characters could barely converse. With Bae Wolf there is a return to dialogue, and it was occasionally surprisingly deep and meaningful. The writing was a hidden highlight of the film and was when Bae Wolf was at its most fascinating, combined with the soundtrack that had some wonderful synth tracks, led to some special moments. I wasn't surprised to see Matt Akers and Gauge Santiago had also composed the music for Shed as this shared many similarities.
It is hard to get away with how indie this looks and that is something addressed by adding in humour. This humour never got in the way of the more serious story going on, it complimented rather than overtook this. The biggest example for this is the very start when after stating it was the year 500 A.D it then adds an '...ish' to get around the fact that characters are wearing very basic costumes and that they are talking in modern accents using modern lingo. The look of the film may be very simple but the camera work, editing and cinematography excel this above mediocrity. Fight scenes are bloody with many severed limbs and heads flying around, but a comedic element is added to this, often with the action taking place off camera. A key example is the prologue in which Grendel enters the mead hall and slaughters the revellers (behind a closed door), as a drunk Unferth oblivious to what is going on hangs around in the foreground as various victims stumble out of the hall and die. The make-up effects are effective, such as the face paint the characters all wear, and the editing had some fun moments, such as managing to display a dragon on screen by a series of up-close shots of various parts of its body.

Bae Wolf is never able to fully step away from the obvious constraints of what it was able to work with. By leaning into this rather than trying to get the viewer to ignore it however was a good decision. The strength of the writing made some memorable scenes, and it was fun to see so many returning actors from Axe's previous films. Bae Wolf releases on 22nd February from BayView Entertainment.
SCORE:

Posted by Daniel Simmonds at 07:01