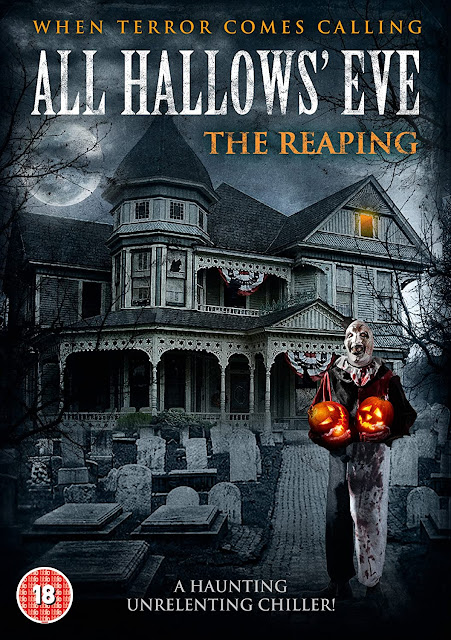 As part of the films I watched for Halloween last year I took a look at the deliciously dark and twisted anthology horror All Hallow's Eve that featured three shorts and a meaty wraparound segment all directed by Damien Leone (Terrifier). I noticed there was a sequel on Prime Video, All Hallow's Eve: The Reaping, and so watched it without really looking into it. I was disappointed that outside of the general idea this was unrelated, it may feature an increased amount of short films over its ninety minute runtime but Leone didn't appear to be involved in this at all, and it began to feel a little bit of quantity over quality.
The wraparound story features a young woman who discovers a VHS tape left outside the door to her apartment. Watching it she finds a series of different horror films. The first anthology had a lengthy wraparound that had its own story going on, this time around there is barely anything, it's like an inferior re-run, except with a man in a subpar looking pumpkin mask rather than the supremely creepy Art the Clown.
Making up most of the film then are the eight different short films, starting with Bryan Norton and Antonio Padovan's Jack Attack. In this, a young boy and his babysitter carve a pumpkin together, but it is when they go to eat the seeds that the horror begins. This featured some great special effects of vines swirling around, and went to a dark place. It was as gory as I expected for a sequel to a very gory anthology. This was maybe The Reaping showing its hand too early though as none of the other short films matched this in terms of gore. 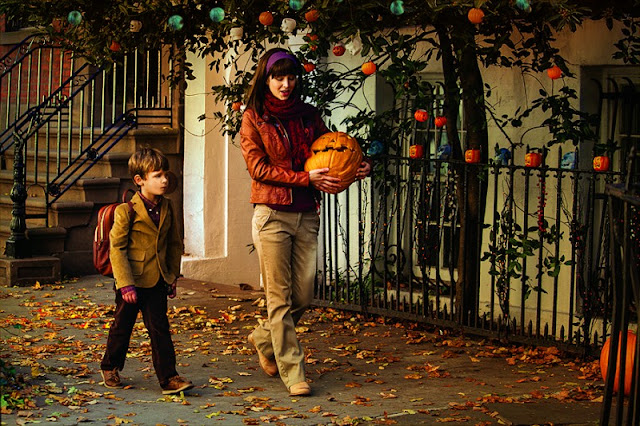 Up next was Marc Roussel's The Last Halloween. This had a cool spin on a traditional Halloween horror by having it take place in a post-apocalyptic world. Four children are still determined to go trick or treating and all is going well until they come across the fortified home of a survivalist who does not seem inclined to give them a treat. I thought this was a clever idea, a cautionary tale that featured a fun guest appearance from Julian Richings (Blood Hunters, The Witch: A New England Folktale), let down only by some dodgy looking CG flames.
This is when the Halloween theme is mostly abandoned with only one other short seeming to take place at that season. The Offering is from Ryan Patch and succeeds by showing absolutely nothing but suggesting everything. In this one, a father and son are on a drive out to a remote location in order to give an offering to...something, before midnight comes. The understatement may typically disappoint but I loved that nothing at all was shown, the horror coming from your own imagination.
Four in and the short films were still going well with Jay Holben's Descent. A young woman visiting a friend discovers her murdered, and the killer still in the apartment, luckily she manages to hide before she is spotted. Some weeks later she is in an elevator at work late at night when she is shocked to see that same killer get in the lift with her, unaware that she knows what he has done. Then to make matters worse the lift then breaks down trapping them both together. This was a tense one that had a lovely twist that I didn't see coming.
Masochist was the shortest film here at under five minutes, another morality tale, this time directed by the Kondelik brothers. Short but sweet this had a group of friends visiting a carnival and deciding to have a go at one of the attractions, the highlight was Bill Oberst Jr. (DIS, Resolution) on fine form. 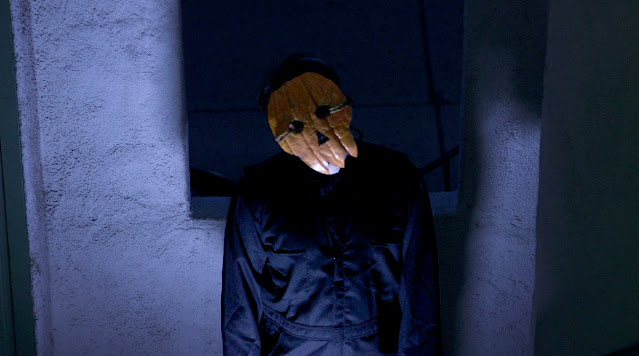 A Boy's Life written and directed by Elias Benavidez followed. I'm not sure if it was the longest film here but it sure felt like it. A boy is scared of the monster that appear in his bedroom at night, his mum tries her best to convince him monsters aren't real, all until the inevitable conclusion. For me this felt much longer than it needed to be, and an underwhelming and predictable finish.
Penultimate short is Mr. Tricker's Treat directed and co-written by Mike Kochansky. Apparently this was a slightly different version to the short out there on its own. In this we see why a man has the best Halloween decorations in his yard, wasn't bad.
Finally is Andés Borghi's Alexia Thomas. This was ruined by the exclusion of subtitles as this was in Spanish (I think) and much of the story was told via a Facebook style chat window whose text I could not read. A micro version of Unfriended this could have been decent if I had been able to understand the story being told.
With the exception of a few of the later ones most the films in this anthology were not bad, for me I was a bit disappointed to discover this had nothing to do with Leone, while the wraparound segment was almost pointless. The rough D.I.Y of the first anthologies shorts made sense being on a creepy VHS tape, these far better quality, and far less bloody shorts didn't feel as good a fit for that concept. Still, I do enjoy anthologies so I didn't think this was a waste of my time. All Hallow's Eve: The Reaping can currently be viewed on Prime Video.
SCORE: