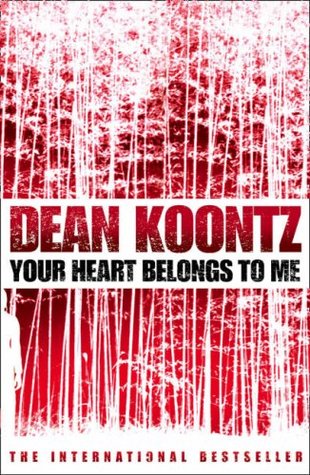 Back in June of this year I had just finished reading Dean Koontz' 1980 novel The Voice of the Night. I didn't think it was that amazing and wondered with some fear that the rest of the books of his I had, but which had never gotten around to reading, would turn out to also not be great. Thankfully then, I've just finished reading his 2008 novel Your Heart Belongs to Me and can report I thought it was a real page turner.
Ryan Perry has everything, an extremely wealthy internet entrepreneur with a beautiful girlfriend, his life seems perfect. That is until he learns he has developed a problem with his heart, and that unless he gets a replacement within a year he will likely die. A year later and a miracle has happened, with Ryan having received a heart transplant, things look like they can only get better going forward. But then he begins to be stalked by a malignant presence, someone who seems determined to ruin his life, and in particular really desires his new heart...
To begin with I didn't like the novel, the first few chapters having to deal with a person whose life was so wonderful and magical that it didn't feel remotely realistic. With soft hammer blows this life is deconstructed in such a way that I couldn't but help come to like the character of Ryan, especially when events happen that all can relate to. The book is split into three parts, the first being roughly the first half of the entire novel. What was strange about this was that the synopsis for the story only mentioned things post-Ryan getting a heart transplant, yet this all takes place before this. It almost serves as one gigantic red herring, Ryan increasingly getting paranoid that the cause of his illness is something that has been inflicted upon himself by others, and his search for this. I haven't read too many books of Koontz' but typically he deals with more realistic human enemies, on occasion he has had aliens or A.I but nothing I had read ever had supernatural elements. Here there is that suggestion, yet it is so swirled together with other ideas that it never seemed odd. The mystery of what is happening to Ryan, and the promise of malice to come kept me hooked and my mind contemplating endless reasons.
The length of part one did lead to some complications with my enjoyment of the rest, especially considering that part two is where a lot of the horror comes into play, yet being made up of 80 or so pages this all felt a bit rushed. From Ryan discovering someone has found a way to effortlessly bypass his home's security systems things very swiftly speed-up to the point where he is being physically attacked. It did feel like this should have had more time to really ramp up the events. The same can almost be said of part three, in which the story is obviously resolved, this time around 90 pages. It goes to a place that was unexpected in tone, and it perfectly made sense, especially with the revelations that follow the clues being solved, but I had hoped for something more dramatic.
There is a quote on the back of the book I have from the Independent on Sunday in which it states the book was "a read-in-one-go novel". Usually I wouldn't agree with such broad statements but I confess that is almost what happened with me. I only read on my lunch breaks in my day job, and when I do I balance my reading between magazines, physical books and ebooks. Yet the day after I started reading Your Heart Belongs to Me I found I was so invested in the story that this become my sole book. I did feel guilt at times with how easily written this was, it felt like I was reading the popcorn version of horror books, easy to read and with not too much depth into its story. I was a sucker for the simplicity of the writing, but it did make me stop and think at times, especially with something one character says "No, it's true. Human beings are such knotted desperate pieces of work - it's a rare thing to know one completely, to the core, and still love him, or her.", that really resonated with me.
Disposable, appeal to the masses fiction, or something with a deeper meaning to tell; either way, the speed with which I read Your Heart Belongs to Me was testament to how involved with it all I was. Sure it almost misses the landing, but by that point I was into this enough to have came away happy with what I had read, and with new hope that there may be plenty more gems in Koontz' back catalogue.
SCORE: