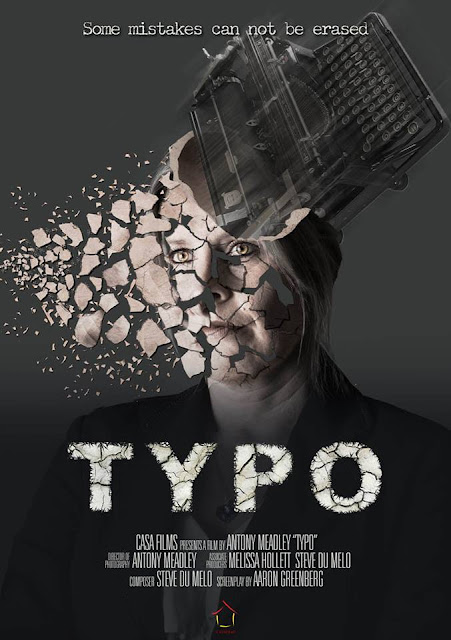 Typo is a drama that was directed by Antony Meadley (Witch Hunt). I actually knew the synopsis going in as I have previously mentioned this in a news post back in October. The core topic Typo is made up of deals with domestic abuse, there isn't any fictional portrayal of horror, I wouldn't even call this a thriller, more a straight up drama. It can be said though that real life domestic abuse is an awful thing, a real world horror and so with that slim escape clause this gets featured on my blog.

In present day, Abbie (Melissa Hollett - As A Prelude to Fear) talks to her apparently comatose husband, Tim (Guy Barnes - Rock Band Vs Vampires) who lays silently in bed. Her one sided conversation leads to her reminiscing about the past, first about the early days when the couple first met, and then the gradual decline in their relationship to the point where Tim is regularly beating her. 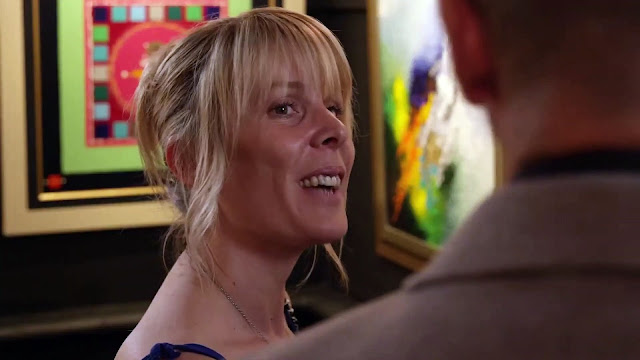 If I had a Woody style pull string on my back one of the quotes I would say is that I love films that begin in the present day and then head back in time to show how events came to be. Such is the case with Typo, the core dangling thread is just how Abbie came to be the one in control, and just what has happened to the off camera Tim. Things start off well enough with scenes featuring when the two first met, the early happy memories they have. It is about the second act onwards when things take a nosedive.

Abbie and Tim are the main characters here, protagonist and antagonist, with the film firmly focussed on Abbie, it is her after all whose memories we are witnessing. For her character this works well, we see her hopes and dreams quashed, and the powerlessness she feels trapped in such a dangerous relationship. It is easy to get on her side and want her to come out on top. Much like Kevin in We Need to Talk About Kevin, the only view of Tim we see is from her perspective, which makes him come across as a one dimensional villain. The man is obviously a nasty piece of work, but his decline into evil ways felt a bit abrupt. There didn't seem to be any reason at all for why the man is like he is. It is suggested that maybe his domineering mother is to blame for him, maybe he's an alcoholic, but there is no real insight to be gained. Instead of a nuanced character you have someone who felt very one dimensional, from the mean way he constantly talks, to his awful actions, he was good to hate, mainly thanks to Barnes' performance, but didn't make for a compelling bad guy.

Despite being a drama piece there are moments that feel outside the norm. Blood is used minimally but effectively, aside from one quite violent scene. There are some unpleasant scenes, including a rape, but this all goes towards explaining what was the apparent tipping point. There could have maybe been some more side characters, Tim's best friend gets the most screen time out of these, the rest of the small cast to my knowledge all only get one scene each. It would have been good to get more of an outsider's perspective on what was going on. There was a satisfying mid-credit sequence but I felt it diminished the power of the actual ending that went somewhere unexpected for me.

As a depiction of domestic abuse Typo works fine enough. With mainly just the two characters the film can feel a little slow, while the character of Tim may have worked better if he had been given the opportunity to seem like more than just a pantomime villain. Regardless, this was something different to the usual types of horror I watch, and effective in imparting its message. Typo can be found on Amazon in the UK here and in US here.