I have often threatened to do so in the past, but it really does make sense to put up reviews of each segment of The Walking Dead, seeing as how the seasons are often split into parts. With season 11 being the final one I've finally gotten in a place to be able to do that. There is an increased episode count of twenty four, this time around the season is split into three segments. The first eight episodes have been and gone, with the remaining coming in 2022. Obviously spoilers for previous seasons to follow.

There are basically three different storylines going on in this first chapter of season 11, some of which were far more interesting than others. With Alexandra running out of food hard decisions have to be made. With that in mind, Maggie (Lauren Cohan) proposes a suicide mission, to return to her settlement that had been obliterated by a deadly group of soldiers known as the Reapers and retrieve hidden food stores. The people joining her on her mission include Negan (Jeffrey Dean Morgan), Daryl (Norman Reedus), Gabriel (Seth Gilliam) as well as a bunch of others. Elsewhere, Eugene (Josh McDermitt), Yumiko (Eleanor Matsuura), Princess (Paola Lázaro) and Ezekiel (Khary Payton) finding themselves captives of the Commonwealth since the bonus episodes of season 10 and interrogated as to their motivations. Back at Alexandra the rest of the cast, including Carol (Melissa McBride), Judith (Cailey Fleming) and Aaron (Ross Marquand) desperately search closer to home for any sort of provisions. 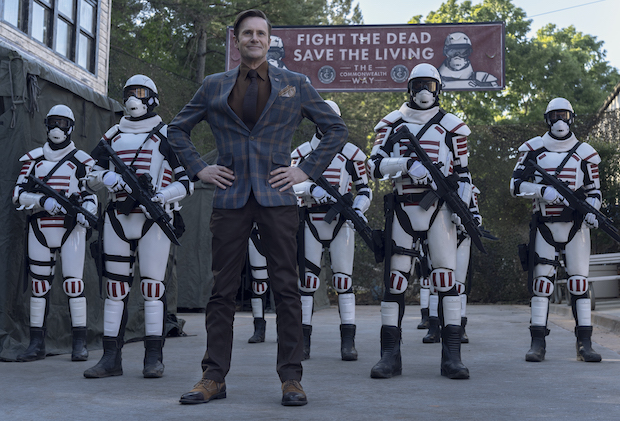 Out of the three storylines going on it was Maggie's mission that was the most action packed. With a neat callback to season 4's Terminus storyline, her team soon find themselves separated after an attack by the Reapers (Hunted), the rest of part one of the season sees the separated characters all having their own little mini adventures as they work to meet back up with one another. Most interesting of these adventures is Daryl, ever reliable to fit in with the bad guys he soon manages to join them as their newest member! His perspective from the inside makes some great moments as he is forced to do some nasty things to prove his loyalty. It is with him that we get a good look at latest antagonist, the psychotic and intense Pope (Ritchie Coster). The character himself is fantastic, he steals every scene he is in coming across as a real threat. The problem with him is that he is used in a similar way that season villains were back in Buffy the Vampire Slayer. The actor is brilliant, it's just he never gets to do anything, episode after episode he is just hanging around the Reaper's headquarters acting mean but not really doing much, it's a shame as such a powerful presence just felt wasted. Better was the Reapers backstory, with the reveal that they are all former soldiers who banded together once the world fell apart.

The Commonwealth meanwhile is the complete opposite, the four here may have found themselves prisoners, but the group they are being held by are civilised in appearance, the most pre-apocalyptic feeling group yet encountered in The Walking Dead. While it took awhile for this storyline to get moving. I had imagined that the Commonwealth was where the story for the all the protagonists was going to end, but as is always the case things don't appear to be quite as rosy as outward appearances suggest, I'm intrigued to see if this large group turn out to be the show's final antagonists for the Alexandrians.
The events back at home are patchy in style, worst of which had Carol out looking for missing horses, it felt dull compared to the action going on elsewhere. Saying that though, one of my favourite episodes of season 11 so far was On the Inside. This was a first for the show in that it was pure horror. In the dead of night Connie and Virgil take refuge from hordes of undead within an old mansion. They soon learn that there are things within their refuge far more terrifying that zombies. Everything about this was fantastic, so obviously inspired by horror films such as The People Under the Stairs and even The Hills Have Eyes. The Walking Dead may be set in a world of undead but it is rarely ever proper horror, far more on the side of action, so to have an episode such as this was a real treat. 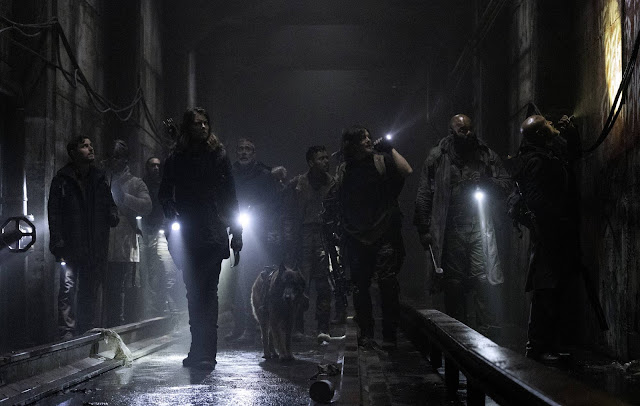 I enjoyed most of what came in part one. The conflict between Maggie and Negan was always fascinating to see, some of the conversations they have with each other were very well written, Morgan is as amazing as ever of making this antihero captivating. Final episode For Blood ends on three separate cliffhangers, only one of which I think really worked. Putting the core cast in apparent mortal peril doesn't put much fear in me, plot armour by this point has made them bullet proof in my eyes. The same can't be said for Maggie's new group, they might as well be called the Redshirts as whenever a character meets their end it is inevitably one of these newly introduced characters who barely have a chance to announce their name and their unique selling point before getting killed off. It is always a shame when the show follows such predictable paths, hoping with it being near the proper end that core characters will finally, after many seasons, find themselves in real and genuine danger.