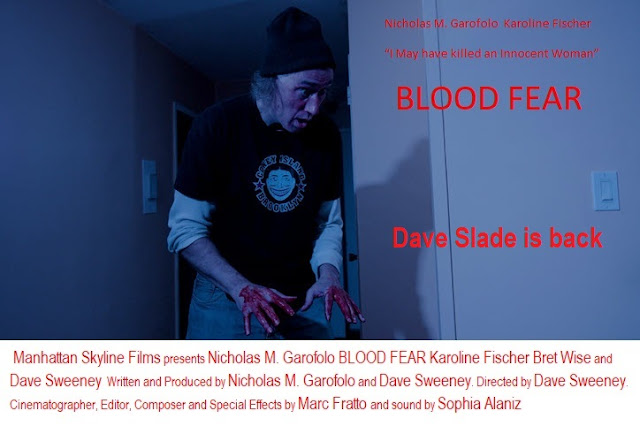 Let's throw some news together from my pot and see what gets cooked up. It is nearing Christmas, on the home front I am planning to get some festive horrors lined up to watch in the run-up to that day.

The bizarre sci-fi drama Twenty Twenty won Best Psychedelic Fantasy Short Film at the Retro Garde Film Festival and has been screened at the Buenos Aires International Film Festival and the Afterlife Film Festival. It has been picked up by Lloyd Kaufman's Troma. The film was directed, written, produced by Dave Sweeney with cinematography, editing and music by Marc Fratto and stars Nicholas M. Garofolo (Deranged Foxhole) as Dave Slade.
A follow up to the film titled Blood Fear has recently finished post production and was filmed in Coney Island, Brooklyn. A trailer for that can be viewed here.

Alaska's premiere dark punk/death rock duo, Cliff and Ivy released a new EP titled Bring Us the Night back in August. The four track EP is available on limited edition 7" vinyl and digital formats, the tracks are Bring Us The Night, Chasing Blood, Dominion and Parasite.

Finally for this micro-news, back in July, Pennsyvania-based industrial band Malice Machine released their new full-length album titled Chemical Violence. The band say of the album "...started as a continuation of our first album, Digital Scars, but quickly evolved into a more electronic driven, rhythmic industrial project with guitar being a lesser element. There are several dance heavy tracks but we also return to brooding flavors to satisfy our darker nature."
Posted by Daniel Simmonds at 13:57

Very interesting and creative. I like alot. Reminds me of the old school like Nine inch nails, Rob Zombie. Artists like those....ICONIC!!!!
Send more like this over, No more of this with this generation!!!!