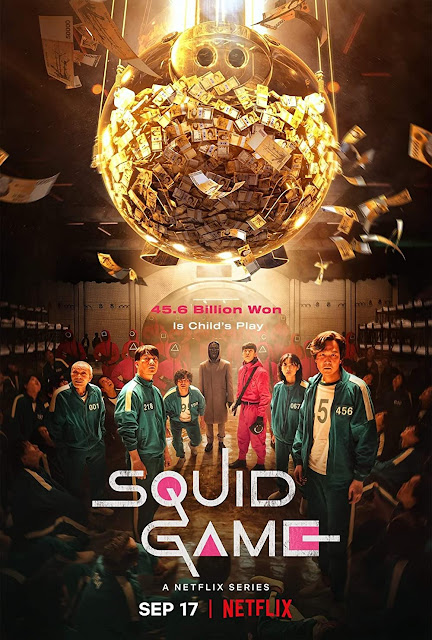 You would have to have been living under a rock to not of heard of Netflix's astonishingly successful Squid Game. This South Korean show was created by Hwang Dong-hyuk and was based on an idea he originally had ten years previously. The show came out towards the start of 2021 so it may seem like it has taken me awhile to get through it, and it has indeed taken me a good few months to watch the whole thing. That wasn't down to lack of interest on my part, more that I was so invested in the characters here that I often found it a traumatic and anxiety inducing experience as I wanted all my favourites to survive, when it seemed very much like there would only be one survivor.

Seong Gi-hun (Lee Jung-jae) is a waster of a man. He has no job, still lives with his mother, owes vast amounts of money to both the bank and a loan shark, and has let down his ten year old daughter so much that she takes it as a given that he will continue to do so. One day a smartly dressed man approaches him with an offer, play a children's game with him and should he win he will be given some money. Eventually Gi-hun succeeds and is rewarded with both the money and a mysterious business card with a phone number on the back. Calling the number he is asked if he wants to participate in a special tournament in which the winners will gain vast sums of cash, to which Gi-hun readily agrees. He is taken to a large facility on a remote island where he finds himself one of 456 desperate contestants. Things start off fun but that turns to horror when the contestants realise that if they fail whichever game they happen to be playing they will be murdered. The survivors of the game are then given the choice to either continue the deadly games or return back to their lives, back in the real world however they realise how badly this money is needed and so return, complete in the knowledge that if they fail death will await them. 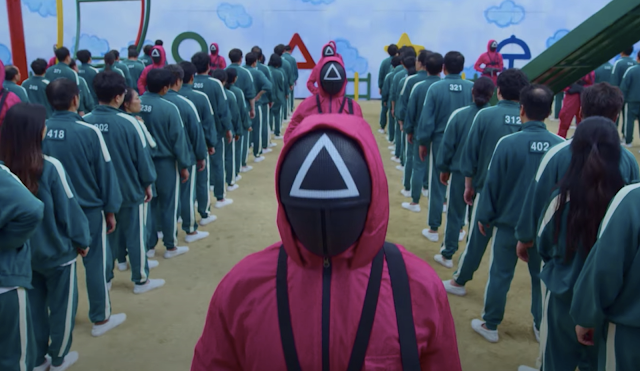 Squid Game takes place over nine episodes, each of which is roughly an hour long. With six different games taken place it makes sense that not each episode would contain a game, though these are very much the centrepiece of the series as a whole. I admit to being a bit impatient for the game to begin, due to this I found myself wishing things would speed up in first episode Red Light, Green Light. This introduction was needed though as it really displays protagonists Gi-hun life in an important way. He doesn't get given the best first impression, I thought he was a real idiot. Over the course of the show though it really comes out how much of a good person he actually is. He may have many faults, but he is a genuinely nice guy who goes out of his way to be kind to those around him. The episode really improves with the introduction of the first game, this made me eager to see the rest. While some of the games were not as exciting as others (notably the second game was the dullest of the lot), in general they were fantastic. I loved the cliffhanger finale of Stick to the Team, while the drama going on during the heart wrenching Gganbu changed what could have been boring to something that was powerful.
The plot managed to have plenty of unexpected twists, some of which worked better than others, the biggest twist was something that did surprise me. Squid Game is a self contained story, but it leaves enough dangling plot threads for the announced second season to capitalise on.

Bringing so much to the show as a whole were the amazing set design, the sets are brilliant, from start to finish this all looked so impressive, Squid Game wouldn't have been half the show it was without this strong visual style. In contrast to the violence occurring within them, the sets are bright and colourful, matching the childhood aesthetic of the simple games. This also implies to the costume design, the masked guards all kitted out in iconic pinky-red jumpsuits, the contestants in their green tracksuits, all wonderfully designed. Also working in contrast to the innocent yet creepy location is the amount of horror taking place. People are constantly getting killed, whether by gun fire, falling to their deaths, or more up close and personal means, the violence is often shown directly on screen with lots and lots of blood. The special effects never failed to impress throughout. 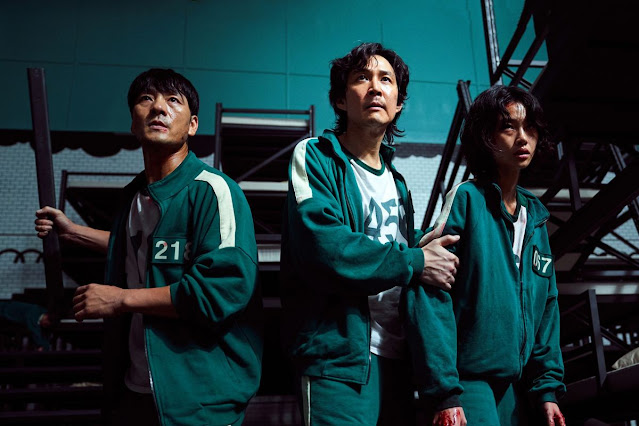 Eventually out of all the contestants, protagonist Gi-hun assembles a little 'losers' group together, all of which make up the rest of the central protagonists. These characters all have key scenes to themselves during second episode, Hell, where we see their unique situations. The characters are a varied bunch and were all interesting in their own ways. You have the elderly and possibly dementia suffering Oh Il-nam (Oh Yeong-su), the immigrant Ali (Anupam Tripathi), a young small time thief Kang Sae-byeok (Jung Hoyeon) and Gi-hun's childhood friend Cho Sang-woo (Park Hae-soo). With the exception of Sang-woo (who revealed himself to not be as innocent as at first appears during third episode The Man with the Umbrella), I really cared about these people. With such a large cast the majority of the other contestants were faceless, but some key side characters included a violent gangster and the crazy acting wildcard Han Mi-nyeo (Kim Joo-Ryung), both had memorable scenes.
Then there is a alternate story going on behind the scenes. Apparently added late in the development of the show is a subplot about a detective, Hwang Jun-ho (Wi Ha-Joon) who has snuck onto the island disguised as one of the faceless guards, his investigations shed a lot of light on just what is going on. I loved these behind the scenes elements, it's where a lot of the mystery comes from, and provided a nice breather from the fates of the characters I cared about.

I could talk about this all day and still not be done so I will put a full stop on it here. I loved Squid Game, it was expertly made, had a compelling story, wonderful direction and cinematography, as well as amazing set and costume design. Some of the more tertiary characters may have felt a bit stereotypical but the main ones were all strong, testament to that fact is how much I came to love them all, and how much of an ordeal it was for me to watch this (in the best possible way). Squid Game is on Netflix and should be watched as it really does not disappoint.