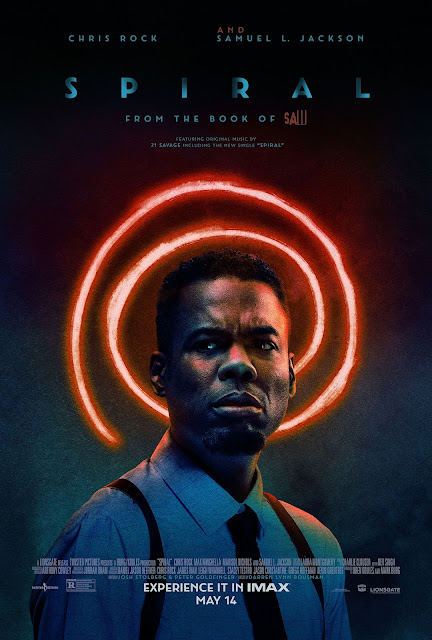 I was bored last night (at the time of writing this), a rare occurrence, but in this state I was browsing Amazon Prime Video and saw that Spiral: From the Book of Saw was on there to watch. I like the Saw series, I wouldn't say I'm the biggest fan as I've only seen just over half of all the entries, but I've never actively disliked any of them. Spiral is a canonical reboot of the series, but having suffered through this I really hope this isn't the direction any future entries will take.

When corrupt police officers from his precinct start showing up dead, Detective Zeke Banks (Chris Rock - Madagascar) gets caught up in the deadly games of a new Jigsaw copycat killer. This killer's ire is solely directed at bent cops and they have chosen Banks as the man to communicate with, due to his public exposing of corruption in his force some years back. Teaming up with his new rookie partner William Schenk (Max Minghella), the two set out to try and catch this new threat, a job made harder due to the officers they work with all bearing their own personal grudges against Banks. Spiral has perhaps the most glaring miscasting I have seen in a film for some time. Rock is atrocious as the protagonist. It's not that he is more known for comedy that was off putting, more that a good 95% of his lines he shouts. It made the character seem larger than life in all the worst ways, it was hard to take him seriously. It doesn't help that perhaps wanting to keep pace with him a good proportion of the other actors also shout their lines constantly. The way the camera follows Rock around, and his attention stealing delivery of his lines made it feel like this character was the most important person in the world of Spiral. I guess in terms of the story he was, but everything revolved around him. Then you have Samuel L. Jackson playing the role of his father. Of course that actor is legendary, but here because of the recognition I had for him he stood out like a sore thumb. He felt like he wasn't playing a character, more that he was playing a stereotypical version of himself, constantly 'motherf*cking' all over the place.

That maybe leads on to a less fair criticism, that of the change in style. Core Saw films intensely focus on the victims of the games that Jigsaw made them play. With this new direction it is the police force who are the focus, the games relegated to short moments, and frenzied flashback sequences. Apparently the kills had to be edited to get a decent rating so it isn't all Spiral's fault. What we do get are fun enough, they look deliciously violent,  and are relevant for the crimes the victims are said to have done. A character accused of lying in court for instance finds himself trapped in a device with the only way to escape being to rip their tongue off, a character accused of covering up corruption gets trapped in a device that will drip boiling hot wax over their eyes. I wouldn't have minded the police focus if the cast had been better, but with seemingly everyone except for the irritating Banks corrupt there was no-one here to root for. The less said about the copycat killer the better, needless to say the reveal was both unsurprising and unexciting, leading into a finale that bordered on farcical. This was directed by Darren Lynn Bousman (Saw IV, Saw III, Saw II), out of his previous entries I have only seen Saw II but I hope they were better directed than here. The worst parts were the kinetic editing of multiple shots put together to indicate insanity. Sure it was cliche but I understand their inclusion during the torture scenes, it was when they are used for Banks that things began to look pretty silly, a close up of his gurning face as multiple different angles are used. 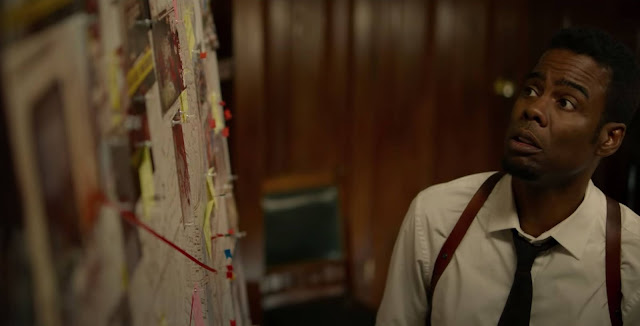 I had heard that Spiral: From the Book of Saw wasn't great, but I had heard that about plenty of films in the Saw series and so figured I would still enjoy this. I didn't, exposing crooked cops may be sadly more relevant than ever today but due to some terrible casting choices that I couldn't take seriously and some silly plot decisions this was one movie I sure was glad see reach its credits.

Yep. I too discovered it on prime and have just posted my review. Your review made me laugh at Sam J mother @ all over the place. I gave it an average rating, for me the only thing that saved it was the cinematography! Great review btw

Thanks! Glad I'm not the only one who didn't think it was amazing.