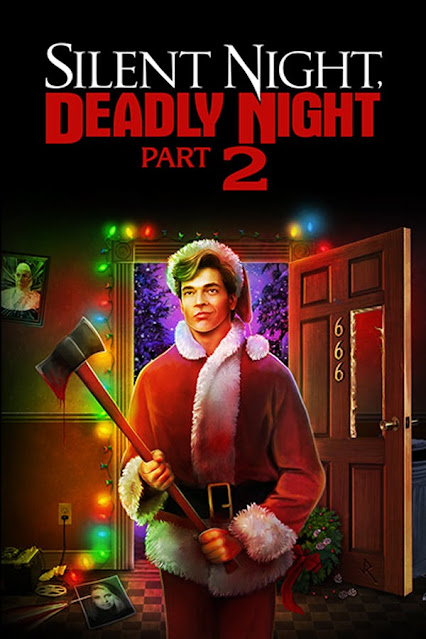 Having enjoyed watching Silent Night, Deadly Night on Shudder the other day I was pleased to see that the first sequel, Silent Night, Deadly Night Part 2 was also on there. This film was directed in part by Lee Harry, I say in part for this sequel is half made up of reused footage from the first film, it is only in the second half when anything truly new makes an appearance.
The film mainly takes place as a series of flashbacks in which psychiatric patient Ricky (Eric Freeman) talks to psychiatrist Dr. Henry Bloom (James Newman - The X Files 'Two Fathers') about his past. Being the brother of Billy (the killer from the first movie) much of this is him re-telling the story of the night his brother went on a rampage. It is around forty minutes into the movie when Ricky begins to talk about the things he has done, in particular his very own rampage that resulted in him getting locked up. 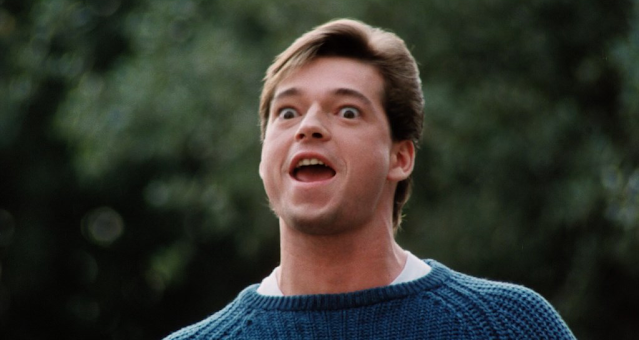 I actually knew beforehand that a lot of footage from the first film was used and so this didn't come as an unwelcome shock. Mainly it is a truncated version of the story, all the kills are there (albeit edited in many parts to reduce the on screen violence), but none of the parts that didn't implicitly involve Billy. Not that it really makes that much sense seeing as the character of Ricky spent that whole film in the orphanage so didn't actually witness the vast majority of that particular story. Much like the format of what came before this jumps around in time, after the summing up of Silent Night, Deadly Night we then see Ricky as he gets adopted by a couple as a child, and the key events in his life that shaped him into the psychotic killer he became. What was interesting to me was the different type of crazy he was. Billy seemed to really believe he was Santa and that what he was doing was the right thing. Ricky isn't as deluded, he appears to be triggered by the colour red, and he does punish people he sees as being 'naughty', but he is more typically insane.
At times it felt like Part 2 was trying to be a comedy, none more so than when Ricky is in killing mode, Freeman completely overacts this role, his constant laughing really needs to be heard to be believed, while his quote "Garbage day!" quite rightly later became an internet meme. The first flashback to the original movie and the third act both take place around Christmas, the rest of the flashbacks do not, we follow Ricky at various points in his life but none of which are festive related. It seems that Freeman must have had fun in the role, but his exaggerated performance makes him hard to take that seriously. The pacing problems that came before don't exist this time around, the keystone of Ricky in present day talking about his past means we neatly get taken from scene to scene without all the downtime that had came last time around. There is a high body count, but of the new kills they were not as inventive as what came before, though there are fun moments, such as a victim whose eyes pop when they are electrocuted and a man impaled with an umbrella which then opens up when it comes out the other side of him! 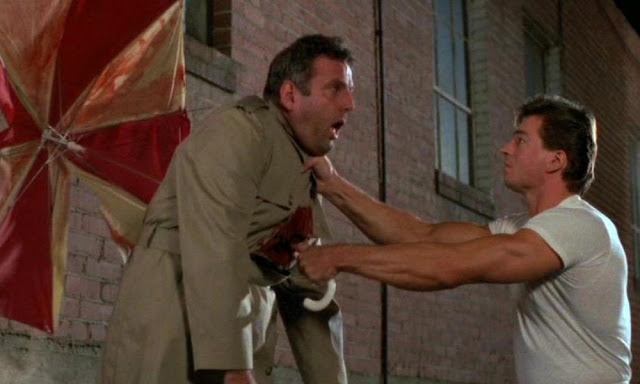 Silent Night, Deadly Night Part 2 isn't a good film, but I would be lying if I said I hadn't enjoyed watching this, even when half the film is recycled footage. Despite not being as good as the first I think I did actually like this more, its dumb and full of awful acting but it sure was entertaining. Silent Night, Deadly Night Part 2 is currently streaming on Shudder.
SCORE: