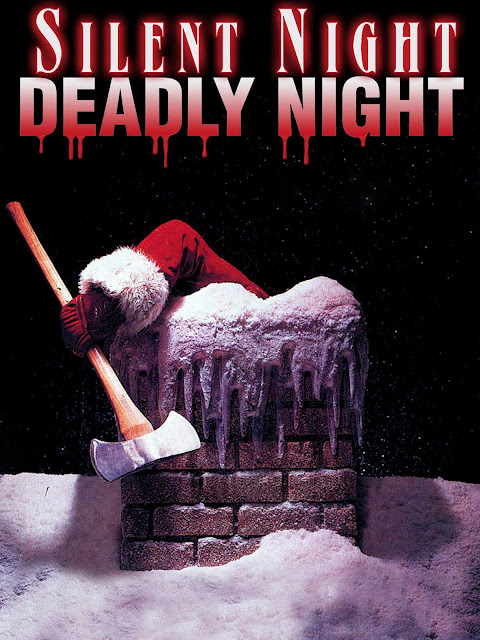 I've discovered in the past year that I have a real soft spot for eighties slashers, that really was a golden age for the genre, full of trashy films with fun kills and plenty of blood. Christmas horror films have a genre all to themselves brilliantly, it is a great time of year to set a horror, the juxtaposition of all things happy and light alongside darkness and insanity. Silent Night, Deadly Night came from director Charles E. Sellier Jr in his feature length directorial debut. It features a great killer, but the pacing means there is too much down time in the middle.
As a child, Billy witnessed his parents getting murdered by a criminal dressed up as Santa Claus. Understandably this led to him having a lifelong fear of the fictional man, who he believes has the right to severely punish those who haven't been good. With the help of a nun from the orphanage where he grew up, Billy (Robert Brian Wilson) now eighteen, gets a job at a local toy store. All is going well until Christmas comes around, Billy gets triggered by all the festive decorations, things are made worse when the store owner, Mr. Sims (Britt Leach - Weird Science) gets the boy to dress up as Santa for visitors to the store. His final bit of sanity is lost when during a Christmas Eve after party at the store he witnesses a colleague in the midst of getting raped. This begins a night of terror as Billy rampages around the small town, convinced he is Santa, and determined to punish everyone he judges as having been naughty. 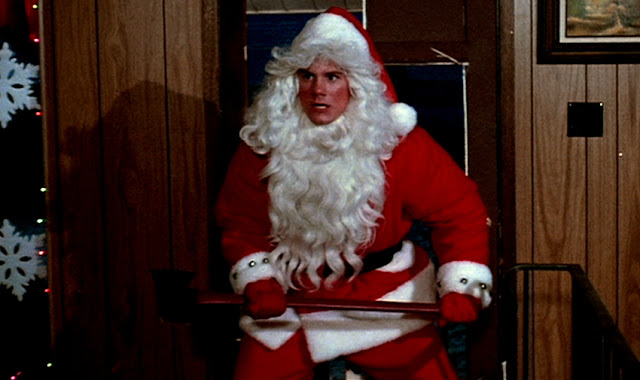 Parts of this felt like a Christmas themed Halloween, both Michael Myers and Billy had a childhood event that changed their life, both brought up in institutions, both obviously killing during a yearly event, and both even have someone who knows them better than anyone else trying to track them down, in this case the only nun at the orphanage that showed Billy any kindness. Where this is different is that we get to see plenty of the troubled teen before he snaps. The film opens with him as a child witnessing his parents murder, before leaping forward a few years to show his experiences as an orphan. Then we get a jolly little segment that includes a montage of him working at the toy store. Anyone could have seen that that was not the best place to put a boy with severe psychological troubles associated with Christmas! Due to all this the killer's identity is always known, but to all the many children he meets along the way they firmly believe him to be Father Christmas and so constantly go out their way to help him and interact with him.
There are plenty of kills which vary between looking tame, such as strangulations, and being inventively messy, such as when he impales a woman on a mounted deer's antlers, or when he flings a character through a window, a later neat shot showing the victim with huge shards of glass imbedded in them. Then there is a memorable moment where he punishes a thief who had stolen a teens sleigh. These kills all looked fun, of course practical effects used, and a bit of blood to sell the violence, but not too much. The middle of the film is where things fall apart a little bit. There was a great section taking place at the after work party, but then after this things begin to feel fragmented with Billy randomly turning up at different spots around town. Even worse is then the switch to the following day. It is always novel to have horror set during daylight hours, yet this down time that makes up a sizeable chunk of the third act causes the film to lose momentum. It pulls it together for an enjoyable finale, but the lead up to that was a little bit dull. 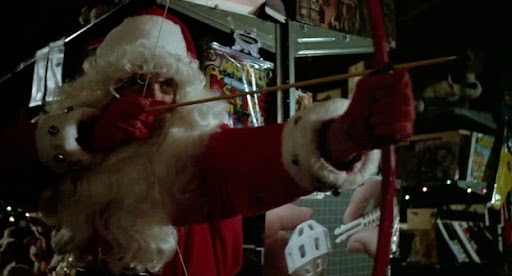 Silent Night, Deadly Night was a festive slasher I have long wanted to see. While there is the dip in excitement towards the end it still wasn't a bad film. I liked the killer's twisted sense of right and wrong, while his backstory makes his antics a little bit understandable. A fun alternate choice of film to watch this Christmas. The film can be currently found on Shudder.
SCORE:

Posted by Daniel Simmonds at 02:33