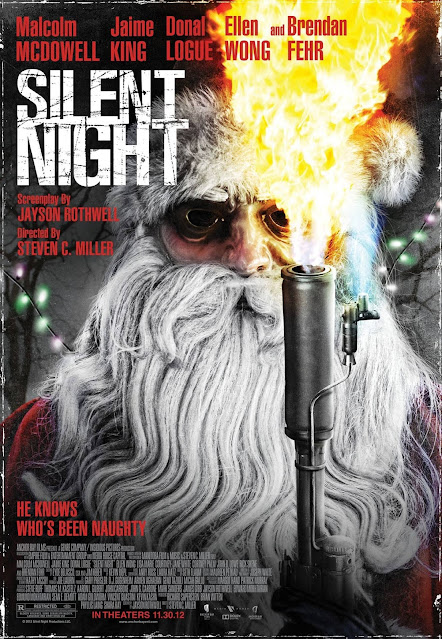 After watching the classic Christmas slasher Silent Night, Deadly Night I got a hankering to see the rest in the series. I didn't get too far with that due to there only being the first two entries on Shudder, but what I did find was the Steven C. Miller directed 2012 remake with the snappier title of Silent Night. Remakes really can be hit and miss, but upon noticing that one of my favourite genre actors, the legendary Malcolm McDowell was in it, I just had to give it a watch. Whether the best or worst film ever made it doesn't matter, for McDowell never fails to put in a spirited performance whatever the role, and here he certainly doesn't disappoint.

It is Christmas Eve in the sleepy American town of Cryer and there is a serial killer on the loose dressed like Santa. Due to nothing exciting ever usually happening, the local sheriff, Cooper (McDowell - Rob Zombie's Halloween, A Clockwork Orange) relishes the chance to prove himself by hunting the man down, but one of his subordinates, Aubrey (Jaime King - My Bloody Valentine, Sin City) is determined to take things more cautiously. As the body count ramps up it becomes apparent that the crazed killer is targeting people seen to have sinned, and it becomes a race against time for Aubrey to find and stop the maniac before those she holds most dear are taken from her. 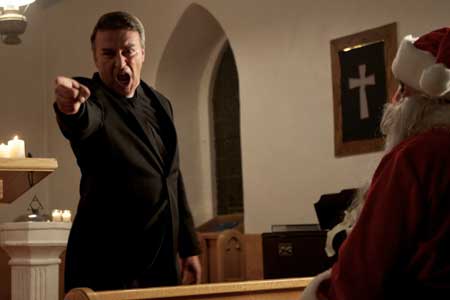 I can't say Silent Night started off good, the first kill, that takes place during the prologue was inventive (a man tied to an electric chair covered in Christmas tree lights) yet tame, and the same could be said the the next kill that shortly follows. With that and the style that felt very much from the early 2010s I was prepared to be watching a bit of a dull trainwreck. I needn't have worried though as it wasn't long before a woman was being fed feet first into a wood chipper! The kills come thick and fast after this and while none quite match that brutal way to die I was still invested to see what would follow.

Another part of the film that was quite tremendous was McDowell, he has the ability to make any role feel alive and full of energy and here that was true. In many ways he was playing almost the exact same character as he played in Rob Zombie's Halloween films. He is full of false confidence and arrogance, convinced that he will be the hero that will save the day. He was so similar in the way his character acted that it occasionally felt like it was Dr. Loomis playing dress-up. Regardless of the sense of familiarity this character had all the best lines, and quite rightly stole all the scenes he appeared in. Other characters didn't leave as much of a lasting impression, but protagonist Aubrey had a lot more to her character than initially appeared. She has her own personal demons, and refreshingly these demons are never completely spelt out, other than she made a mistake in her past that possibly led to the death of her husband. It was fun to see some faces I recognised in the supporting cast, most notably Donal Logue (Harvey Bullock from Gotham) as a grumpy Santa impersonator, and Ellen Wong (Knives Chai from the almighty Scott Pilgrim vs. the World) as the police department's gossipy receptionist. Aside from these and a few other key characters, the rest of the cast didn't work as well. The majority of the victims were irritating so there was never any kind of peril felt for them. 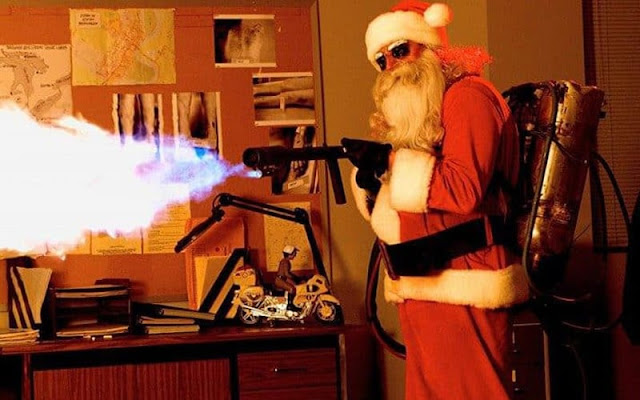 Silent Night is a loose remake in that it takes elements from the original but then uses them to do its own spin on the story. This time around the identity of the killer remains a mystery until the film's conclusion, so skipping the whole storyline about a boy growing up in a strict orphanage. This worked in the hulking killer's favour, as did giving him a Santa mask to wear. Other parts were liberally sprinkled throughout, such as a character impaled on mounted antler horns, a teen visiting his dementia suffering grandfather, who then breaks out of his stupor to warn the boy (that scene felt a bit bolted on), a thrown axe, the killer rewarding those he saw as not sinful, and a cheeky reference to the infamous "Garbage Day!" line from Silent Night, Deadly Night Part 2. The focus for the remake is very much on the police force out to stop the killer, where the original was invested fully in the killer himself.

I enjoyed Silent Night, it was a halfway decent entry in the Christmas horror genre despite its faults. It could be argued the finale taking place in a location that was bathed in red emergency lighting didn't really fit together that well, especially with the use of apparent hand cameras to film it, which were constantly whipping around in a style that reminded me of 28 Days Later. Then there was of course the bland opening that felt like a poor man's Saw. McDowell really saved the film for me, I expected a token appearance but he actually ended up playing quite a big part, which was a great thing. Silent Night is currently streaming on Shudder.