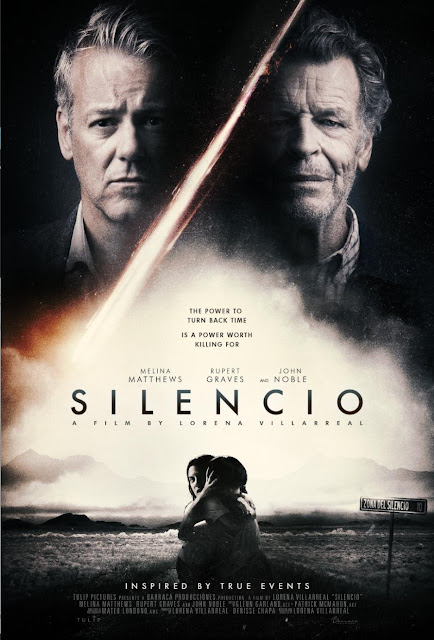 Silencio was certainly a different film to what I had in my head it would be. Maybe somewhat foolishly for someone who blogs about films I really don't like watching trailers or even read any synopsis for films I am going to review. So, I figured from title alone that the Lorena Villarreal (Las Lloronas) written and directed Silencio was going to be about a serial killer. I was utterly wrong, instead this low budget thriller/drama deals with time travel of all things.

James (John Noble - The Lord of the Rings: The Return of the King) and his research partner, Peter are two scientists who happen to discover a fragment of a meteorite while investigating a crash in the 'zone of silence' (a real life urban myth is that this zone, located in the Mexican desert is a place where radio waves are unable to penetrate). They inadvertently activate the stone's latent power and James is shocked to see they have travelled back in time and space to the exact location where his entire family were killed in a freak accident some years previously. With knowledge of what is to come, James is able to alert his family, but it is only his granddaughter Ana he is able to save. Some years later and Ana (Melina Matthews - Mama) is now grown up, with a child of her own, while James suffering dementia lives with her. A young thug (Hoze Meléndez) one day forces his way into their home, desperate to retrieve the stone for his client, this sets into motion a tragic chain of events, as well as Ana's realisation that she will be able to prevent all the trauma that has happened should she find and use the stone for herself.

I am a huge sucker for time travel in films, especially when it is done correctly. With Silencio there are parts that work and parts that make no sense whatsoever, with the viewer having to trust in what characters believe in order to accept these ideas. Obviously, a time travelling stone is a bizarre thing in itself, but then you have all the weird rules the characters make up for it. Like you can only activate the stone at exactly 03:33 in the morning, or that if you use it to save a life then someone else you know will die in order to correct the balance. These rules didn't appear to have much evidence to back them up regardless of if they are true or not, and that last one the film really stretches the credibility of. As if this wasn't enough there is also a supernatural element stuck into a subplot, about a man who is able to commune with the dead and whose ability to do so is the event that really kicks the film into gear.

Silencio doesn't have the largest pool of characters to play with, and so with the thug hired by an unknown person it soon becomes crystal clear who this person will turn out to be by process of elimination. Without ruining that twist I will say the motivations of this antagonist was actually a decent one. Often the best bad guys are ones who are doing despicable acts with the belief that they are in the right. Such is the case with this one who may be a selfish character but you can see things from their perspective. Elsewhere, and with characters I can discuss, Ana was fine, not amazing, but fine. I thought Noble gave a bit of a strange performance, he was meant to be a grandfather but I could never shake the feeling he was trying too hard to be a kind old man, he felt almost like a caricature, someone who wouldn't feel out of place in a Werther's Original advert. Special mention goes to Rupert Graves (Sherlock TV series, V for Vendetta) playing Peter, he brought with him some good acting. 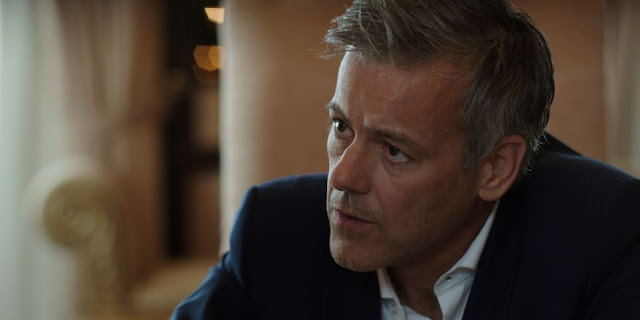 The general story here wasn't bad, though the low budget kept things a little tight and reduced in scope, including a bit of a cheesy sounding score. I did like how the time travel was handled, and despite a first act that felt a bit poorly paced things pulled together for a maybe slightly too dramatic finale that nonetheless played out in surprising ways. Silencio is released by High Fliers Films on 10th January 2022.