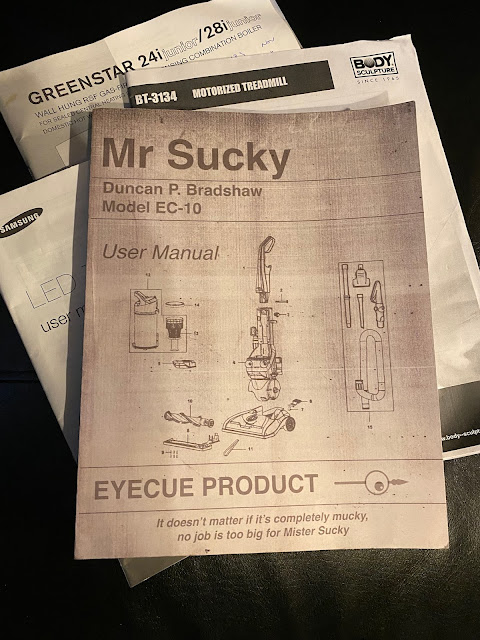 I went onto horror author Duncan P. Bradshaw's website in search of his latest book, a choose your own adventure comedy horror that sounded quite neat. I didn't find it there, I did however re-discover an earlier book of his, Mr Sucky and so I happily purchased that. I have an annoying habit of buying books but taking decades to get around to ever reading them, but as soon as this arrived in my letterbox I knew it needed to be read straight away. It isn't often I will mention a design of a book in a review, but I must here as it was so striking and such a cool idea. I was initially confused opening my package as I appeared to have been randomly sent an instruction manual for a hoover, it took me slightly longer than I would care to admit to realise that it was the novel (possibly novella) of Mr Sucky. That was such a cool idea for a book which turned out to be the most enjoyable story I have yet read of Bradshaws.

Serial killer Clive Beauchamp isn't having the best of days, finding himself killed by his potential new victim even before breakfast is over at the hotel he was staying at and dumped in a broom closet. Things start to look up when a disciple of a demonic entity known as 'Keith' resurrects him, but due to an incident with an air conditioning unit the disciple mistakenly thought the plan was for Clive to come back as a vacuum cleaner rather than into the body of a powerful killer, and not just any cleaner, but one of those ones with the smiley face. Luckily it turns out he has a whole host of supernatural powers with which he will be able to carry out his plan of not only killing his murderer, but also dispatching the staff and other guests who passively looked on as it happened. The biggest danger for this agent of the devil it turns out is not any external threat, but the deranged other personality of Clive's who has gotten sick and tired of being relegated to the shadows of his mind...

Bradshaw is an expert of blending horror with utter nonsense and here he is on top form. The world of the book is a ridiculous place full of idiots and morons, one in which a killer hoover doesn't feel as outlandish as it otherwise would. The format of the storytelling was an early highlight for me. Much of the nineteen chapters is told from the perspective of Clive, but not even with him recounting events in a past tense, instead it is him in the moment experiencing things at the same rate as the reader. It is here that the split personality idea really comes to fruition as Clive and his other side hate each other. While Clive is the one in control, his other personality is always interjecting, typically with a whole host of insults and put-downs. It's quite possible this could have gotten a bit exhausting but then the format changes up and down. You have chapters set before Mr Sucky's start, you have chapters set in the future that recount the events as they happened. My favourite chapter was one that told the story of what happened to a group of golfers staying at the hotel, due to them checking in with comedic fake names their story is told with the characters being referred to by those names. So, you get a harrowing story about the fate that befell Captain Wangstain, Bonzo Bangana, Petey Beef-Curtains and Zargon Thirstbladder. This kind of infantile humour doesn't usually appeal, but it is so thick throughout Mr Sucky that I couldn't help but get on board.

Another part that typically I wouldn't enjoy as much is the intense description of all the bloodshed that is inflicted on characters. Here, with all the old ultra violence being carried out by a hoover it was made a lot more fun, and it always impressed with how inventive and deadly the methods were. From the hoover supernaturally powered to suck in all manner of body parts, to a lethal plug wire that is able to easily sever through limbs, this was all both super gross and amusing.

Mr Sucky was a very simple idea that worked extremely well due to Bradshaw's off kilter sense of humour and the way the story is laid out to the reader. From the wonderful book design to the attention to detail this was an enjoyable story from cover to cover.