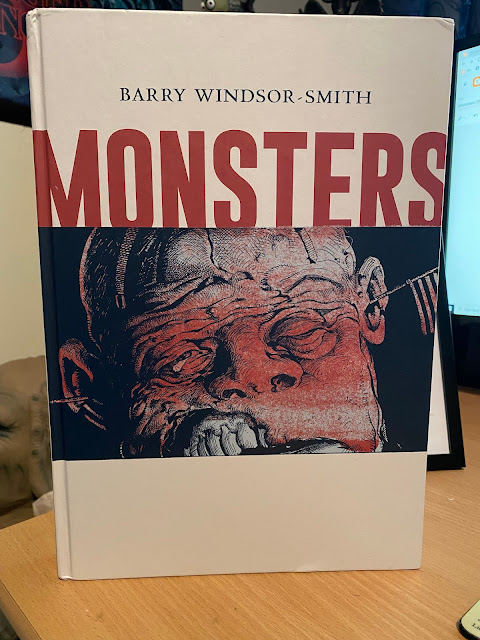 Earlier this year my best friend brought me a graphic novel that was recommended to her by someone at a comic book store. That novel was Monsters which was created by Barry Windsor-Smith (who has worked on Avengers, Daredevil, Conan, as well as wrote and drew the Wolverine origin story 'Weapon X') and was his first book in sixteen years. It apparently originally started life as a 23 page Hulk story in the mid eighties. I was warned that this wasn't a happy story, but that also meant it would fit right at home on The Rotting Zombie.
The novel takes place over a variety of different time periods and actually occurs in a similar fashion to an idea I once had for a short story. That is that Monsters almost takes place in reverse order. After a wild prologue set in 1949 we skip forward to 1964 where a young homeless man, Bobby Bailey is trying to join the army. The recruiter, Sergeant McFarland knows the boy isn't fit to serve but had special instructions to contact a man working on a top secret project codenamed 'Prometheus' should someone meeting certain criteria apply to join. The boy is taken away, where he soon becomes a test subject in a project that had been devised by the Nazis to create a super soldier, this leads to quite a nasty outcome for Bailey. McFarland meanwhile having a power similar to the 'Shining', begins to get supernatural visions about Bailey's fate, with guilt eating him up he sets out to right the wrong he thinks he may have caused. This leads to a story that falls back in time, at first heading back to the late forties when Bobby's father Tom returns back from World War II a changed man, then to the end of the war when Bobby's mother, Janet, anxiously awaited her husband's return, and then even earlier to show the moment that changed Tom during his war time experiences. 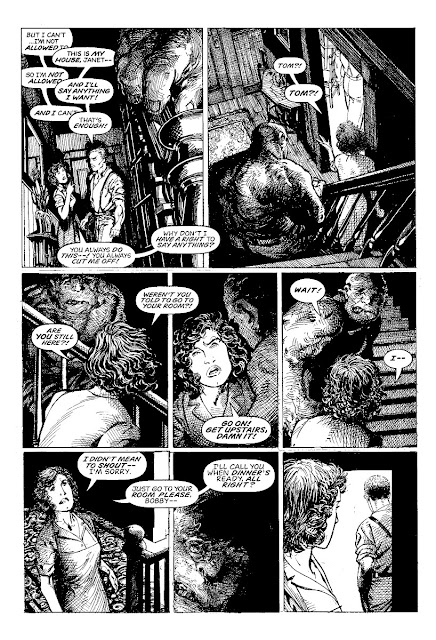 Things start off on a dark footing and this is a vibe that persists throughout the 365 page novel. I was surprised to find the style of leaping back through time, after the first section the majority of the book takes place in the past before returning to the present for the final part. It is obvious the 'Monsters' in the books title only tangentially refer to Bobby's horrific transformation. There is an 's' on the end of that title for a reason as a lot of characters here fit that term very easily. From the cold army officers happy to let the twisted experiments occur, to the ex-Nazi scientist working for them, all the way to Bobby's nasty father, a man who beats his wife and child. All fit that title. The time skips are put to good use, with each jump backwards more and more pieces of the puzzle come together, and you find two very different families unknowingly intertwined with each other throughout the years. I loved how parts of the story are mentioned but it is only later on that their purpose becomes clear, even going as far as to show the same scene but changed to fit whichever character is remembering it.
The art throughout the book is fantastic, this is all black and white with intricately detailed panels. Characters are full of emotion yet drawn realistically, the whole novel looked like a work of art. It is often dialogue fed with each new panel transitioned using flowing speech. One tiny issue I had was in the middle where a lot of pages are made up of Janet's personal diary entries, the writing joined up was occasionally a little hard to read, yet like a magic eye picture I could always make sense of what initially seemed like a mass of jumbled letters. As to the story though I had no complaints, I enjoyed how everything was linked to each other. I would say by the end when we return to the present day of the mid sixties I had almost forgotten who the characters here were, and what their fates had been, that was a small thing though. The war had an effect on humanity that persisted throughout generations, it was interesting to see that explored here with a slight supernatural angle to it, it made for a maturely told story that couldn't ever get dull. Despite the more action packed moments at its heart this is an exploration into one family's turmoil with the horror coming from the situation rather than any outside force.
I wouldn't say I enjoyed Monsters in the sense it was a happy and fun read. I did think it was a very effective story, one that used the medium of art to tell its story in a satisfying way. It's been quite the week for getting to the end of good books, Barry Windsor-Smith's Monsters was well worth a read.
SCORE:

Posted by Daniel Simmonds at 08:36

This came highly recommended by the comic shop owner and I had a flick through the pages myself. Seemed to have a lot of "Monsters" throughout as you put it and I thought the artwork was truly exceptional.
Fantastic job on the review, I very much enjoyed your thoughts on the book and was also entertained from beginning to end! Excellent!

Thank you for the kind words. Usually I breeze through graphic novels without paying that much attention to the art, but this was different, it was so impressive.