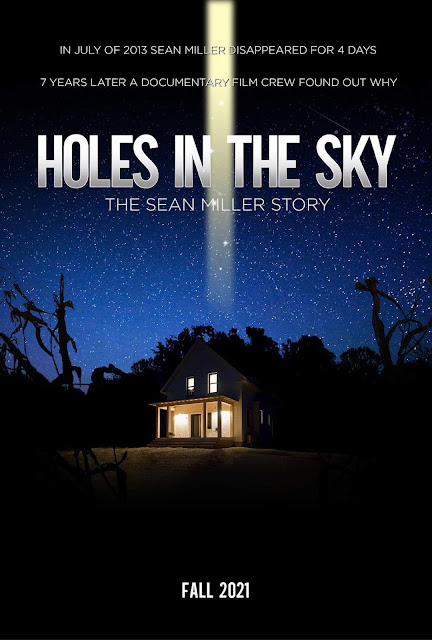 It was just last month when I reviewed the found footage horror The Alien Report that I stated found footage films that deal with aliens is quite a rare thing. Well, one month later and I have just finished watching Holes in the Sky: The Sean Miller Story, another alien focussed found footage horror, so perhaps they aren't so rare after all. This one, directed, written by and starring Ash Hamilton (associate producer for Camp Death III in 2D!) is in the form of a mocumentary and has some interesting ideas, but the central hook wasn't enough to really get me biting.
Holes in the Sky takes the form of a fake documentary that explores the events that led up to a 911 call to the police by a frantic woman alleging that a group of unknown people were trying to get into her house. Most of the footage used was that taken by director Ash Hamilton (Hamilton playing himself) and his crew, that includes cameraman Brett as well as his wife Chanell (Chanell Hamilton playing herself). They had been planning on creating a documentary exploring what happened to a man named Sean Miller (Sean Ed) who vanished for four days in mysterious circumstances in the past, and so they had gotten permission to stay with him and his wife at their remote property for five days to get interviews. The longer the crew stay the more they begin to experience unexplainable phenomena, and they begin to fear that the events that led to Miller going missing all those years ago are once again repeating themselves. 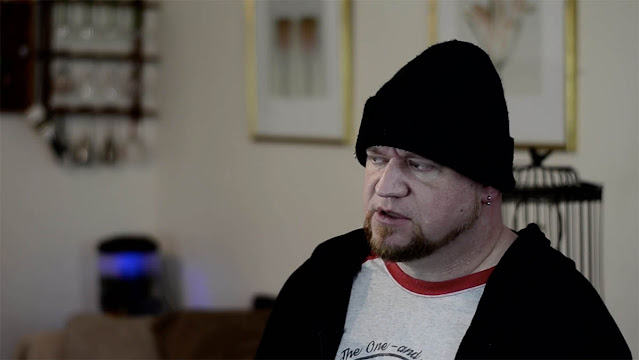 As a hook to get the viewer involved I didn't feel the 911 call was the best choice, or at least the parts that open up the mockumentary. It didn't leave me with a burning desire to find out what was happening even if perversely that 911 call in its entirety makes up the best scene of the movie. The documentary we are watching isn't the one that Ash is making, I admit for the longest time I was confused about this fact, but this confusion was helped in part by the flow of Holes in the Sky. For the first fifty minutes or so we follow Ash and his crew as they explain their motivations for heading to see Sean Miller. Going by what they say there wasn't much motivation. It is established early on Miller went missing for four days and was then found over a hundred miles away but that is it, there are no other details given and so for Ash's doc within a doc I wasn't that interested. Other than to provide motivation for the characters being where they are this didn't add much of anything to the story of what the 911 call was all about, certainly not important enough to take up a sizeable chunk of the movie.
Once at the house things do improve, there are interviews that take place after the fact with the way things characters say things seems to indicate something awful was going to happen in the pivotal scene. The film for the most part takes place in sequential order, going through the events of the five days leading up to that fateful night. There are some nice moments here, and I did like that a few of the better scenes take place in broad daylight. Scenes such as a drunk visitor going to speak to a creepy figure standing in a field next to the Miller's home were fun, and there are a couple of nighttime scenes that worked well. The finale was the best part, the 911 operator came to be my favourite character, he had a lot of good dialogue. I also thought it was kind of cool that the tinny recordings of the 911 call are matched up with phone footage recorded in the Miller's home, and so you get characters on film talking to each other, but with their voices sounding like they are coming from the operator's recording.
It wouldn't be fair to say Holes in the Sky was boring, but it sometimes felt at odds with itself, unsure if it wanted to tell the story that Ash (within the film) was trying to tell or if it wanted to tell the story of the fateful night. Admittedly I am stricken with man-flu (TM) at the moment and so am feeling a bit dozy, but I never felt it was that well explained that there were in fact two seperate mockumentaries going on. Effects are minimal, you get the traditional distorted footage effects, and some blurry footage that makes it hard to really see what has characters so worked up. Towards the end there were a couple of nice moments that looked pretty good. Kudos also has to go to the film's score by Brian Jones, I especially thought the sorrowful main tune that plays was effective, especially during the epilogue.
Holes in the Sky: The Sean Miller Story wasn't bad at all, I thought Ash playing himself was a lovely idea and it was edited together well, I just didn't find the central plot point to be one that really grabbed my attention like I felt it should have done. The film won Best Reality Horror, Best Sci-Fi Feature and Best Director (Feature) at the Fright Night Film Festival and won Best Horror Film and Best Science Fiction Film athe the Multi Dimension Film Festival.
SCORE: