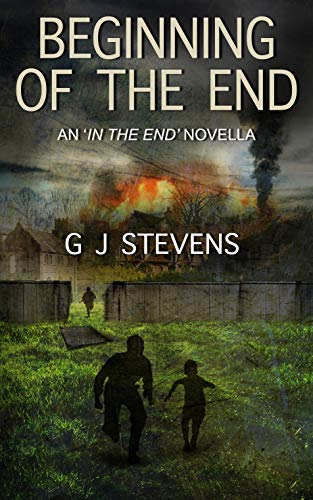 It was July of this year when author G.J Stevens contacted me to let me know that if I joined his mailing list I would be entitled to receive a few examples of his work for free. I did so of course, yet it took me until now to get around to reading one of his books. That book was the novella Beginning of the End which takes place in his 'In the End' universe. After an unsure start I began to really get into this, loving how this story so perfectly fitted a shorter format.

The protagonist of this is sixteen year old Jordan, who one day gets unexpectedly caught up in an unfolding nightmare in his sleepy Cornish village. After his elder brother gets caught up in a violent altercation outside his house events escalate to the point where his mother screams at Jordan to run away just before she gets attacked also. Before long the boy figures out that there is something wrong with the majority of the villagers, and so with the arrival of the army he thinks salvation has arrived. It quickly becomes clear that the army have no intention of helping out any survivors, instead they are hell bent on killing everyone they see, whilst also installing a large concrete wall around the village to stop anyone escaping. Teaming up with a young boy, Jordan, ill prepared for such a task, sets out to find a way to escape.

So Beginning of the End is a zombie story, but one in which the infected take a back seat to the horrors of the callous army. Over the seventy five page novella the infected rarely feature at all, so little do they appear that Jordan's actions initially felt a little bit over the top. He goes into full on survival mode without much really occurring to warrant this, the arrival of the armed forces really improved the tale though. The army here reminded me more than anything else of the soldiers from George Romero's classic film The Crazies. These faceless characters shoot first and ask questions later, leading up to some great parts where Jordan is stealthing around his village, the only advantage he has is knowing the layout of the place, as wearing just pyjamas and slippers and without any kind of weapon he is powerless against the soldiers.

Having a teenager as the protagonist is nothing new of course, but adding in an even younger person for him to look after was a great idea. The story was satisfying, I had an idea where it would be headed but it remained tightly paced with a clear goal in mind for the protagonist. There is a good sense of place going on, the descriptions of the soldiers house clearing in the background was well written, it added to the tension. It all leads up to an exciting finale and an ending that is both open ended and also wraps up this particular story. An an introduction to Stevens' In the End series it has made me want to read more, just with my terribly slow reading habits I can't say when I will get around to that. If you want to check this out for yourself then join Stevens' mailing list here to find out more details.