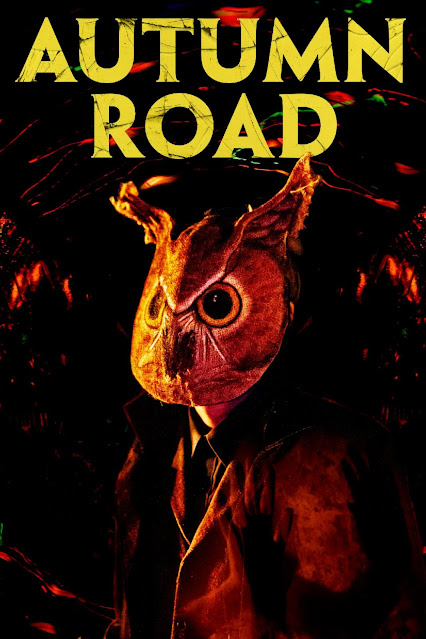 Autumn Road is a Halloween themed horror that was both written and directed by Riley Cusick, who also starred in two of the leading roles (due to him playing twin brothers). There were certain elements to this that left me a little more confused than anything, the frayed edges were for me a little distracting.

On Halloween a young girl goes missing, with it heavily implied that she was accidentally killed by mild Charlie and the body disposed of by his possibly psychopathic twin brother Vincent. Ten years later and after the sudden death of her best friend, Laura (Lorelei Linklater), the sister of the missing girl returns to her hometown. The twin brothers (both played by Cusick) now run the local haunted house attraction and are much as they always have been, Charlie still meek and mild, his brother Vincent aggravating and intense. As Laura begins to get close to Charlie due to their shared memories of her sister, Vincent's antisocial behaviour starts to increase to dangerous levels.

There was a strange dream like quality to a lot of Autumn Road that made it hard to really understand what was real and what was not. I didn't even realise Cusick was playing both the roles of the twin brothers so in that respect he did a great job. Until the end credits I was convinced it was two different actors. However, due to the way the film is shown I spent the whole movie expecting a twist that Vincent and Charlie were one and the same. Vincent is just such an odd character who didn't feel like a real person. Throughout the film he carries out a series of increasingly crazy crimes yet there is barely any repercussions and certainly the police don't appear to be involved at any point. This is despite Vincent making only the tiniest effort to disguise himself while he commits these crimes. That was one of the abrasive edges that got in the way of being able to be fully involved. Outside of a nasty looking curb stomp scene there seems no repercussions for anything that Vincent did.

The prologue set when the characters were kids doesn't tie up that storyline, the young Vincent on the verge of accusing an elderly man for the girls disappearance before it all skips forward a decade. It doesn't help that the last time we see the girl she is still very much alive if in a bit of peril. Laura spends the film looking sad but with no real personality to her. Her friend getting killed was meant to shock, and it did do that, but it was also kind of amusing how out of nowhere it happened, especially with how it happened. That Laura then turns up at her hometown in the very next scene while wearing the exact same clothes was a bit confusing as I didn't initially realise she had travelled home off camera. That was a main issue throughout the film, just how ethereal everything felt, sometimes feeling like the story was running on dreamlogic. Still, the set design and costume design was always enjoyable, particularly with the former with the haunted house attraction that features in a few key scenes, and the special effects while sparse did sell things well, that curb stomp scene as I mentioned was quite gnarly looking.

Autumn Road felt like life need breathing more into its central characters. Vincent didn't feel like a real living person, while both Charlie and Laura suffered from having barely any personality to them. There was goodness to be found for sure, some of the cinematography was really nice, and the use of flashbacks worked well, especially as the flashbacks were the one part of the film that felt good. As competently made as this was there was just something a little strange about the feel to this. Autumn Road arrived on Digital HD and Cable VOD on November 23rd across North America from Gravitas Ventures.