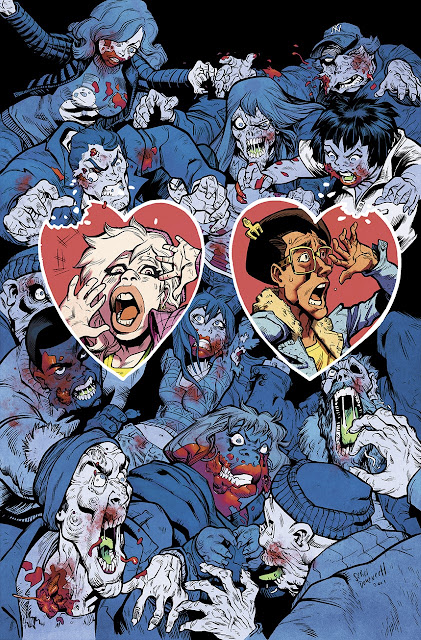 Zombie Date Night is a 32 page comic book that was written by Steve Urena (Slow Pokes),drawn by Sergi Doménech, edited by Allegra Calderaro, lettered by Anthony Rella and coloured by Josh Jensen. One look at the hyper stylised artwork and it should be no surprise this particular zombie outbreak is of the comedic kind. Earlier this year it enjoyed a successful Kickstarter in which it raised $6,071 of its $3,000 goal.

Nerdy Jack has managed to hook a date with a girl he had been speaking to on a dating app, he chooses the local mall as the place to meet, a place that is full of friends and family, including his grandma Abuelita, and his best friend Blake. The girl, Ginger, turns out not to be entirely like Jack expected her to be, but then nor is he to her (thanks to some photoshopped images he put of himself on the app). With a bad start their date goes from bad to worse with it seeming increasingly unlikely the two will be a match. Perversely it is the sudden zombie outbreak that occurs in the mall that finally starts to unite them. Teaming up with Jack's family and friends they all start to battle their way to the mall's rooftop where they hope they will be able to get help. 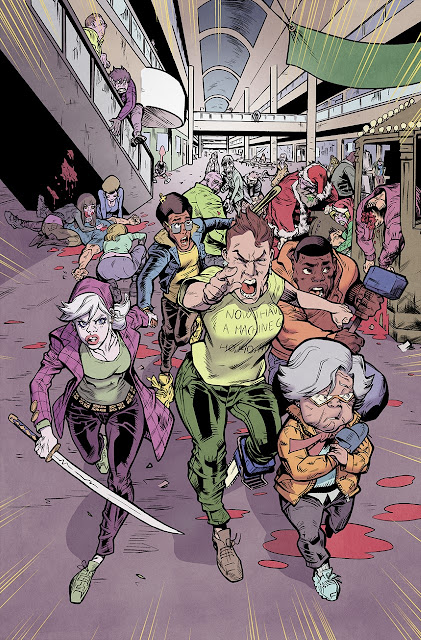 This felt very modern, I'm used to reading comic books that feel trapped in time with it never really clear what decade it is meant to be set. Here, things such as lockdowns and anti-vax conspiracy theories both get a mention, while the set-up of the two protagonists meeting on a dating app also felt quite present day. The characters here were all irritating in their own way, Jack in particular is a really flawed one with his flaws continuing well past the initial discovery of the undead invasion. Perpetually furious Ginger is no better, their initial zero chemistry is obviously one of the comedic elements but I did wonder how they ever decided to meet up when they seem to have nothing in common. Shoutout goes to the war veteran character who at some point in the story behind the scenes changes her false leg to a chainsaw attachment!

I thought the artwork fitted the comedic vibe well, each panel was full of life, with characters wearing their emotions visibly on their faces. I think my favourite part about the art was the colouring, there are lots of vibrant, yet muted colour schemes going on, which even applies to the undead and their bright green tongues, visually attractive stuff. The story is mainly action focussed once things start happening so there wasn't a whole tonne of character development outside of the two leads, still there were some unexpected moments throughout the story, and I liked how there are unanswered questions as to how these undead operate.

Zombie Date Night was a fast moving story with a cool art style, the up to date setting and the mainly younger cast may have made me feel a bit old but I appreciated this as a slice in time snapshot, something that not many zombie stories try to achieve. From the open ending I expect there will be more to come from this new undead series.