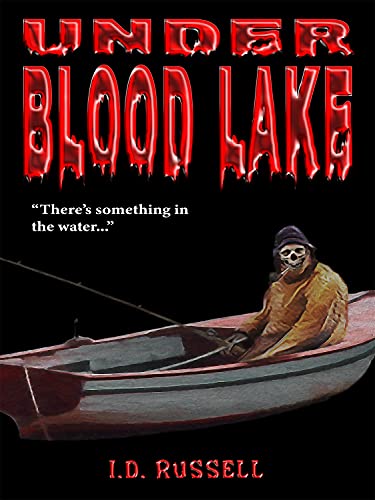 A few years back I had the pleasure of watching Ian Russell's low budget comedy horror film The Killing Death. A stand out character from that film was Frank Malone, a no nonsense jaded super detective. Russell is also an author, and his novelisation of the film expanded on the story greatly. His latest novel, Under Blood Lake is a prequel of sorts, though unrelated to the actual story of The Killing Death it does have the wonderful Frank Malone character as the central protagonist.

It is the eighties and Detective Inspector Sergeant Frank Malone learns that his brother has died in the sleepy fishing town of Lakeshore under (blood lake) strange circumstances. His boss, maybe wanting to get Frank and his blunt way of performing his duties out of River City, gives the man a weeks leave to go and get his brothers affairs in order. Frank is convinced there is more to his brother's death than meets the eye, with it already being suspicious that he apparently died by accidentally driving his car into the lake while drunk, when it was known that he was a teetotaller. Lakeshore is a place that is not welcoming to outsiders and the more Frank tries to learn exactly what happened the more resistance he gets from the locals who just want him to leave.

Russell describes the book as a mix between H.P Lovecraft's Shadow Over Innsmouth and Dirty Harry. Both these inspirations are obvious to see. With the former you have the legend of fish people said to live in the lake, and the later is Frank's often wild way of performing his police work. Frank as a character reminds me more than anything of Leslie Nielsen's character Frank Drebin from Police Squad, it helps that Jeremy Dangerfield who excellently played Frank in The Killing Death has a similar look to that character. In that film and book Frank had a straight man to play off against. I had a mild fear that Frank unleashed on his own would become a bit exhausting due to his crazy ways. This doesn't really come to pass due to the assortment of characters Frank meets who are just as weird as he is. From the alcoholic Captain Jack to the sex crazed host at his Bed and Breakfast, there aren't many typically normal people to be found. Unlike Drebin, who often seemed to be successful in spite of his insanity, Frank is a great detective, so his journey and unfolding investigation plays out well. It could be said the story wraps up a bit too neatly in a whirlwind of a final act, but I loved this unleashed version of the character and how quickly he resolves everything, in comparison to a Frank trying his best to play by the rules.

Under Blood Lake is comedic but it also tells a horror story, these two elements blend together satisfyingly with neither over shadowing the other. There are plenty of ridiculous conversations with funny wordplay that was always entertaining. I also appreciated the melding of the real with the fantastical. Without going into details the Canadian folk singer Stan Rogers features heavily here. I assumed he was a fictional character but then there is an afterword by Russell who explains the inclusion of this singer into his story was done out of love for the artists work. Ideas such as this reminded me a lot of the far fetched fiction of Robert Rankin, a sub-genre that has always appealed. The story wasn't as light as I thought it would be, well as light as a story can be that starts with a man and his girlfriend getting decapitated. Some of the events of the book get dark, from murder all the way up to rape. It was a decent mix, maybe my favourite parts being Frank's frequent encounters with the bumbling goons of a local gangster.

Russell has a style of writing that just makes his novels so easy to read, Under Blood Lake was an enjoyable breeze to get though, the story may not have been too surprising taken as a whole, but there were definite moments I did not expect, and the character of Frank was always a central highlight.

Posted by Daniel Simmonds at 11:39