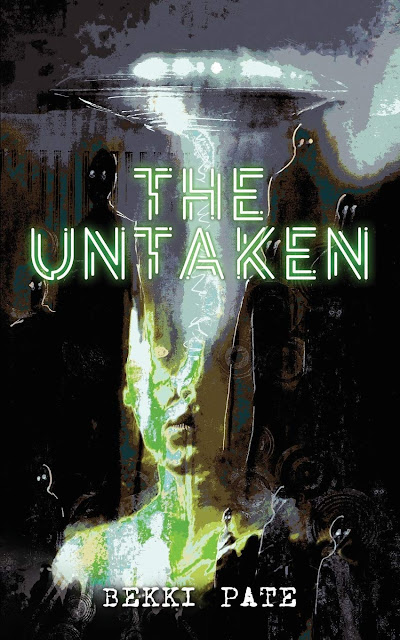 One of the benefits exclusive to eBooks is that you can't tell how big a novel is going to be unless you specifically search that out. Bekki Pate's The Untaken is 418 pages so was longer than most recent novels I have read. I have a habit of not wanting to really know much about any film or book I consume, with a novel such as this it really made the experience a whole lot better as this is a morphing, evolving story that skirts across several different genres.

The first act of the book was The Untaken at its most horror like, I had a real feeling of James Herbert's The Dark reading this. Taking place entirely within the household of a family that includes Mitch, his brother Jacob, their mother, Clara, as well as Jacob's wife Sophie and their new-born child Ava, things are not right. Everyone is behaving strangely, Jacob is drinking heavily but unable to notice he is doing so, Clara is similar in that she is smoking very heavily but insisting she isn't. Mitch meanwhile is having troubling nightmares. This first act worked so darn well due to the claustrophobia that Pate brings. The whole situation is made sinister both due to all the stuff going on, and that the reader has been dumped right in the middle with no context for it all. I would have been happy should this have been the entire novel, in particular Mitch having feelings for his brother's wife all read as so believable. It was a shock then that the second act not only takes place a number of years later, but that there is a new cast of characters introduced with their own seemingly unrelated story going on. So unrelated that it is even a different type of horror.

The more I go into the book the less I want to say about subsequent acts. The second act is more sci-fi horror. Here we follow air traffic control worker Charlie and her best friend, Ed. Both share a secret, that for many, many years they are constantly getting abducted by aliens and having experiments performed on them. These aliens are the classic large headed 'greys'. This part of the novel was just as good as the first act. For one I was really confused with how this at all related to act one, but that I knew the book would eventually reveal this to me. I liked the found footage idea that the duo are constantly filming themselves to try and get evidence of what is happening, and the nightmare recollections of their abductions. The third act again switches things up and takes things into a more action orientated direction that takes place in a different country entirely. There were parts to this that I didn't think worked as well, namely the introduction of an almost comedic character named Chris who felt like he came from a certain Greg Mottola directed film from 2011. The other part I'm not sure I was on board with was the suggestion of more story to come. The plot got to a natural stopping point where things could have been wrapped up, instead it leaves it all wide open for a follow up.

Some parts worked better than others but I loved all these changes to my expectations. It may be goofy how the various stories all linked up but it gave a good horror vibe, invisible monsters were described in such a way that I could easily visualise what these looked like. For the issues I had with the third act it did have some of the more descriptive moments. I also liked the mix of sci-fi and horror, specifically making stereotypical grey aliens into a force of horror. The book was an easy read, it falls prey a bit to an increase in short snappy chapters designed to ramp up the excitement towards the end. It works in a normal context, but with me relegating reading this to a chapter per lunch break (I get two a day in my day job), it meant that through my own fault the final part of the book took far longer than it should have to finish.

I was constantly delighted with the unexpected directions The Untaken went in. From traditional horror this fell not quite seamlessly into sci-fi with a story that was enjoyable if a little far fetched with respect to the motivations of certain groups. The Untaken is out now from Nightmare Press.