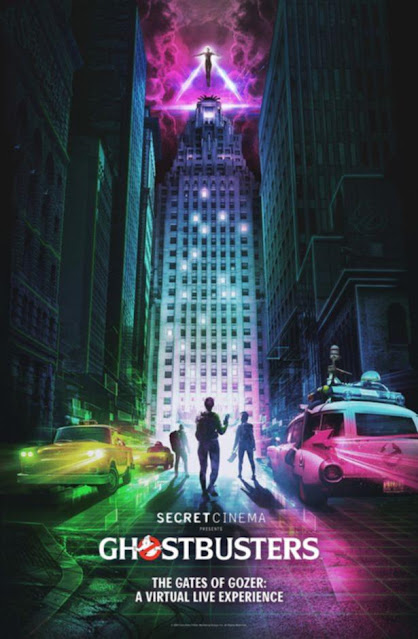 With an increase in reviews this month this shall be my sole mini-news round-up, and mostly based on promises I made to a couple of people. First up though, a bit of late news as I had planned to put it into a proper post but instead decided to incorporate it here. The final Zombies map released for Call of Duty: Black Ops Cold War a couple of months back. It was titled 'Forsaken' and had you fighting waves of zombies at the antagonists HQ. I have to admit I've only played it twice, I was more than disappointed to see that rather than a new location they instead very lazily reused a map from the campaign. It has some changes to it but mostly it felt far too familiar. It's old news anyway as Call of Duty: Vanguard recently released with its own new style of Zombies.

Secret Cinema in collaboration with Sony have announced Ghostbusters: The Gates of Gozer. This is a live experience that is set one year after the events of Ghostbusters. This live event is online rather than in a physical location. In it you compete alongside teammates that may be friends, family, or complete strangers. You all take place in an interactive experience in which you talk to live actors as you undertake missions and visit iconic locations. The synopsis has you as a new student at the Paranormal Institute being trained by the Ghostbusters in how to battle ghosts. I will let the press release sum it up: 'People will enroll to explore the haunted realms of New York in teams of six and they will have the chance to meet new and familiar faces during the show while they get trained in key skills including parapsychology, and science and technology. Once in live paranormal scenarios students must use quick wits, live improvisation, and a range of gadgets to hunt the trickiest or most malevolent of spooks as they work their way through the experience'. General tickets to this event went on sale on November 1st, for more details head to the Secret Cinema website, here.

Comedy crime horror The Killing Death has recently been added to the streaming service Tubi, with the post apocalyptic sequel, Cybernetic Showdown also heading there soon. There is also due to be a double feature DVD being released at some point in the near future.

The Romane Simon directed The Devil In My Heart arrived on all major VOD platforms on November 9th. This stars Emily Killian, Tom Sizemore and daytime soap stars Judi Evans and Matthew Ashford. This is about a woman who is on the search for her missing husband after surviving a violent home invasion.

Posted by Daniel Simmonds at 01:38