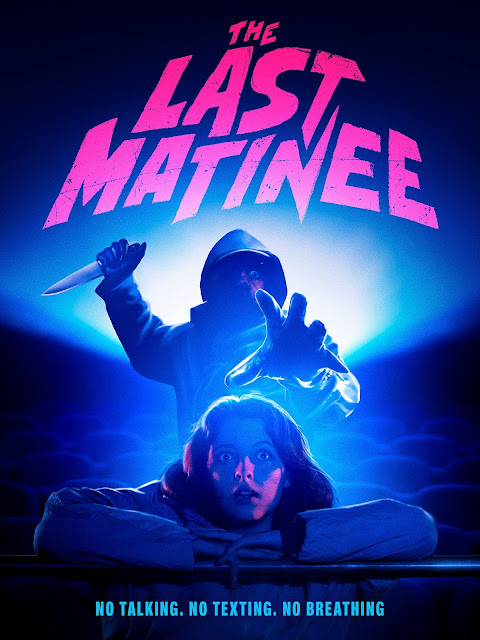 There are few things better when it comes to watching films for review to realise you have come across something a little special. Such was the case with the Uruguayan The Last Matinee (also known as Bloody Matinee, original title Al morir la matinee), a gruesome love letter to the giallo genre of horror/thriller films that was directed by Maximaliano Contenti, who also came up with the idea for it. As the title somewhat suggests, this takes place entirely within the confines of a cinema, to my knowledge the only other horror film I have personally seen with that concept is the brilliant Demons, maybe coincidentally one by director (Lamberto Bava) who himself has directed giallo movies. Sure being a homage it can't be seen as truly original, and it might have a little too much style over substance, but I do love a bit of style.

It is a dark and rainy night and Ana (Luciana Grasso) has arrived at the inner city cinema her father works at in order to cover his shift in the projectionist booth. The last film of the day is a horror film (specifically Frankenstein: Day of the Beast that was directed by Ricardo Islas who plays this movie's antagonist) and it is playing to a dead crowd that is made up of a young boy who has snuck into the theatre, a homeless man, a couple on their first date, a lone girl, and a trio of teenage friends. Unknown to them all there is a secret extra person hidden away, an eye obsessed, glove wearing maniac dressed all in black (Islas). He has barricaded the exit, and as the movie plays out he silently starts to kill the attendees one by one. 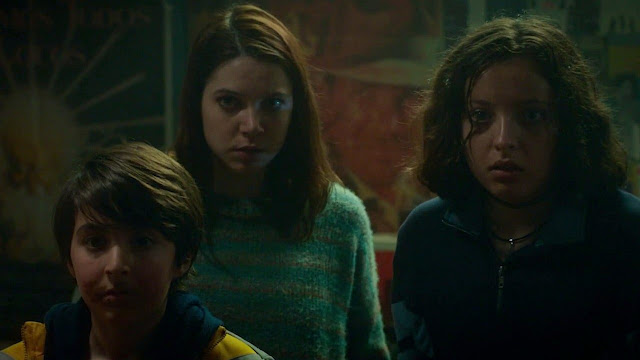 What I know about the giallo genre of films is that they feature a gloved man dressed in black whose motif is to get up close and personal with his kills. That much The Last Matinee gets right, this film also takes a side step into the slasher genre, which adds to the melting pot a variety of unique kills that kept things involving. Right away you could see the style that this film had to it, a lovely opener of the mysterious killer entering the cinema, a slow motion shot of people from the previous film walking down the exit stairs. An extra nice shot of a young boy dropping a bag of gobstoppers that bounce down the stairs, the killer stopping to pick one up and hand it back to the boy. That scene in particular had a wonderful call back right towards the end of the film. The first act of this plays out without any kind of horror really happening. Instead it serves to introduce the various characters who make up the small cast. Some characters had more to them than others, I thought the teenage friends were the best of the lot mainly due to the chemistry they had between themselves. Other characters didn't fare as well, sadly that also applied to final girl Ana. Sure she redeemed herself but she was an unknown quantity for much of the film due to not displaying much personality.

I liked how the film begins its move into horror, especially with the first kill, this occurs simultaneously with the first kill in the horror movie being played on the screen, and also takes place out of focus in the background of another shot. Just one of the stylish choices I loved. From this moment on the kills come thick and fast, each one distinctive even when the same method of murder is used. Some striking ones were a character who gets stabbed to death on a flooded toilet, a character whose death causes the cinema screen to run red when their blood leaks onto the projector, and a kissing couple who get a steel rod rammed through their heads! A shout out also to a neck slice on a smoking character that results in the inhaled smoke coming out the cut. It could have all come across as a little silly, but the kills use satisfyingly practical effect, and they are very gory with lots of effective looking blood. Completing the throwback vibe is the soundtrack, often it uses the film within a film soundtrack but it is at its best in the moments when eighties style synth music starts up. It gets inventive at times also, especially towards the end when it has sounds used in the music that sounds like metal grinding upon metal. 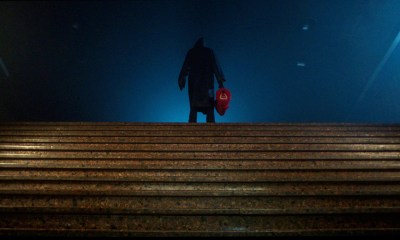 I had zero expectations for The Last Matinee and so I was very happy to see this was a greatly enjoyable slasher/giallo hybrid. The biggest complaint I have is the very basic plot, but just as it felt like the film may never ramp up on the horror it all kicks into place and doesn't let up until the end. Full of style, and with some bloody kills this ticked a lot of the right boxes for me. The Last Matinee comes to the Arrow streaming subscription service on December 1st in the U.S, Canada, U.K and Ireland.