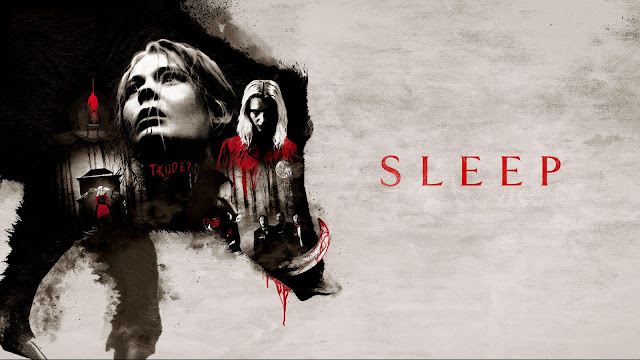 Sleep (original title Schlaf) is a German horror film that was directed and co-written by Michael Venus in his feature length directorial debut, Thomas Friedrich making up the other half of the writing duties. Slow burning horror films sometimes struggle to maintain a good balance resulting in them feeling over long or short on much of anything happening. Thankfully Sleep straddles that line very well.

Marlene (Sandra Hüller) has suffered horrific recurring nightmares her whole life, but after seeing the exact same hotel that features in these dreams on an airline flier, she sees it as vindication that she isn't crazy. Without telling her daughter Mona (Gro Swantje Kohlhof) of her intentions she decides to head to the hotel, Sunny Hill that is located in a remote German village. Once there she promptly has a mental breakdown, it is only after Mona receives a call from a hospital close to the village that she discovers what has happened to her mother. Mona decides to go and stay at the hotel, in order to both be close to where her mother (now in a catatonic state) is being looked after, but also to try and see if there is any truth to her insistence that what she dreams about has actually happened. It isn't long until Mona begins to see eerie similarities between the places and people her mother had previously sketched out and the real life hotel and people from the village's past. As the lines between dreams and reality begin to blur Mona begins to worry that her mother's apparent insanity may be hereditary.

I liked Sleep quite a lot, it wouldn't be truthful to say I was hooked right away but even in the first act I was appreciative of the style and direction of the film. The story is a mystery that unfolds over the course of the hundred minute run time. The main events having occurred many years in the past, it is up to Mona to piece together what has happened, and what link it has to her family, by analysing her mum's cryptic drawings and words. Helping her is the hotel owner, the prideful Otto (August Schmölzer) who has high hopes for Sunny Hill. The small cast of characters have a lot going on, with the intentions of a few of the more key characters hidden from the viewer. Scenes play out rather confusingly later in the film, due to the motivations occurring off film, leading to some surreal moments. Mona herself doesn't have much to her, but I loved this about the character, she is a fresh face in a small village full of secrets so she almost serves as a proxy for the viewer. Despite her lack of emotion for most of Sleep I came to enjoy her, she was strangely likeable.

The film is visually striking at times and even delves into pure arthouse territory om occasion. There is a wonderful scene that takes place in a bizarre dark club in which Mona, her new friends and the club owner are all adorned in day-glo paint. There is an unexplained dream sequence that occurs with a bunch of the main characters that includes full frontal nudity. This was probably my least favourite part of the film as a whole, as naked characters in a void has been done to death so many times before, so despite the strange vibe of the scene it couldn't help but remove me from the story ever so briefly. I did love the transitions between reality and dreaming though which usually had the dreamer flying backwards as if being pulled. The story was simple yet effective, I enjoyed how recurring motives, such as a boar are given greater context later on. For a German made film it was also interesting how some of the countries undeniable dark past is explored here, Otto's nationalistic pride has him not wanting to feel guilty about his country which works in comparison to the more low key story of the village's dark past being forgotten about. The story cribs elements of A Nightmare on Elm Street but done in a less schlocky way, this was never a horror film that tried to be scary, instead it uses horror as a way to tell a vengeful tale. 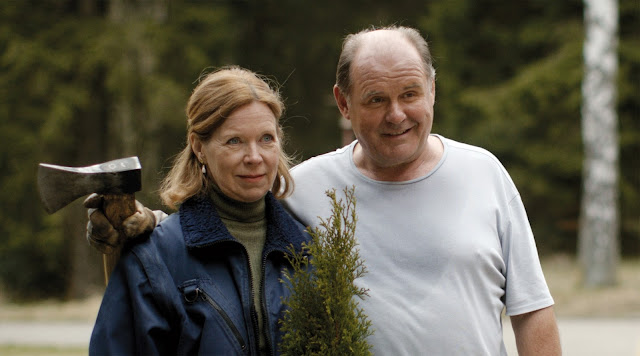 Sleep was a film that slowly got better as it went along, and thanks to its visual style, the directing and the wonderful soundtrack was something that I had a good time with, outside of some of its more cliche moments. Sleep came to the Arrow streaming subscription service on November 1st.