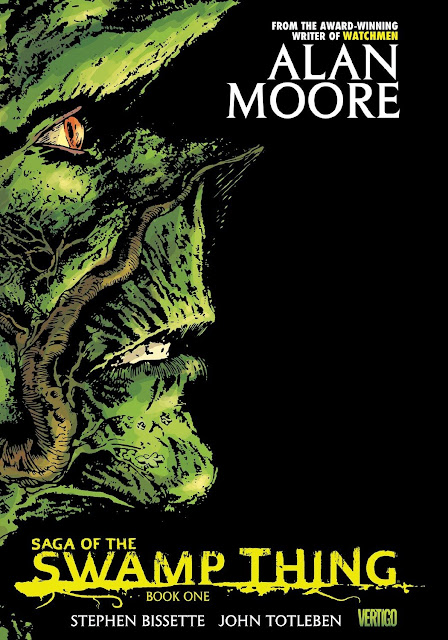 This past weekend I haven't had much chance to work on my blog, actually real life stuff happening for once! This has resulted in me dipping into my 'break glass for emergency' blog posts. Needing to fill that out I have finally gotten around to reviewing Saga of the Swamp Thing: Book One. I finished reading this a month or so ago so I can't imagine this will be the best review, certainly as I'm not too used to reviewing graphic novels. Saga of the Swamp Thing is made up of the stories that Northampton based legend Alan Moore wrote. Book One is made up of issues 20-27, originally published as The Saga of The Swamp Thing back in 1984.

Now I'm not sure how much influence Moore had in changing the direction and motivations of the titular character here but this begins with quite a change. The first issue of the book, Loose Ends has the army hunting down Swamp Thing and eventually 'killing' him. It was a bit of a dizzying way to start and had a variety of characters who I had no idea about. As Moore took up writing duties mid-way through an ongoing story this explains why things begin already in progress. It is second issue, The Anatomy Lesson where things begin to change with the revelation that Swamp Thing isn't a former human somehow transformed into a plant creature, but instead a plant creature that took on the memories of a dying human. This brings an identity crisis that is only resolved when Dr. Woodrue, a man obsessed with becoming a plant, initiates a disaster that could spell the end for humanity. This begins in Swamped and continues over Another Green World eventually getting resolved in Roots. The second half of book one is about a demonic entity that is after a deadly monster that has latched itself onto a young orphan boy. This takes place over the remaining issues of The Sleep of Reason..., ...A Time of Running... and ...By Demons Driven! 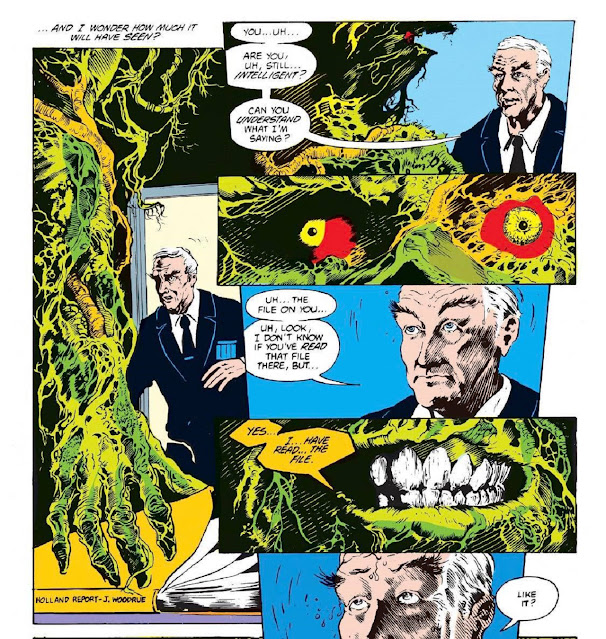 As a teen I picked up a bunch of random Swamp Thing comics that had him travelling through time. It was a wonderful series of stories and I admit my main hope for getting Saga of the Swamp Thing was that I would be able to locate that arc. Despite that not happening yet I still really enjoyed my time with this. I always thought this character was like the Captain Planet of comic book heroes, all his stories to do with saving the environment and not much more. I liked all the horror elements that this graphic novel brought. Both with the murderous villains and the style of the stories. The Anatomy Lesson felt like proper horror, Swamp Thing taking on the role of a silent antagonist hunting down his captor, the whole issue narrated by someone at that point not directly involved. The later demon influenced series of stories had some clever writing, in particular the sinister man (quite possibly a devil) who is able to see the grim fates of the people he meets, reminded me of Leland Gaunt from Needful Things, preceding it as that character didn't emerge until the early nineties.

The book ends with the main stories resolved but with plenty of loose plot threads left open to take the story in interesting directions, I'm especially interested to see what happens to Swamp Thing's human best friend Abbey's boyfriend. The art throughout this felt very eighties in style, in my opinion the art throughout that decade in comic books was excellent, they really don't make things as detailed as that era anymore sadly, at least with the big heroes. I did struggle at times to follow the story in that it was quite obtuse in how it all plays out, on occasion some of Moore's words seemed a bit melodramatic, such as when he relates the rain as if 'someone had taken a razor blade to the sky' or something similar. Still, I have Book Two ready to go and having enjoyed this one a lot I am excited to see where else this dark journey takes me.