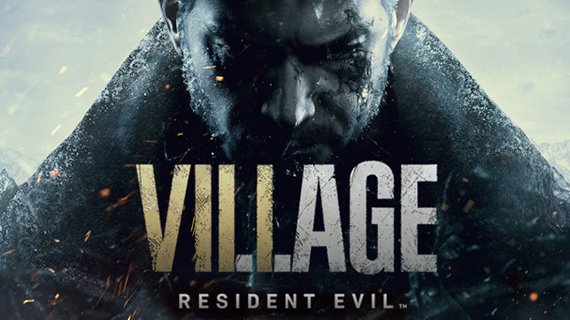 I really loved Resident Evil 7: Biohazard. I loved the shift to first person, I loved the return to a more survival horror focussed game, I loved the change up in the type of horror game it was, and I especially loved that it was playable in VR. That last part was something that stopped me immediately buying the follow up, Resident Evil Village as this one doesn't exist in a VR format. Having finally managed to get a hold of a Playstation 5, and seeing this on sale I decided to bite the bullet.

It is three years after the events of Biohazard and Ethan Winters and his wife Mia have, with Chris Redfield's help, moved to Europe in order to start a new life. In that time they have had a baby girl named Rose and things are almost perfect. One dark snowy night their peaceful existence is shattered when a group of soldiers, led by Redfield burst into the family home. They gun down Mia in cold blood and then kidnap both Ethan and Rose for reasons unknown. After being knocked out Ethan awakens to find himself in the middle of nowhere, a burning truck and corpses of soldiers nearby. He heads through a blizzard to a nearby village where he hopes he will be able to find help. Instead he discovers the place in ruins, the surviving villagers holed up in a barricaded building, with what appears to be werewolves prowling around outside. It isn't long before Ethan has been captured, this time by a woman known as 'Mother Maria' who the locals worship as a living God. Her, and her four 'children' are revealed to have Rose in their possession, so Ethan, escaping his captors, heads out in search of his missing child. 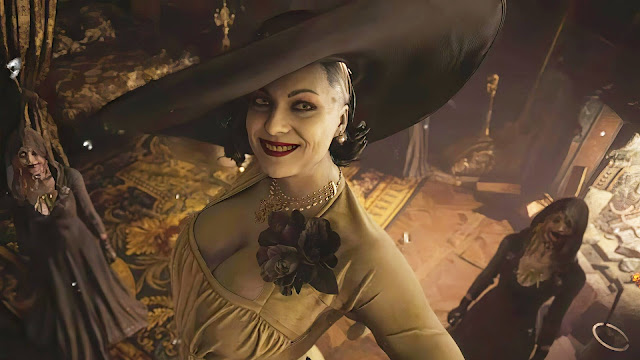 Resident Evil Village looks fantastic, that was my first impression of the game. It must be the power of the new generation of consoles as the lighting in particular was darn impressive. Heading from the bright and snowy outdoors to darkened interiors was a joy, due to the gradual change from light to dark. Character models and enemies also looked good, but then that was also true of the previous game. I feared I would lose a lot by not being in VR but that wasn't the case. Village has a lot more combat than the core game in Biohazard, too much so in fact by the games finale. For three quarters of the game however the balance between combat and exploration is spot on, is just a shame it devolves into a very linear action packed final act that did eat away at my overall enjoyment.

As a sequel to Biohazard this is again played out in a first person perspective. The survival aspect worked well as there was never a time in the game's first half where I felt like I had too much ammo, instead I always had just enough. Dotted around the environments are countless parts you can collect, these can then be used on a subscreen to create healing items, ammo, and various explosives. Key to the gameplay loop here is the enigmatic travelling merchant, a hugely obese man who seems to know a lot more than what he lets on. You can sell items to him, including any treasures you find. With the money he gives you, and which you can find in the game world, you can buy upgrades for your various weapons, as well as buy a whole bunch of stuff off of him, such as additional parts to attach to your guns. You also get the option later to give him various types of meat with which he can create meals that permanently upgrade Ethan's stats, such as more health, and the ability to take less damage when blocking. An issue I had with this part is that by the time the merchant gives you the option for him to cook for you I had already missed out on a few unique opportunities to harvest the finite creatures, meaning I wasn't able to get all the upgrades. 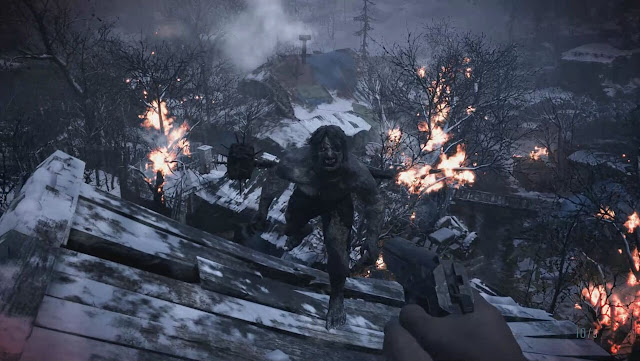 I remember the initial trailer for Village was so crazy that people didn't even clock on it was a Resident Evil game. This is a game heavily set in a game of fairytale creatures. It's telling that the game opens on a fairytale being recited, as within this you encounter werewolves, vampires, witches and fishmen. Bizarrely by the end of the game the rationale for their existence is all revealed. These enemies all each appear just in their own areas. As the title would imply, the village is central to the game, literally so. It acts as a hub area with which you can head out to each of the four different areas (and a secret fifth one). The first of these areas also happened to be the best, a sprawling castle that had some fantastic design to it, as well as featuring a variety of medieval zombie like foes and the iconic Lady Dimitrescu, an extremely tall elegant woman who featured in all the pre-release trailers. After this, Village still impressed but never quite as much. The other areas (including an isolated cottage, a flooded village, and some ruins) were all in their own way a joy to play through, but much smaller in size. The quality of the level design never faltered though, at least not until the final part of the game. In fact, some of these other areas really did some cool things. The cottage was once such divergence from the typical Resident Evil formula, it consisted half of a large escape room which was something similar to the Banned Footage DLC and Lucas's segment of Biohazard, but more interestingly a part that would not have remotely felt out of place in a Silent Hill game. Surely the most demonically supernatural feeling part of any Resident Evil game up to this point.

I appreciated how non-linear a lot of the game felt, sure you are ferreted from location to location for the main story beats, but the village hub area felt quite open in what you were able to do in what order. I was prepared for a shorter game than Biohazard's twenty plus hour campaign, my final time here on an initial playthrough was just over nine hours which I was pleased with. The story was also fun, there were some good little twists here that were a bit meta, somehow managing to explain away some of the contrivances that are needed in order to make this a video game as opposed to a movie. Once again going back to my main complaint however is that final part of the game. After having such intricately crafted levels, going to a more arcadey shooting gallery for a final half hour or so was underwhelming and not very welcome. All in all though I would be lying if I didn't say I had a heck of a lot of fun playing Resident Evil Village, I'm glad I finally got around to doing so.

Posted by Daniel Simmonds at 03:31