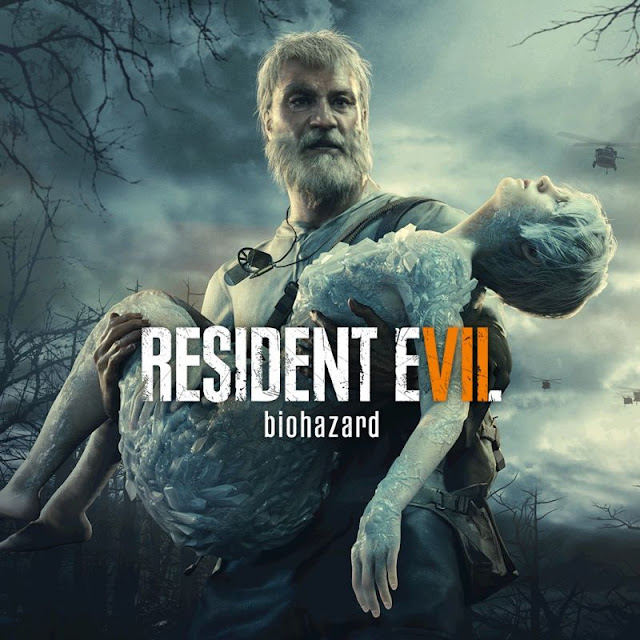 After finishing the enjoyable Not A Hero DLC story for Resident Evil 7: Biohazard I had high hopes for End of Zoe. This one wasn't free after all so I imagined it would be bigger and better than Chris's campaign. Sadly though this may have some good moments but for the most part it is an exercise in supreme frustration.

Several months after the events of the game and hillbilly Joe, the brother of Jack, arrives at the swamp the main game took place at. He discovers his niece Zoe now in a monstrous form and assumes the nearby soldiers are the cause of this (they are actually there to help, arriving along with Chris Redfield at the end of the main game's story). He takes them captive and learns that there is a vaccine that may return Zoe to normal. Setting out into the swamp in search of this cure he discovers that there are plenty of monsters around, and also finds himself pursued by a powerful swamp creature who may just have a link to his past. 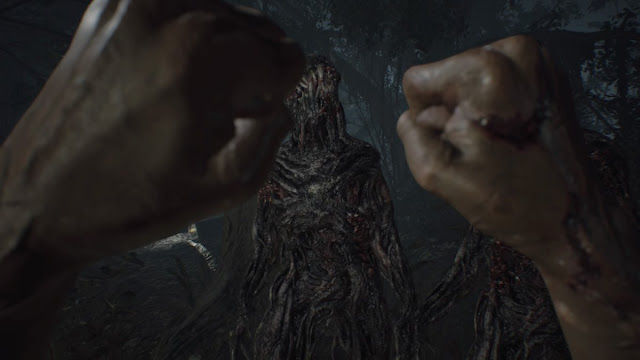 Going into this I knew that the combat for End of Zoe was all melee focussed with no guns to be found. I imagined somewhat foolishly that this meant I would be a powerful character. That isn't the case, a good eighty percent of this was stealth based misery. The game isn't built for stealth and so most of my two hour run time was spent repeating the same sections over and over again. It doesn't help that while crouched or while in the swamp you move at the speed of a snail. Repeatedly dying and having to slowly repeat the process over and over was not fun at all. Even worse are the alligator enemies. These are set up like puzzles, you have limited resources (a crafted single use spear is the only weapon capable of killing them) and should you kill the wrong one at the wrong time it will mean it isn't possible to proceed due to a lack of weapons. I wish the spears respawned, as doing a five minute section only to realise it is impossible to proceed was zero fun, it doesn't help that the targeting reticule for the spears lies to you, what seems like a sure fire attack will see your spear sailing off into the distance.

The typical molded are fine to fight, punches to the head disrupt their attacks and in theory knocking them over results in you being able to do an instant kill attack. Annoyingly the prompt for doing this only seemed to appear half the time, and should you be fighting more than one enemy at a time then the game gets confused and removes this mechanic entirely. The alligators can only be killed using spears (the loading screen tool tip lies to you about this), and then there are the crawling molded. One of the weakest enemies in the base game, here they can kill you in two hits, as well as jump out of the way of all your punches. There are two boss fights to be had, both against the same enemy but in different circumstances. They were not bad, but I was glad when they were over. The story is minimal but it was cool to get to go back to the mansion and old house from the main game and see the changes that have been made to them. You eventually get a power glove that increases your punch damage, but it is so near the end that you only get one room of empowerment, would have been better to get that early on. 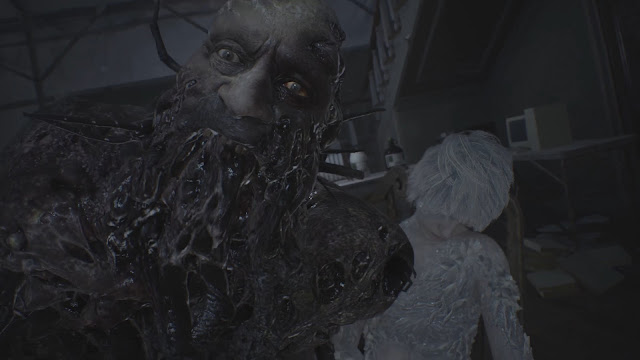 End of Zoe was ruined due to the reliance on stealth, it shows that it is at its best in the few moments you don't need to agonisingly crawl about hoping the invisible area of sight won't result in sudden death. The game is built on trial and error, I would be very surprised to know anyone was able to do this first time as it seems designed to instant kill you if you don't follow a strict process. After Not A Hero I liked it enough to want to do it again at some point in the future. Not so with End of Zoe, while it had a few good parts, mostly this was stunningly frustrating and a real sour way to end my time with Resident Evil 7.