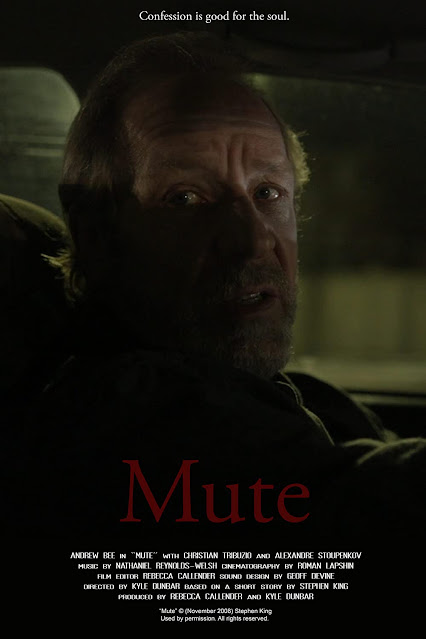 A good many years ago I read a Stephen King book that was made up of many short stories he had written. Leaving that I was convinced he was straight up not good at a reduced format. Mute is a new short horror film, directed by and with a screenplay by Kyle Dunbar, the story was an adaptation of a King short of the same name written in 2008. I'm happy to report that this exceeded my expectations.

Monette (Andrew Bee - Suicide Squad), a middle aged travelling salesman, arrives at the church of a Catholic priest (Christian Tribuzio) one day, wanting to confess his sins. This is something he hasn't done since he was a child, but he fears he may have possibly committed a terrible sin. Monette then recounts a chilling tale that all started when he picked up a deaf and mute hitchhiker (Alexandre Stoupenkov - Terminator: Tech-Com) one dark night while travelling on the road. 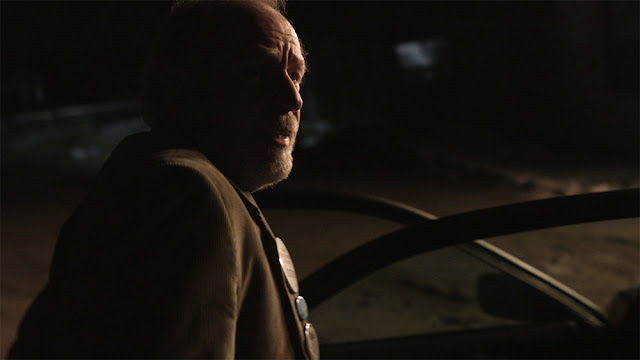 I loved this film, the story was a perfect fit for its twenty two minute run time. Firstly I do love the plot device of a character in the present talking about a past event that then becomes the main part of the movie. I always find this really hooks me in, and with the intriguing angle of a man unsure whether he had done something terrible or not I needed to know how everything would all turn out. The majority of the film has Monette travelling in his car as he complains about his cheating wife to the hitchhiker who appears unable to hear him. He finds it soothing to be able to speak aloud all his troubles to someone, even if they can't actually hear his words. Every now and again the film goes back to the present, these were made humorous due to the priest having a dinner date planned and so wants Monette to hurry up with his recollection. Of course Mute finishes in the present, leading up to a fantastic ending shot.

The story is mainly shown with the camera on Bee as he speaks, the dialogue was interesting enough that it didn't matter there was no deeper visual context to the things he speaks about, outside of one part where a walk in closet is shown when he mentions it. Despite just being speaking I found myself a little bit chilled with the revelation that comes at Mute's end.

With a perfectly chosen cast and a story that would only ever work in a short format, Mute was a great film, a reminder that it is not good to speak too much, especially if it is to complete strangers. Mute had its world premiere at the London Rocks Film Festival on October 20th.

Thank you very much for this review. We loved filming Mute.

No trouble at all, it was a joy watching this, you were well cast!