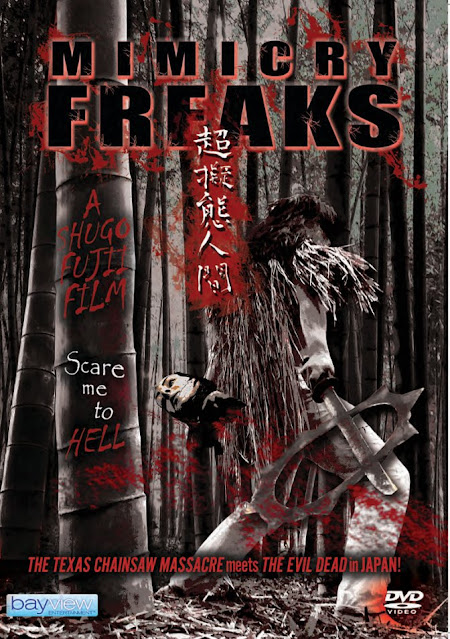 You have to love a bit of Asian body horror, and that is what you get with Mimicry Freaks. This was written and directed by Shugo Fujii (Living Hell) and is quite messed up. Unfortunately the screener I watched only had subtitles using the 'closed caption' feature and so I had to translate in my head a lot of the garbled English subtitles I was being provided with. That isn't a fault of the film itself so I will try not to let that part of this affect my review.

In a secret lab in the middle of a vast Japanese forest a young deranged child has escaped, this child has the ability to take on the form of any other human it comes into contact with. Meanwhile, a wedding planner, a young man, his girlfriend and her father are on their way to a wedding rehearsal when the car they are travelling in breaks down. They head to a house they spot in the nearby forest, but on the way are attacked by a hulking figure dressed up like a mythological Japanese monster. 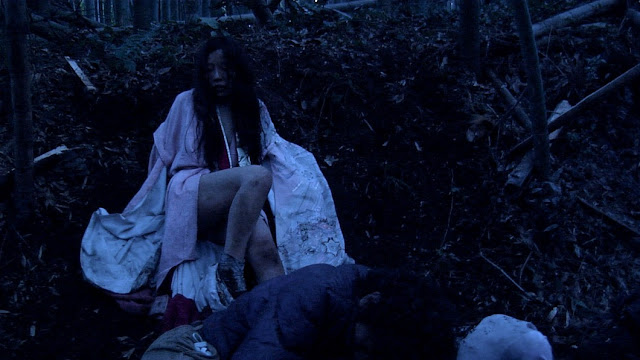 Mimicry Freaks doesn't try and tell its story in a linear fashion, instead it hops around a bit in time every now and again. It felt like it was designed to feel like a nightmare and incorporates into the picture physical manifestations of various character's hallucinations. This all adds up to it never being completely clear exactly what is going on. The core story is about Ren, the small boy, and the scientists who are trying to recapture him. The wedding planner story is a subplot that brings with it its own horror, the giant masked man and the way he carries himself reminded me a lot of Leatherface from The Texas Chainsaw Massacre. That may be fitting as IMDB states the tagline for this movie is 'The America style horror that can only be made in Japan'. I think the style gone for here was to recreate an American feeling horror but with a Japanese twist as that suggests. That can surely be seen with the amount of body horror going on.

With lots of fun and inventive effects many of the characters here suffer nasty and gory fates. Early on someone gets their face sliced off vertically, other moments include someone getting repeatedly shot in the chest with a nail gun, a hatchet to the face, and even someone who is literally ripped entirely in half! Then there are the characters who are forced into a 'mating' machine, and someone trapped in quicksand who discovers the 'rope' he is using to try and pull himself out is actually the intestines of a nearby character who was recently disembowelled!The fates of most the characters are grim with no one escaping unscathed. The effects mostly seemed practical and were fun to see play out, due to the variation on display I was never too sure what was going to occur next. I liked how the main story and the sub plot both had their separate types of horror going on, and how they eventually intersect.

The films somewhat hard to follow story was made all the more nightmarish by the effects used, particularly with the editing that has footage sometimes switch to a blood red colour, or to glitch out as if the film has gotten stuck. This was mainly used for the hallucination sequences, and to show Ren transition into a new form. Even with the hard to understand subtitles I got a good bead on how the story progressed, the slight groundhog day feel of one of the characters making things a tiny bit more complicated, but overall it wasn't as difficult to fathom as it may want you to believe.

Mimicry Freaks was a bloody and violent horror that had a lot of crazy ideas, perhaps let down by not a single likeable protagonist this nonetheless was a wild ride to experience. Mimicry Freaks came to DVD and Digital on October 19th from Bayview Entertainment and TMA Releasing.