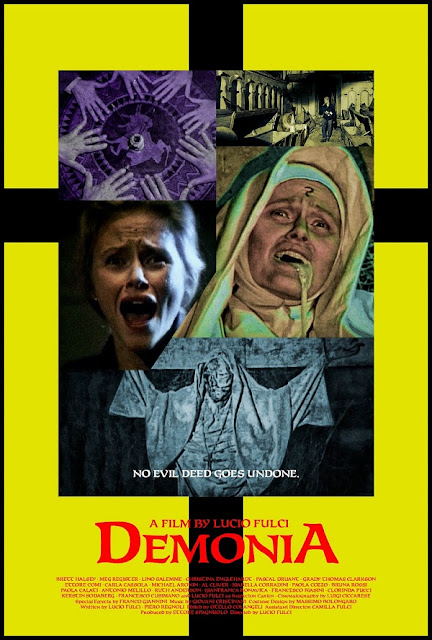 Lucio Fulci is a legendary Italian horror director responsible for such films as Don't Torture a Duckling, Zombie Flesh Eaters and City of the Living Dead. I haven't seen too many of his films so jumped at a chance to get to see his 1990 horror Demonia. This film has been said to be one of his worst, the 4.6/10 rating on IMDB might attest to that. Despite a bit of a muddled story this was plenty enough enjoyable.
While at a séance, Liza Harris (Meg Register) has a vision of a group of nuns in the 15th Century being dragged into a hidden temple and crucified by an angry mob. Several months later Liza is on an archaeological dig in Sicily and realises that the nearby ruins of an old monastery is the same place from her visions. She is warned about going into the place due to the superstitious locals wanting to keep people out of there, but she ignores the warnings. During her exploration she discovers a secret chamber in which she finds the skeletal remains of the crucified nuns. Liza becomes obsessed with finding out exactly what happened. Meanwhile, people begin to die in mysterious ways, seemingly caused by a ghostly nun. 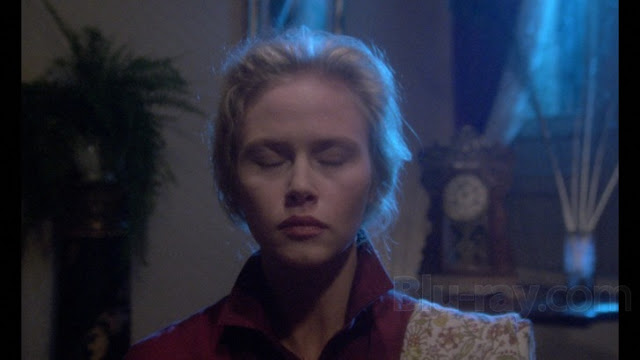 Demonia combines elements of both the demonic and nunsploitation sub-genres of horror. This was a really easy film to watch, so much so that it was over halfway through its ninety minute run time that I realised how much of the film had passed. The story is the weakest element, but to me that wasn't an issue. There wasn't much of a story with the events mostly inferred and merged with repeating flashbacks to the crucifixions from the prologue. The Fulci films I have seen have always had a dreamlike quality to them, this was no different at all. The cruel and unusual way people die in the film added to this feeling. Especially with some of the victims who meet their end most suddenly. My favourite was a man out looking for his missing child, one scene he is perfectly fine, then the next time we see him a minute or so later he has inexplicably gotten caught up in some convoluted rope trap that when activated completely rips him in half down the middle!
The special effects didn't always look fantastic, but they are all totally practical ones and so even the dodgy moments I really appreciated. From a woman being mauled by cats that look extremely fake, to people falling into a pit of spikes but looking very much like a dummies. The variation of these kill scenes were lovely, and the ghostly laugh of the spectral nun combined all the disparate and random ways the victims met their end. Some of them are bloody, especially when bodies are pierced by blades and nails, others seemed weirdly bloodless that just added to the artificial look. 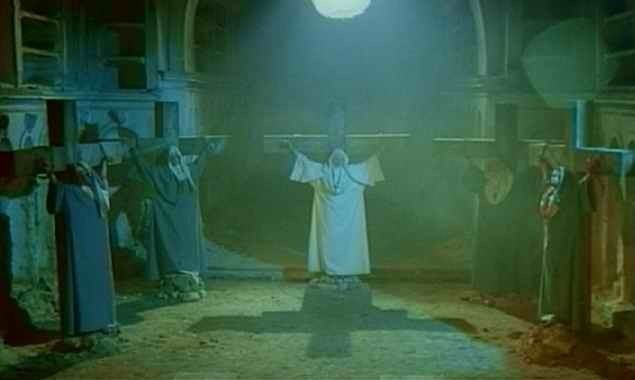 The version I saw of this was the English dub, it was as you would expect, some scenes made more humorous due to this dubbing, especially a scene involving a boy searching for his father. There were a whole bunch of characters, none really left much of an impression outside of Liza, and a local butcher who had a really intense look due to some thick eyebrows he was sporting. There was a subplot of an Interpol agent investigating the murders but this didn't really go anywhere at all.
I found Demonia a hard film to dislike, sure it doesn't really make too much sense, but the body count is both varied and steadily rises so there is never a dull moment to be found. Demonia arrived on the Arrow streaming subscription service on October 11th.
SCORE: