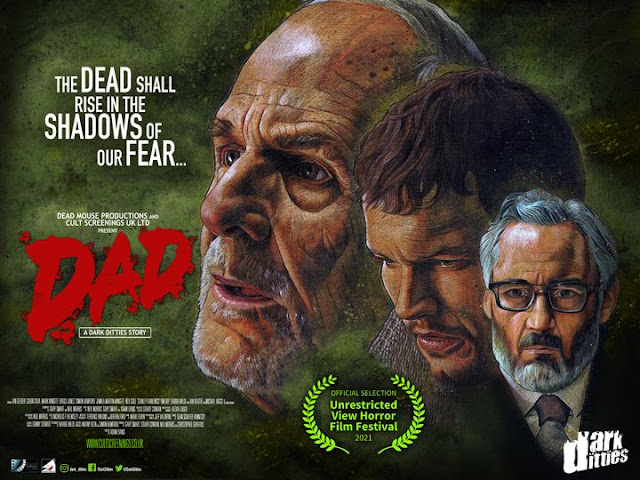 Dark Ditties Presents describes itself as '...a very British dark, comedy-horror anthology series'. Each episode brings returning actors playing different roles in a similar style to American Horror Story, and all seem to at least somewhat be tangentially related to each other. Previous episodes include The Offer, Mrs. Wiltshire, Finders Keepers, and The Witching Hour, with Dad being the fifth one. Dad is a zombie story based in England, which I noticed in the end credits was part filmed in Northampton. It was cool to see something about the undead had been partly created in my hometown!

Zombie apocalypse has swept the globe, seemingly as a result of a popular cultish new religion. David (Corin Silva - Dark Ditties Presents: The Witching Hour) has been not only trying his best to survive, but also doing his best to take care of his dementia suffering father, Terry (Game of Thrones). His Dad doesn't understand that the world has fallen to ruin, he doesn't even recognise David, who he assumes to be his carer. After meeting up with some other survivors, crooks Jerry (Bruce Jones) and Steve (Neil Cole), as well as the cowardly Keith (Simon Bamford - Hellraiser), they are all attacked by zombies and end up fleeing to a large country house they spot. This home is where the Reverend Alistair O'Brian (Mark Wingett - Dead Again) and his daughter, Elizabeth (Jamila Wingett) live. As is often the case, while the survivors think they are safe now they have escaped the undead the real threat may come from the living.

A lazy way to sum this up would be to imagine 28 Days Later if the group had arrived at the mansion right away rather than at film's end, and if instead of a squad of soldiers there was a crazed God fearing priest. Much of the film is heavy on dialogue with the undead relegated to a few key scenes. A lot of this conversation is around people having lost loved ones, such as Keith's admittance of what happened with his family, to David talking about bad past encounters he has had with other humans. The heart of the episode comes with David's interactions with his father. Searching my memory I don't think I have ever seen a piece of zombie media in which there is a character suffering debilitating dementia. There was a believable rapport between the two, the cruel disease  has made David's survival so much harder due to having to constantly be watching over his Dad, who as far as he is concerned has just gone off on a trip. Terry could have been an annoyance but instead he worked to really show the heartache that David is going through.

It was no great surprise to learn that Alistair was the human antagonist of the episode. It was a cool touch that this character appears in the prologue in which 'patient zero', in this case a priest from the new religious group, kills himself on live TV during a debate with Alistair, seemingly to usher in a sudden undead uprising. Wingett plays the role in an over the top way, but an enjoyable portrayal that made him into a fun bad guy. Much of the episode takes place within the mansion, with the undead trapped outside, but things of course begin to fall apart. There are slight clichés, such as David getting infected early on and trying to conceal his injuries, but things like this are given a new breath of air in that David is very concerned what will happen to his father. His aim starts to become trying to find a way that his dad will be looked after once he has gone. I haven't seen other episodes, but this one fits the bill of being dark, though this was not a comedy horror, this was drama mixed with horror. One element that worked surprisingly well was that whenever David is knocked out or sleeping he finds himself in the office of a creepy psychiatrist, Dr, Edward Brunner. This character's therapy sessions with David reveals hidden information about him, as well as provides a clean way for his inner thoughts to be expressed on film. This could have came across as silly, but I enjoyed them. It felt similar to a concept used in both the Silent Hill: Shattered Memories and Until Dawn videogames. It was these parts that I think most shared ideas that other episodes have featured, especially with the constant referral to a possibly demonic figure.

Watching Dad as a standalone film, rather than taking it as part of an ongoing series I still found this to be very enjoyable. The acting was all of a high standard and I loved the new ideas that were brought to the genre. Despite some lack lustre make-up effects on the undead this was impressive stuff indeed and well worth a watch. Dark Ditties Presents is available to watch on both Amazon Prime and Vimeo.

Posted by Daniel Simmonds at 15:45