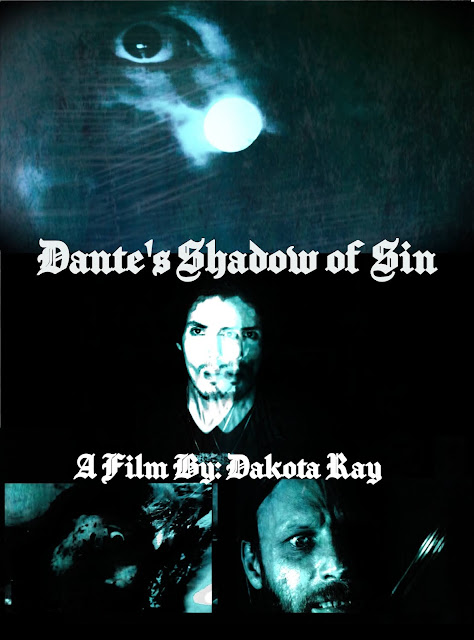 It is another year and another film from Denver based indie filmmaker Dakota Ray (Sebastian's Unholy Flesh, The Dark Days of Demetrius). That is no bad thing as Ray's films really have a unique style to them that sets them apart from nearly anything else. Dante's Shadow of Sin is the eighth film. While again it features Ray in a starring role as a depraved serial killer, this time around the story is a lot more focussed and a little less abstract.

Dante (Ray) is a man who for the past two years has been strangely haunted by his murder of a young woman. When he gets a letter out of the blue from an old acquaintance, Mahoganny (Fred Epstein -  American Scumbags, The Acid Sorcerer), with an invite to the property that happens to be where the woman's corpse was buried, Dante sees this as a sign. Determined to confront his past, he decides to meet up with his buddy, planning to kill him off in order to finally put those events to rest. Unknown to him however is that Mahoganny likewise intends to murder Dante. Over the course of one drug fuelled night the two both start to enact their sinister plans. 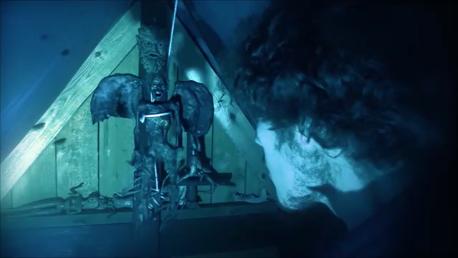 There is usually a colour tint to the whole of Ray's movies and this is no exception. This time around everything is an electric blue colour. As well as giving it a unique look this also creates a strange atmosphere. From start to finish this has the feel of a pervading nightmare which even feeds into the flow of the story. Despite Dante and Mahoganny being at the house to have a wild night together they actually rarely are in the same place at the same time, both off doing their own thing. Over time these films have gone from a more grounded nihilistic look at a depraved world into one that has more supernatural overtones. Here it is never implied what is real and what isn't, but you have various totems speaking to the two characters, revealing secrets about their lives. The cursed doll that Dante receives in the post, and a demonic figurine both speak to him, while the corpse of a white rabbit reveals to Mahoganny secrets about his friend's real intentions.

While Dante is the protagonist, Epsteins's character also gets plenty of screen time, this character even gets his own monologues. No one does wild eyed stares and demented grins like this actor does and here he gets to do plenty of those. If this had been straightforwardly shot then his comedic over the top way of speaking may have been distracting, but it all fits neatly into the nightmare that the film feels like. There were a few other characters in the movie, outside of the talking items but they didn't get to do too much. Mahoganny's grandma (Maddison M.) had plenty of potential, especially when Dante is instructed to look after her for a bit, something that is bound to go terribly. One scene later however and she is out the film without really having added anything. The same can almost be said for Sholeh Behesht who plays a kidnapped victim of Mahoganny's tied up in his bathtub. Visually this character fitted in very well but was more of a prop than anything. Saying that though, all the scenes she was in were enjoyable, I especially liked the pleasure that appeared on Dante's face when he first finds out about the woman.

Dante's Shadow of Sin as always was an experience. With each new film comes growing skill in the way they are created, here is no different. A more stream lined story and with screen time split between two main characters, this was once again a dark trip into a cruel Hell which creates a vibe that few other films can manage.