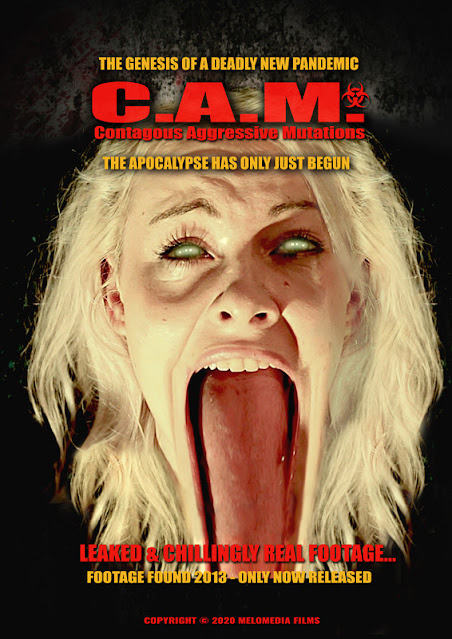 C.A.M is a found footage horror written and co-directed by Steph Du Melo (As A Prelude to Fear) along with Larry Downing. I was surprised to see this was released in 2013 as it felt strangely prescient to what the world has gone through in the past couple of years. Here you have a contagious virus spread via airborne particles, with the infected exhibiting flu like symptoms. This would also be an anti-vaxxers wet dream as this very much plays along the lines of any kind of vaccine for a viral outbreak perhaps having sinister side effects.

The film is set out as a mockumentary about a viral outbreak at a remote meat packing plant that was covered up by the government. The host, titled as Alt Media Interviewer has managed to get hold of an exclusive interview with a medical worker (Michael Swatton) who was on the scene. Intercut with this interview the found footage from a camera crew and special forces police squad has been pieced together to show the real events of what happened. The two camera operators, Jo (Charlotte Curwood) and Kyle (Tom Ware) had been hired to follow the special forces squad into the containment zone in order to make it look to any outsiders like it was just a training exercise that was going on. It soon becomes clear that something terrible is unfolding, the squad encounter extremely aggressive infected people who attack them on sight. With radio contact to outside the quarantine zone cut off, the squad must find a way to escape the madness. 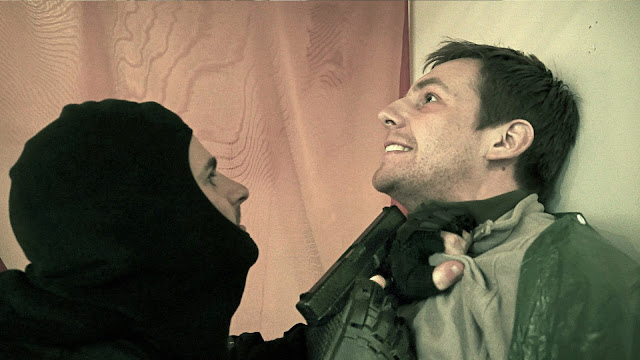 There some elements of C.A.M that I really liked and some parts that I wish in a modern day setting to remain confined to the old style of found footage horrors. There is lots and lots of shaky hand cam footage here that legitimately made me feel queasy, I had just drank a strong cup of coffee when watching this so that added to my sick feeling. Thankfully the shaky hand cam only makes up around a quarter of the film as a whole, but whenever Jo or Kyle became the people the film was following I had to frequently look away from it. What worked much much better was the police squad's helmet cam. This footage looked fantastic, for one thing it was a whole lot less shaky, but it also brought you into the story a whole lot more than camera operators. I kind of got to wishing that Jo and Kyle had been cut out completely as the police squad were great characters, I got a vague feel for the team from the original Resident Evil movie. Characters such as 'Princess' (Jamie Langlands - As A Prelude to Fear) and 'Maggot' (Daniel Jeary), as well as their commanding officer with the ever pixelated out face were fun to follow around. I love their initial hesitance to use firearms on the defenceless infected civilians, often resorting to their batons to beat people back, I also loved how they slowly begin to lose their cool as the events of the film progress.

This all leads up to the standout moments in C.A.M, the action scenes. These are few and far between but they were a real joy to watch. Gunfire is done via CG but it looked good, there was one scene where infected lit in shadows are assaulting a building, this also appeared to be CG but was much better quality than you may expect, had me fooled for a moment or two. These parts are where the found footage worked really well, such as a camera falling to the floor on its side, showing random legs running past the field of view, and random gunfire bursting out in the background. As to the infected themselves, they look fine, nothing special outside of some milky white contact lenses. There isn't too much blood but it looked decent enough. The flipside of these sudden outbursts of violence is the downtime that pervades the second act. The first act had my attention as I was never sure what was going on. Right about the middle things began to drag slightly with a lot of characters hanging around not doing too much. Things do pick up for the third act, it all ends nicely...then carries on past when it really should have finished. First there is an overlong series of random real life quotes, everyone from Prince Philip to biblical verses and even Nicolas Cage gets quoted. Again I expected this to close off the movie, but then we get a third ending in which the mockumentary aspect is closed. Then there is yet another ending on top of this, this one having some interesting ideas but let down by some poor looking CG. With each subsequent false finish I found myself getting more and more impatient for the actual credits. 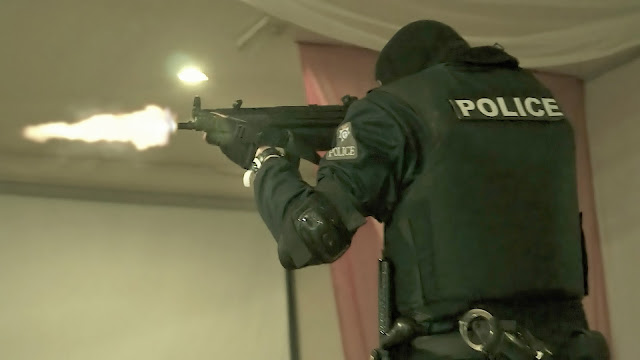 Like all good found footage films we are told that the events recorded actually happened. The wraparound segment consisting of the documentary was a good way to tie it all together, and that actually explains away some of the smaller issues. The too many quotes part for instance can be said to be a fault of the creator of the documentary rather than the real life creators, that can also explain away the music choices. I loved that C.A.M had a proper soundtrack, it added a lot of atmosphere and excitement and fitted due to the documentary the found footage was presented within. I do wish one certain track had not been used as much as it became a bit dull and generic sounding due to overuse by the end. The acting is a style that didn't feel realistic. That isn't to say it was bad, more that it would be very unlikely anyone would have confused this for real life footage. I enjoyed the acting personally, it gave a lot of life to the characters in the film world.

While there were parts of the film I didn't like, my overall lasting impression of C.A.M was positive. The majority of the characters I enjoyed watching, the biggest issue for me was the outdated shaky camera footage. Other parts really did work well. I loved that the film was said to be degraded in areas, leading to distorted audio and subtitles for various scenes, never overused thankfully. The few attempts at jump scares fell flat, but the decent action scenes made up for this. Zombie films are always going to have a place in my heart, so was a lot to enjoy here.