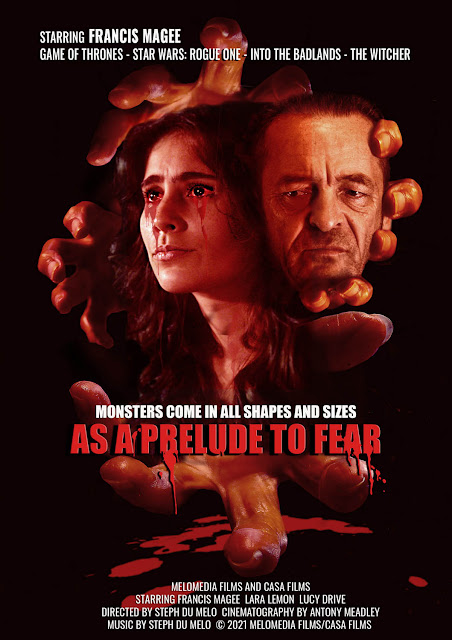 There is something about British indie films that make them seem all the more indie, I think I put it down to the regional accents that I am so used to hearing on soaps on TV that makes these films seem cheesier. The Steph Du Melo (C.A.M) directed and co-written As A Prelude to Fear is one such example, maybe it was due to me having low hopes, but I found this to be pretty decent, and I soon found myself fully on board looking forward to how it would all play out.

Eve (Lara Lemon) is a young woman who has arranged to get cello lessons with a new tutor, after the last one, Giles Corcoran (Roger Wyatt - C.A.M) drove her away due to his nasty personality. She chose the wrong person though as when she arrives at the remote location she was told to head to, she is drugged and kidnapped. She wakes up in a basement dungeon where another girl in a similar situation tells her that she must obey the rules of her captor if she wants to survive. Meanwhile, Eve's worried boyfriend Jaime (Jamie Langlands) has contacted the police, and after D.S Dobson (Lucy Drive - Zombie Massacre 2: Reich of the Dead) hears of this she notices similarities with an older case and contacts her superior, DCS Barnbrook (Francis Magee - The Witcher, Game of Thrones). This man is obsessed with a suspected serial killer the media dubbed The Pied Piper, so much so that it almost destroyed his career in the past due to his dogged harassment of the sole suspect, none other than Corcoran. Now Barnbrook once again convinced of the man's guilt sets out to right the wrongs of the past and finally bring justice to the suspected killer. 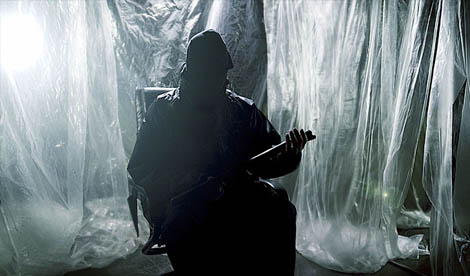 So story wise I thought it was very obvious who the killer's identity turned out to be. It was however a fun choice and so I really didn't mind that it didn't take too much brain power to deduct. There were two stand out actors here and one of those was Wyatt. He plays such a despicable character so well, I hated this guy and thought to myself even if it turned out he wasn't responsible he still deserved any bad thing that came his way. That was the desired effect so it is good that the role was played exactly right. Another stand out actor here was Magee, I loved his Barnbrook character. He is as cliché as they come, even having a typical talk with Dobson about not letting the job take over her life. His whole countenance was excellent, he really did look like every jaded detective you have ever seen in a film or show. That wasn't a bad thing though as he stole all his scenes. Other characters were not all as strong and that is down at times to what I assume is budget constraints and how the story plays out.

After a strong intro in which a captured woman is tortured and killed I expected the Eve plot would be quite dark. It is instead one of the weaker parts of As A Prelude to Fear. The masked killer is kept a mystery as they are in dark clothes and have a distorted voice. The voice was one issue, it reminded me a lot of Dr. Claw from the Inspector Gadget cartoons, so was hard to take seriously. They also seemed to have a bark worse than their bite, full of threats yet it is only insinuated what they do, with all the bad stuff mainly happening not just off camera but fully off scene. It made it hard to be too concerned about Eve and the other captives so it was a good job the policing side was a lot more engaging. Special effects are kept to a minimum but the ones you did get to see worked well, the blood was maybe a bit too thick looking but its inclusion was still welcome. 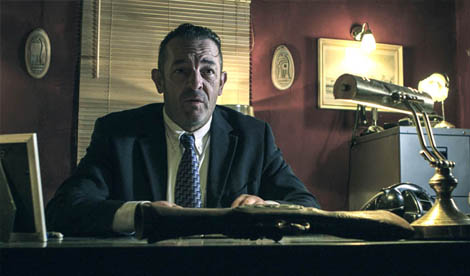 If it wasn't for the whole detective side of the movie this wouldn't have been anywhere as near enjoyable as it was. Wyatt and Magee were such fun characters that they made what could have been a generic storyline actually pretty fun. It was a shame that the same couldn't be said for the Eve storyline, it just never felt like she was in as much danger as the film would want you to believe. I also didn't like how this all ended, there was no explanation for the motives of the killer, instead choosing to end on a series of statistics about real life missing person cases. Regardless of those issues I enjoyed my time with As A Prelude to Fear, more than I expected I would.