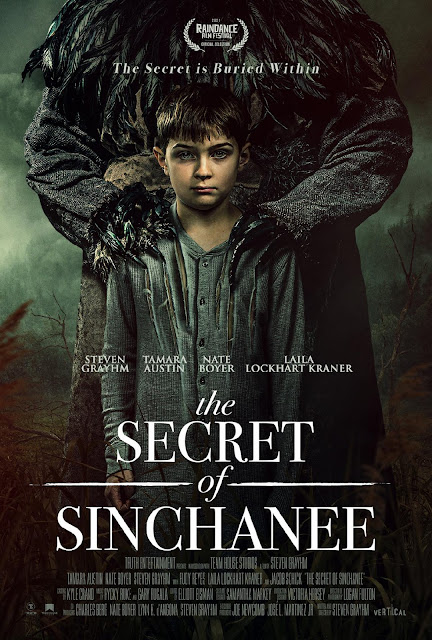 I had a really bizarre time while watching The Secret of Sinchanee. For whatever reason I just could not take in what I was watching, after an hour had passed I realised with some creeping dread that I would be hard pressed to even put together a full sentence that explained what the plot was. At one point my computer crashed and I had to reset it, but for the life of me I could not work out where I had got up to in the movie. It's a shame, and I think that shame is on me as this was competently made and with the exception of a couple of the younger roles it seemed to be well acted. Usually I am fine with films that are slow burning, but for me the glacier pace of this film just didn't work at keeping me within its world.
It all starts off with a black screen with white text. This explains that there was a tribe of Native Americans known as the Sinchanee, this tribe were mixed race and found to be immune to all the diseases that other tribes suffered after exposure to the European settlers. They ended up nearly being wiped out thanks to a devil worshipping cult that came over to the Americas with the first settlers. Fast forward to 1995 and a boy called Will, out in the woods with his sister disturbs an old grave site and takes an arrow head he finds there. It turns out this may not have been a wise move as the boy's family life takes a dark turn, perhaps due to some kind of curse. Now, in modern day and after his estranged father dies, Will (Steven Grayhm who also wrote and directed this), returns to his childhood home after the house ends up his property. Meanwhile Detective Carrie (Tamara Austin) and her partner (and ex romantic partner) Drew (Nate Boyer) are investigating the death of a woman found with strange marks branded into her skin.

I was banking on the third act bringing me up to speed on what had been going on. There is a definite supernatural element to the movie, as it seems an old demon (voiced by Mark Oliver) is residing in the woods and has the power to corrupt vulnerable people. As a side note the effects used on the voice made this character sound like Dr. Claw from the old Inspector Gadget cartoons, so that was the image that popped into my mind whenever it spoke. There are various subplots going on, obviously there is the detective investigation that links up the various subplots, then there is also Will's descent to the dark side as he becomes influenced by the devil. Then there are frequent flashbacks to 1995 where the trouble all began for Will's family. Thankfully the acting is one of the stronger elements. It was interesting to learn during the end credits that twelve different military veterans worked on the film. It gives the parts that deal with PTSD a more realistic feel to them. That may have been where some of the disconnect came for me. The film is told so seriously and comes off almost like a drama. But then there are the supernatural elements that didn't seem to fit the vibe that well. Early on there almost seemed the suggestion that everything going on was due to mental health reasons, but the firm step into the side of fictional horror dispels this.
The look of the film was also another strong part of this. The snowy woodland setting looked wonderful on camera, there are the drones shots that you should always expect in films nowadays, but they lead to some lovely cinematography. All over the scenery looked great on camera, and the sparse set designs did a lot with a little. Going back to the story though, however nice this looked and however well acted it was I just could not for the life of me engage with the story. There came a bit when a character was running around in a panic and I felt for the character, but I was unsure why they were so upset.

With a slow moving story that paces itself out over nearly two hours there is still a lot going on. For me I found the good acting to almost be to the detriment of the somewhat more goofy story of possessed people and a demonic little girl dressed as a ballerina. Despite my issues this looked lovely on film, and was the type of slow burning and quiet movie that would be perfect to watch close to bedtime due to a certain kind of hypnotic charm. The Secret of Sinchanee comes to VOD and Digital HD on October 8th.
SCORE: